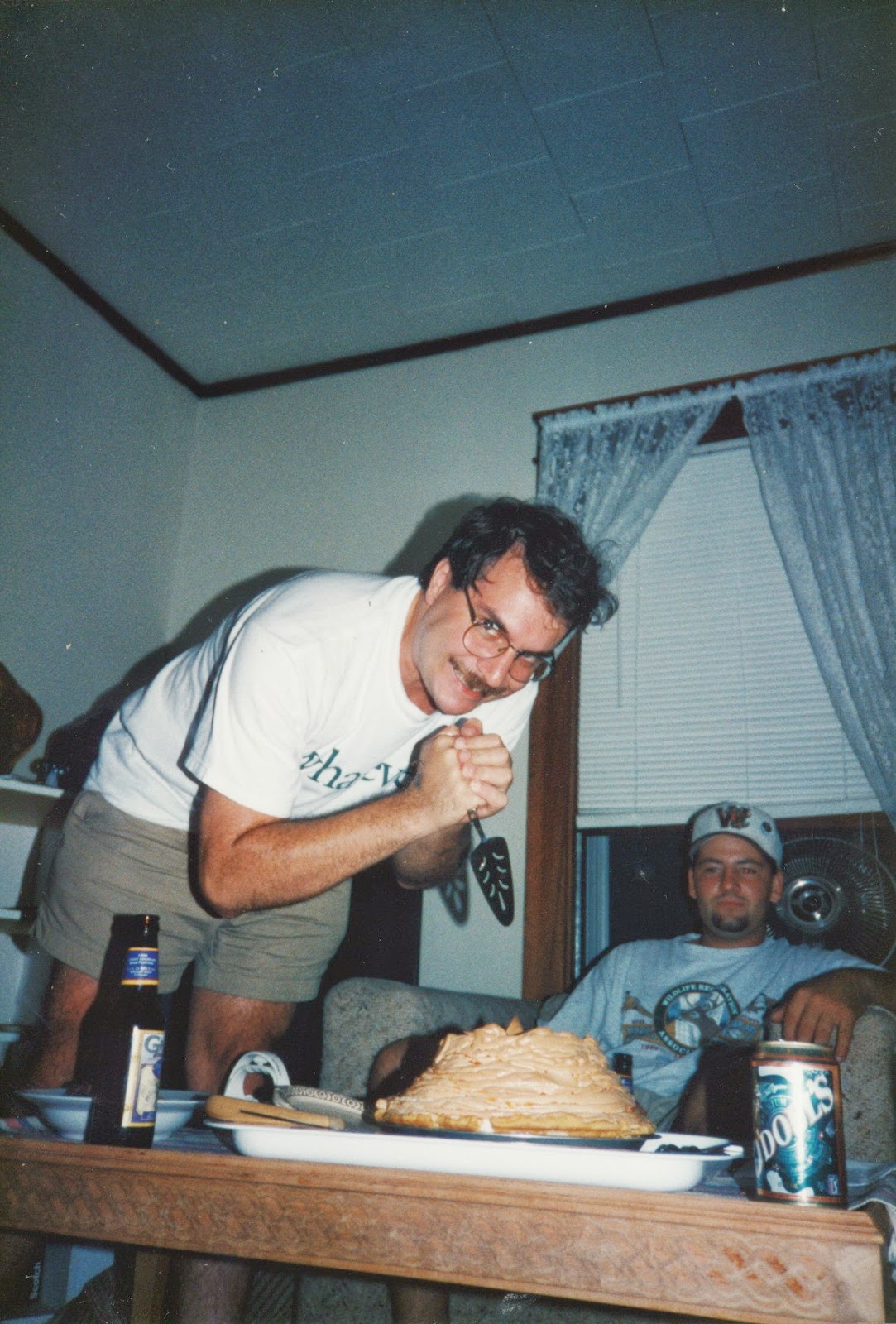 This is about as fierce as I get most days, threatening baked goods with rounded implements.  But as I said to a friend on Facebook who told me it looked like I was threatening a miniature Jabba the Hutt, it was him or me and he was delicious.

I moved up to Our Little Town in the summer of 1995.  Kim had been living here for two years at that point.  I was living in Iowa.  When we got engaged we knew that one of us would have to move, and since she had the actual job I ended up returning to the proper side of the Mississippi River, if only just.

It was a hot summer that year.  The temperatures before I left Iowa topped out at around 106, and they’d go back up to that not long after I moved here, but there was a short break during the actual move.  And if you know anything about short breaks like that, you know that all that did was make the weather more volatile.

I rented a truck and somehow convinced several of my grad school friends to help me take all of my worldly possessions out of my third-floor walkup apartment and stash them into the truck.  Then I made the journey to Our Little Town without changing the shape of anything on the interstate – a feat which to this day still amazes me.  Kim was hosting her Swedish friends, Mats and Sara, and all of us pitched in to get everything out of the truck and into the second-floor walkup apartment where Kim and I would live for the next year or so.

We just made it in before the rain started falling, and were still trying to shove things around when the tornado sirens went off.

They don’t have tornados in Sweden.  It took some convincing to get the Swedes off the balcony (“What the hjell are you doing!?!?  Get insjide!!”), where they were trying to see if they could spot the tornado.

The next day more of Kim’s friends, from northern Wisconsin came by – Fuzzy and Rachel and their young son Vaughn, and Phil (that’s Phil in the background).  One of them – or perhaps all of them – had made a stop on the way down.

If you ever find yourself in northwestern Wisconsin and you are looking for pie, you need to get to the Norske Nook.  There’s two of them now, but at that time there was only the one in Osseo – a town close enough to the interstate that it’s worth making the side journey.  The food is pretty good, but the pies are the key.  You can buy them by the slice, or they will sell you a whole one for carryout.  And when you swing through Osseo next time and bring them back their plate, they will refund your deposit.

That’s one of their meringue pies, though which one I don’t remember.  Probably lemon.  It was good.  They’re all good.
Posted by David at 10:13 PM