I spent a lot of my junior year at a women’s college.

No, I wasn’t enrolled as some kind of bizarre reverse affirmative action case, letting the straight white man take classes at the feminist bastion of Bryn Mawr College.  I had plenty of classes down at Penn to keep me occupied, and even if I didn’t I’m not sure how well that would have gone over there.  They weren’t too keen on the Haverford guys who roamed around the place, as I recall, and those guys had a written agreement that allowed them to be there.

Besides, even at that point of my life I understood somewhat of the privileges that my demographics bestowed upon me.  I was just happy to be there at all, and I tried to fit in as best I could.

Bea and I met at one of the medieval feasts that Julia used to hold every summer in West Hartford, and that fall we started dating.

I got to know the R5 Paoli Local schedule very well that year.  The last train left 30th Street at 12:19am, for when Bea wanted to get back to her dorm, and the last one arrived at 12:34am for those occasions where it was me who had something early to do the next day.  Either way I was on my own, walking through West Philadelphia in the wee hours.  You could do that then.  Nobody ever bothered me.

Bryn Mawr has any number of rituals, events, special occasions and festivals scattered throughout the academic year, and Bea and I managed to go to most of them - those where men were welcomed, anyway.  There were a few reserved just for the students.

The last event of the year was May Day, which was the first weekend in May – all holidays in the US having become moveable that way over the last half century or so.  I’m not really sure what the purpose of the day was, what precisely was being celebrated, but it was a festive occasion nonetheless, and nonstudents were welcome.

Bryn Mawr students were expected to wear white for the day.  I don’t know why.  Red would have been more politically appropriate for an event named May Day, green more springlike, but white was the order of the day.

But I wasn’t a student there.

So I thought about that for a while, and the end result was this: 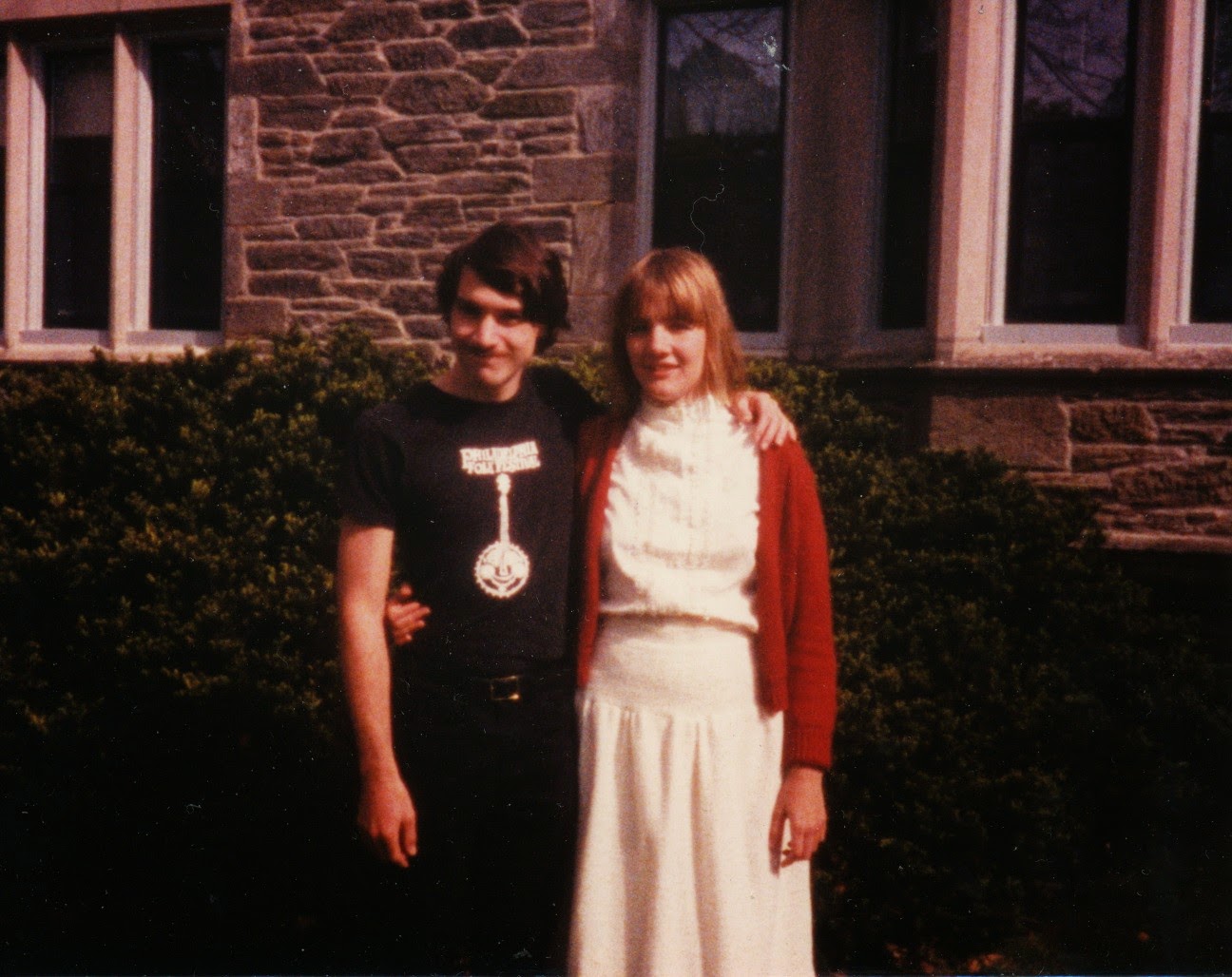 Bea was kind enough not to break up with me then and there, and the day went well.
Posted by David at 9:17 PM

Hi, I got some red on.
The maypole dance was supposed to be about fertility and, um, maleness. Then there was the mayhole dance. At least it didn't pour that year.

Part of me wonders what the Mayhole dance was like, and part of me is glad we skipped it.

We did skip it, right?

Oh, no, we didn't skip it. I dragged you to it. It was a bunch of women in a circle with a big piece of round cloth and confetti on it. They sang "Sisters can do it for themselves" and shook the cloth until the confetti jumped up and down.
You witnessed Bryn Mawr history. That was the first annual one, and they are still doing it!
Anyway, your reaction was a Spock-like raised eyebrow.

I can believe that was my reaction - to be honest, I'm having that reaction now - but I don't have any recollection of that event at all.

This from the guy responsible for shepherding three performances of The Vagina Monologues in the last five years.

I react in much the same way to that play, come to think of it. ;)