There is something about dinosaurs that attracts boys.

Maybe girls too, though not if my own children are any indication.  And maybe it was just the times – do kids these days even know about dinosaurs?  They must.  But for boys of my generation, dinosaurs were just the coolest things in the universe.

They were big.  They were strong.  They didn’t have to clean their rooms or go to school and they could eat anyone who said otherwise.

I remember having all sorts of dinosaur stuff when I was a kid.  The first thing was a brown hardback book about eight inches square that I still have somewhere.  My dad picked it up from the Museum of Natural History in New York City when he was up there on a business trip when I was about four or five – he walked over from the conference center, wandered into the building, and asked the security guard where the shop was.  He got there, bought the book, and it was only on his way back out that he realized that nobody had asked him for any money for entry.

We went back as a family not too long after that – my first trip to New York.  We took the train, which was exciting.  It was a foggy day, as I recall, so we didn’t get to see much from the top of the Empire State Building.  And I remember standing on a street corner while my parents looked at a map, trying to figure out how to get to our next destination, when a blustery lady came up – an old lady, I thought then, though probably not all that far from my own age now – and asked us where we were headed.  “I hate when people look at maps,” she said, and she sent us unerringly on our way.  Eventually we ended up at the Museum of Natural History to see the dinosaurs, and I came home with a cast-lead statue of a stegosaurus, maybe two inches from end to end.  I treasured that thing, even when the paint flaked away and the last quarter inch of the tail snapped off.  I still have that too.  It’s probably with the book.

Somewhere between those two New York experiences was the following: 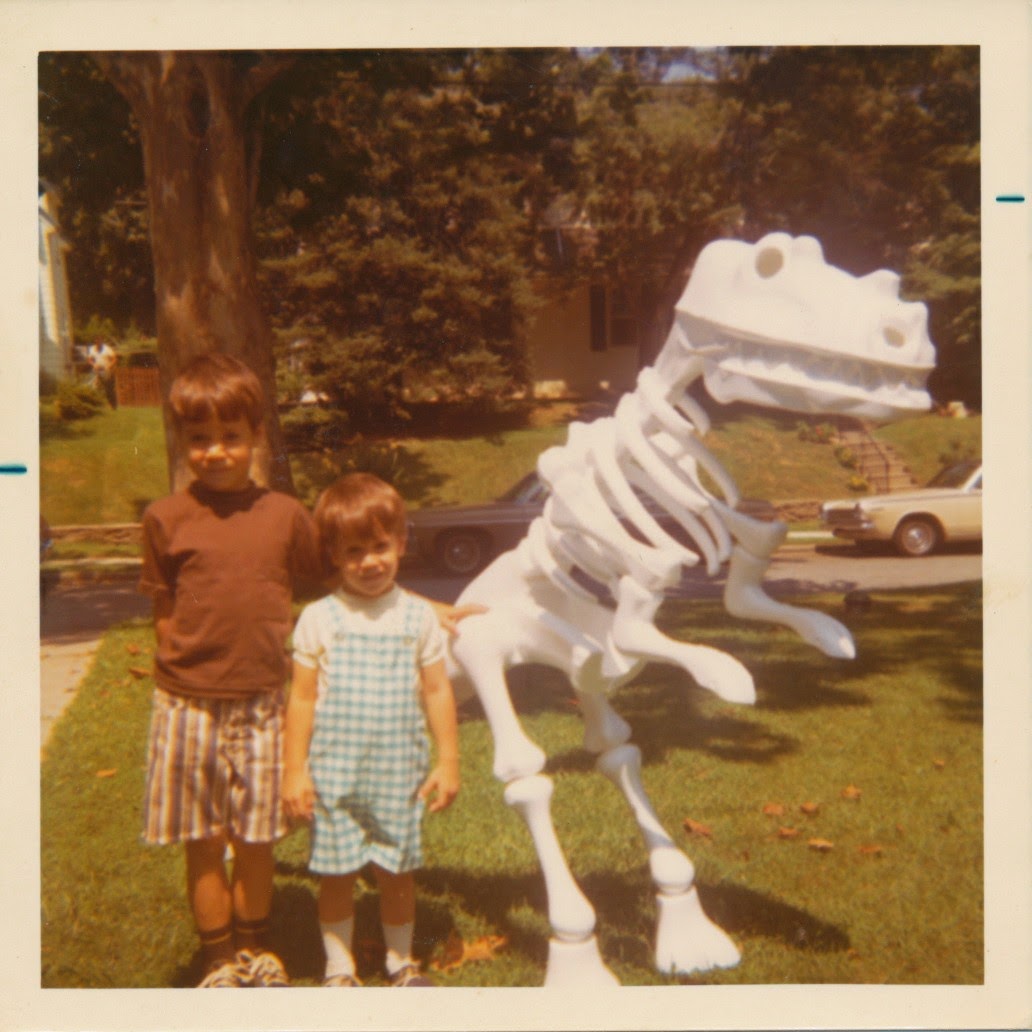 It’s about 1970 here, which makes me four and a half, and my brother just shy of two.  We’re out on the front lawn of our house, on the tiny one-block-long suburban street where we lived.  That’s our neighbor in the back left.

And that, on the right, is our dinosaur.

I have no idea where my dad found it, and at this remove neither does he.  It was styrofoam, and it came in pieces.  We had to put it together.  I think it was held together by rubber bands, or at least some of it was – the arms moved and so did the jaw.  Perhaps the rest of it was just tab-and-slot construction.  It didn’t weigh much, but it was big.  So my dad built it outside on the lawn, probably slowed down considerably by our efforts to help.

And there it sat.  We couldn’t really bring it inside, as it would take up the entire living room, so we left it there for as long as the weather held.  “We got some reactions from the neighbors,” is all my dad would say about that.  No doubt the other kids in the neighborhood – and there were a lot of them – came over and had fun with it too.  That’s what it was for, after all.

Eventually the weather turned and our dinosaur had to be taken apart and brought in.  I remember pieces of it floating around the house for a while, and then – like all good things – it went away.  It was long gone by the time we moved in 1979.
Posted by David at 4:58 PM

My grandsons are all fascinated by dinosaurs. They watch documentaries about dinosaurs and play with plastic dinosaurs. Jayden (4) saw The Fintstones for the first time today and he loved it. So I think we can say that dinos are still a big hit with young boys.