Survival of the Fastest

So it’s winter, here in Wisconsin.

The ground is covered with a thick layer of snow on top of a substantial layer of ice.  The temperatures are just barely in “real square root” territory, Fahrenheit (though this weekend the bottom will fall off the thermometer and there will be a prolonged period where this will no longer be true - it will be like living in Canada only with more guns and less health care).  There is a stiff breeze that makes the actual temperature sort of irrelevant and turns any exposed skin into leather.  The sun gets up about halfway into the sky before giving up in disgust and sloping off back down again to curl up in some dive bar and grumble about how long it is until spring.  Between the cloud cover, the snow, and the wan sort of daylight that bounces around between the two, everything has a slate blue cast to it. 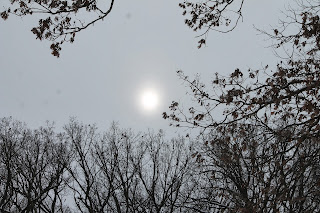 Naturally in such circumstances, the Wisconsinite heads outdoors.

This is, as Garrison Keillor once explained, why there are fewer idiots in the North than in the South.  It’s simple Darwinian logic at work.  Every year around the spring thaw we Northerners haul the bottom 4% of our intellectual firepower out from under the melting snowbanks where they have been since mid-January and bury them with due honors, thus removing them from the gene pool.  There is no equivalent mechanism in warmer areas of the US.

Winter: it's good for society.

So yesterday, as part of their training to stay in the top 96% of society (and, well, because it's fun), I took the girls and one of their friends over to Mel Allen Hill (“Ooooh!  That’s gotta hurt!”) for some sledding.

The hill was in fine shape, so long as you didn’t actually plan on climbing back up to the top without using your hands and knees, and the ride down was slick and fast.  Plus, adding to the Darwinian nature of the day, there were the usual handful of morons who insisted on trying to walk up the middle of the hill into the teeth of the folks sledding down.  Thins out the herd, don’t you know.

They had a great time. 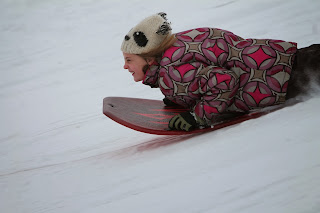 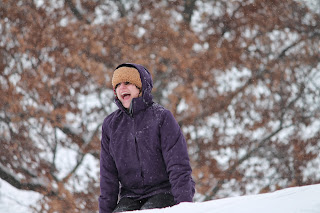 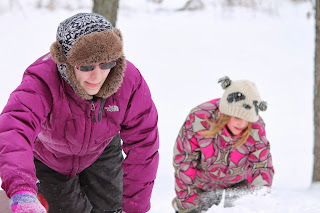 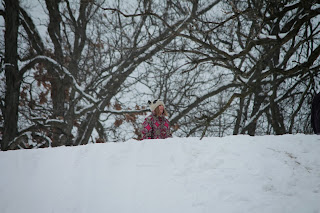 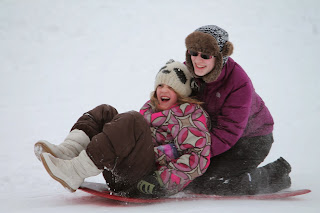 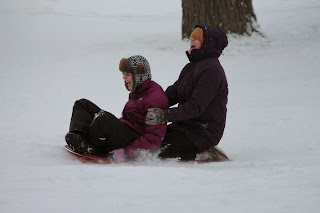 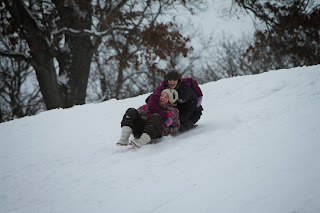 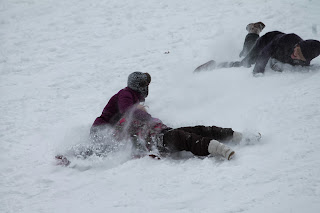 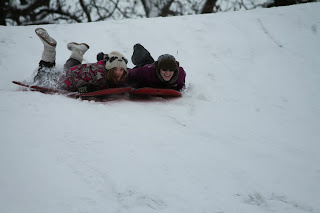 Afterward we came home and had hot cocoa, because that’s what the day’s winners of the winter Darwinian contests should have.
Posted by David at 4:54 PM

"Every year around the spring thaw we Northerners haul the bottom 4% of our intellectual firepower out from under the melting snowbanks where they have been since mid-January and bury them with due honors, thus removing them from the gene pool. There is no equivalent mechanism in warmer areas of the US."

I beg to differ. The mechanism is usually referred to by its battle cry: "Hey, y'all, watch this!".