All The Little Fishies

My parents traded in their two older cars this fall and got one new car with all sorts of space-age extra features.  There’s more computing power on the dashboard of this car than it took to get to the moon (which, granted, isn’t saying a whole lot, since – according to any number of grouchy editorial columnists who don’t hold with all this spending money on educational technology – the entire moon exploration program was calculated by engineers using an abacus, a #3 pencil, and a Big Chief notebook and that ought to be good enough for your children too), it has a heads-up display as if you were in a dogfight in the skies over Baghdad, and so on.  But the heated seats were the things that genuinely impressed those of us who had just driven in from Wisconsin, particularly as the weather got colder every day we were there.

She let us borrow the car while we were visiting, and we took it across the Delaware River to Camden.

Stop laughing!  Camden is more than just a run-down collection of punch lines these days!  It also has an aquarium.

We got there in the early afternoon, shortly after we should have had lunch.  Fortunately, right as you park your car there is a little food cart staffed by a guy in a floppy hot-dog-shaped hat and bearing a sign with the astounding – and quite accurate, it turns out – claim that his food is cheaper than what you will find inside the aquarium.  So we stopped and purchased several soft pretzels shaped like braids and as long as a Roman sword, as well as a few hot dogs for the non-pretzel-eating set.  And having properly doused the pretzels in mustard, the way God and Nature intended them to be eaten, we set off toward the aquarium proper.

It was a cousin-intensive field trip, with Josh and Sara joining us first, followed by Matthew and Aaron, along with everyone’s respective parents (and, in Rolane’s case, at least one grandparent).  It is amazing, as a parent, how often you get reduced to being simply an adjunct – a means of transportation – and how little that bothers you.

If you’ve never been to the Camden Aquarium, well, you should go.  There are a lot of things swimming about in vast acrylic-enclosed bodies of water that you can walk right up to and be fascinated by. 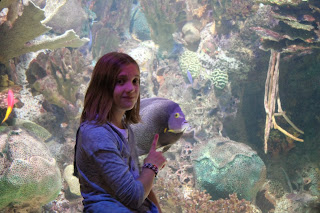 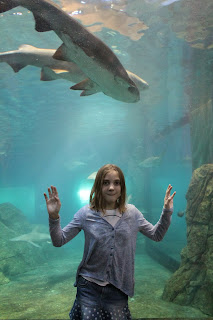 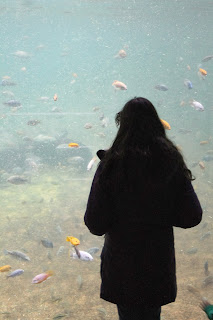 Some of which are not, strictly speaking, aquatic.  Although given current climate trends and the fragility of the Arctic ecosystem, perhaps that is only a matter of time. 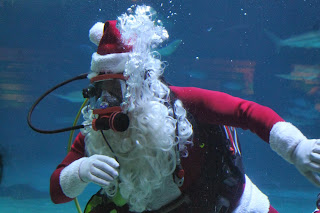 Plus there are any number of wide, shallow pools where they let you try to touch the critters swimming around inside. 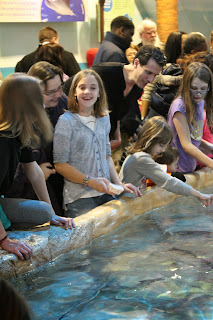 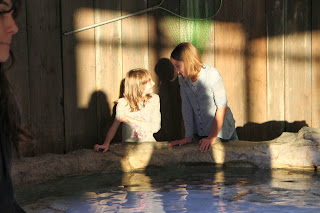 We spent a happy afternoon there, communing with the fish (and, for a while, with the two hippos that lumber around one of the bigger enclosures).  It was crowded, as you would expect such a place to be during the holidays when school is not in session, but there were all sorts of little nooks where you could get away from it all. 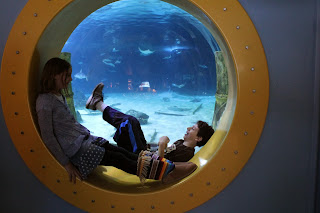 Every once in a while it is a good thing to go see some of the other creatures that inhabit this globe with us, just to remind yourself that there are such things.  It provides a bit of perspective that otherwise tends to get lost.

And there’s always the chance you can score a soft pretzel as big as a Roman sword along the way.

I absolutely LOVE aquariums. My current favorites are the Georgia Aquarium in Atlanta and the Newport Aquarium just over the border from Cincinnati.

When we travel, I always check to see if there is an aquarium nearby to visit.

Of course, we inevitably end up going out for seafood either before or after the aquarium visit, because there is apparently something seriously wrong with us.

Well, at least you wait until you're not on the premises any more, and you probably don't bring bait with you. That's a start.

I believe the Camden Aquarium does serve fish sticks at the snack bar, which raises a number of questions really.

Or fish that has been tinned and left to ferment for several years.

There is a fabulous seafood restaurant pretty much next door to the Newport Aquarium and we always go there. And there's a Legal Seafood just up the street from the Georgia Aquarium (I love their chowder)

And now I want seafood.

And living in a landlocked state, am unlikely to get any, any time soon.

Well, the most common word that I heard from Japanese school kids in the aquariums I visited when I lived there was not "sugoooooi", which is "cool" or "wow", but "oishiiiiii" which is "tastyyyyyyy!".

And we had little fishies on our vacation, too. They eat the callouses off your feet when you dip them in the pool they live in at the hot spring resort.

Yes, it is just as weird as it sounds.

Which part, John - the callous-eating fish or the hungry school kids? Or both, I suppose.

Speaking as someone for whom the adjective "tasty" does not apply to any form of seafood other than popcorn shrimp (and then, I suspect, mainly as a vector for cocktail sauce), the whole thing just mystifies me.