So tonight I went to a basketball game.

I’d never been to one of those before.  Ever.  Not in high school.  Not in college.  Not for any professional team at any level.  While this came as a shock to Kim, it had never struck me as anything I needed to correct, really.  As I’ve said before, any sport where teams routinely score a hundred points in increments of two is clearly irresponsible and can be dismissed out of hand.

But for this game, I had Powerful Incentive.

For tonight’s matchup between Local Businessman High School and their league rivals in the next town south of us, they invited the fifth-grade band members from most of the elementary schools that feed into LBHS – a category that includes Not Bad President Elementary – to join with the LBHS pep band.

Lauren has been practicing for weeks on her clarinet, honking away at Gary Glitter’s “Rock and Roll Part 2,” which everyone refers to as “The Hey! Song” because that makes a whole lot more sense than “Rock and Roll Part 2.”  Frankly it makes more sense than Gary Glitter in general, but there you go.  She’s also been rehearsing the “Let’s Go [TEAM]” song that everyone plays at these things, so it has been quite the peppy time around here.  She got to be pretty good at them, too.

I dropped her off at the appointed time so she could join the rehearsal before the game, and then I went back home to pick up Kim and Tabitha.  We returned to LBHS, paid our admission (only the performers get in free and “I’m with the band!” doesn’t cut it, even if you produced one of the band members out of your own flesh and blood, not that I am complaining or anything), and settled down in the bleachers to wait.

It was a long wait.

The JV squads were having their game when we got there.  It was midway through the third quarter and the two teams were apparently having a rather spirited back-and-forth contest, with a number of lead changes and some quite athletic plays, none of which made any sense at all to me.  “Why did they blow the whistle this time?” I’d ask, and Kim – who actually does understand this game – would answer that question with an explanation that might as well have been in Attic Greek for all the good it did me.  This went on for a while until it became clear that further questions weren’t helping anyone.  For example, “How is that a foul?  There’s no blood!” is apparently not an acceptable thing to say at a basketball game.

I think I’ll stick with hockey.

But eventually the game wound down, with the visitors pulling out what was no doubt a thrilling victory for those whose knowledge of the game extended to more than seeing which score was bigger.  As they did so the band filtered in and took their seats in the bleachers across the way.

And then they began to play. 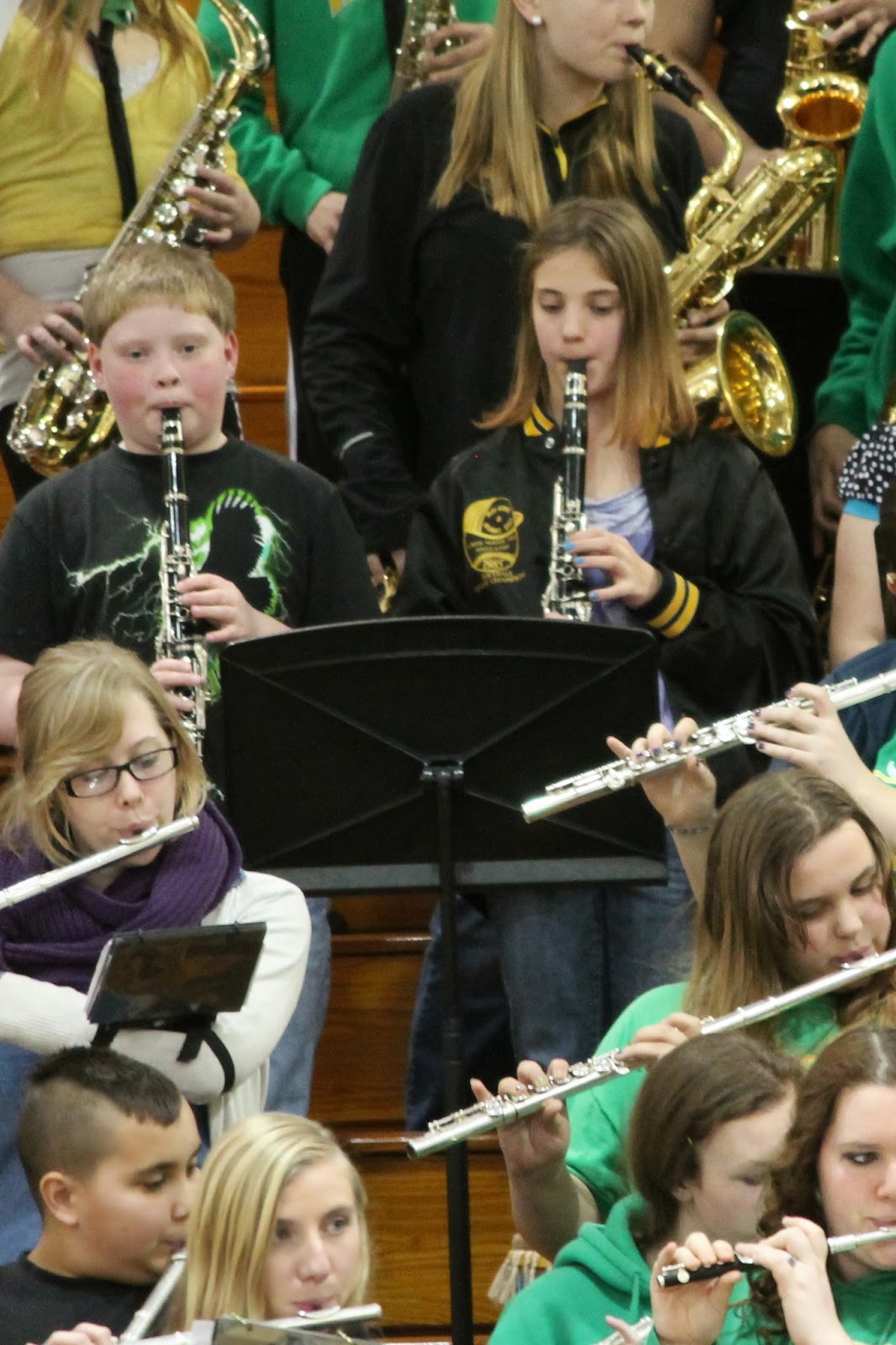 We had a grand time cheering along.  They played their songs quite a few times, each time getting the appropriate shout-out in response, and it was an energetic and happy evening.  And then suddenly it was time for the varsity teams to come out and commit further acts of basketball, so we left and got ice cream.  Because it’s January in Wisconsin and 11 degrees outside and we’re under a winter storm warning and that’s just what people here do under those conditions when there is celebrating to be done.