Waiting To Be Judged

There are retired Soviet apparatchiks who think that the judging process used by our County Fair is inefficient.

On the one hand, it’s all done by volunteers – many of them old enough to have known Vladimir Lenin personally – and it was well into the 90s today.  The fairgrounds are not air conditioned.  Even the curling sheets are melted away and used as floor space – trust me, we were standing on it for several hours.  It’s hot, unpaid work for them.  So you have to cut them a little bit of slack.

On the other hand, well, this fair has been going on for decades now and you’d think that they would have figured out a system by now that didn’t feel like a Depression-era breadline.

We showed up at 10am, right when the judging got going, and made a bee-line for the photography area.  This is because we remembered last year, when showing up in the middle of the afternoon had meant a wait measured in decades before finally getting to see a judge.  And sure enough, this year it went better.  We walked in, got a number, and ended up waiting about 45 minutes.  Given the judge-to-judged ratio, this wasn’t bad.

Then we went to the visual arts area.

I thought we were done when we got to the front of the first line, a process that required a fair bit of guesswork to determine which line to stand in and took a little under an hour.  But all that happened at that point was that the volunteer checked off the little boxes that said Lauren had indeed completed all three of her projects in this area – something we could have done by phone, really – and then sent us off to the visual arts building to wait in the next line.

There were five judging tables, each one calling numbers by color – we had scored “White 26” but there were also blue, green, yellow and red numbers.  They’d finish with one person in their series of colored tags and then call for the next.  This sounds fairly straightforward.

We were in a metal building with approximately three hundred other people – all of them talking – and no air conditioning.  We were surrounded with Fire-Department-quality fans, each of which would be fully capable of powering a light aircraft if needs arose.  Against this, none of the judges had any form of microphone or amplification by which to make themselves heard.  And there really didn’t seem to be anyone in charge who could organize any of it.

So, pack a lunch.

It was a long, hot process, but eventually we got through it.  Or, more accurately, Lauren got through it, since today was her day for projects to be judged.

She scored a blue ribbon and two red ribbons for her visual arts projects, which was pretty good considering that she started working on them on Tuesday and I was standing at the drug store buying super glue at 9:00 this morning so she could complete one of them.

We don’t know how she did on her “Five Photographs of One Inanimate Object” project – an assortment of pictures taken last month at the Liberty Bell that will be judged sometime this weekend without Lauren needing to be there for it – but she got a Top Blue for her “My Favorite Photograph” entry, which is quite good.

They give ribbons in categories at our County Fair – a blue ribbon is not The Blue Ribbon but is instead simply a marker that your entry is top notch in general.  But a Top Blue is something special.  That means you are in the running for a Merit Ribbon, or possibly being promoted to go to the State Fair next month.  Top Blues are quite nice to receive, in other words.

This is the photo that Lauren entered in that category. 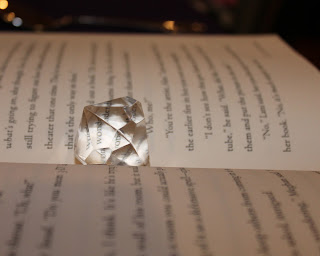 It was taken at a YWCA fundraiser dinner last September.  They had put those glass crystals in vases on the tables as centerpieces, and she thought they would look interesting in a book.  She has a good eye for an image.

On Monday we get to do it again, this time for projects for both Tabitha and Lauren – drawing, painting, woodworking.  It’s County Fair week here in Our Little Town, and the joint is jumping.
Posted by David at 8:05 PM