Today would have been my grandfather’s 101st birthday.

He spent most of his career as a civilian employee of the US Navy, starting as an apprentice machinist during the early years of the Depression and retiring as a spec writer forty years later.  He once told me that this last position was basically an exercise in creative writing where part of his job was to ensure that the contractor they wanted to provide the material was the only one who could fit the guidelines.  This probably explains a lot about the Defense Department. 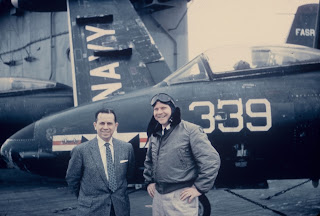 This photo was taken on the USS Randolph (CV-15), probably somewhere in the middle of the Atlantic.  The Randolph was an old WWII carrier, mothballed after the war and then refitted in 1955 to have an angled flight deck (among other things).  She went on a shakedown cruise off the US east coast in early 1956 and continued on active service until 1969.  Most of the warplanes in the other pictures are straight-wing or swept-wing jets, though some are propeller-driven and there is at least one photo of what might be a delta-wing aircraft.  In another picture you can see that the Randolph is being escorted by the USS Lewis Hancock (DD-675) which was decommissioned in 1957, so I'm guessing that this photo dates to early 1956, during the shakedown cruise.  That makes him younger in this photo than I am today.

My grandfather was there because they had just redone the catapults and he was the resident expert on the manufacturing and materials used in that process.  He'd written the specs, after all.  If you’re confused about which one is him just remember that spec writers rarely wear flight jackets.

He treasured this trip.  I heard about it more than once as I was growing up.

There are always stories left behind, when the people who lived them are no longer here.  That’s how you remember.  I'd never seen this photo until a week ago, but I remember the stories, and I remember my grandfather.

Happy Birthday, Pop.
Posted by David at 8:30 AM

Thank you for remembering Pop's birthday. He was a super dad and an enthusiastic granddad, a lover of corny jokes and a teller (and reteller) of stories from the past, all told between his beloved golf rounds. I miss him still. Thanks, Mom