A Small Child of the Last Century

I should have spent this week getting my classes ready for the fall, but I just couldn’t do it.  So I spent most of it digging into the family photo bins that have been sitting in my house for the last few years, trying to finish up the scanning project.

I’m about a third of the way through the last bin now, though this one will take a while since all that are left are five or six old photo albums and scrapbooks where the pictures have been glued down.  I’m not sure how I’m going to handle those, but procrastination always provides motivation to solve unrelated problems and since this project has nothing to do with next fall’s classes I’m sure I will be able to devote my full attention to it.

So far, this is the oldest photo I’ve found, and it is one of the few that someone actually thought to date.  Summer, 1907. 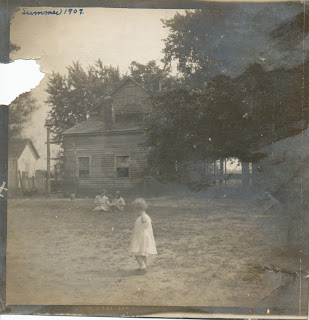 The child in the foreground looks like she’s about two, which would be how old my grandmother was that summer so I figure that was her.

She grew up in Philadelphia at a time when there were still dirt roads and farms within the city limits.  It’s entirely possible that this picture was taken at her home, though I don’t know the family history that well.  Nobody really does on my dad’s side of the family – there never were that many people I knew on that side, and only my dad is left now.

If that’s my grandmother, then the woman seated on the left in the background may well be her mother.  She did have a sister, though I have no idea if the girl in the background is her.  The animal to the left is either a small dog or a large chicken – either is possible, since the bell on the left side of the house and the open fields behind it suggest that this is a fairly rural space.

I never knew my grandmother as anything other than an old woman – she was sixty when I was born, and nearly seventy when she came to live with us.  Her hair turned white when she was young, so she always looked older than she was.

But here she is, a small child playing in the dirt, the way small children do.

I rather like the thought that this is her, and so I shall stick with that story.

You could try the census records to see how many people were living there, of what ages and genders and names.

I have an Ancestry.com membership if you want to provide a name and a place.

I say a chicken.