Another Decade In the Making

It is amazing how quickly a decade can fly by when you’re busy.

I never understood that until I had kids.  When you’re younger time moves so slowly that you think it will never pass at all.  You wake up on Monday morning, spend three weeks in school, and the calendar insists that it’s not even lunch yet.  Decades?  Might as well be millennia.

But then you have children of your own, and they are never the same from one moment to another.  They start out small and squally, and suddenly they’re up and running around with agendas of their own, and then just as suddenly they’re actual people with whom you can have actual conversations that don’t revolve around keeping them from sticking kitchen utensils into outlets, trash cans, or the cat, and you have no recollection at all of the intervening stages other than the logical certainty that there must have been some of them.

How does that happen?

Lauren turned ten today.  She is now officially a double-digit girl, into her second decade on this planet and waiting for it to turn into exactly what she feels it ought to be.  She’s been looking forward to this since, oh, early November of last year.  Lauren is not one to stand on the moment – she looks forward, relentlessly forward.

Lauren’s birthday is a huge thing for her, much more so than our own birthdays are to the rest of us in the family.  I’ve forgotten my own birthday more times than I’ve remembered it over the last thirty years or so - and likely would continue to forget it except that every year now it appears in my Facebook feed and people kindly write things on my page when it does - but for Lauren her birthday is the best and most important day of the year.  We’ve been getting reminders of this day for weeks.  She wrote it on the calendar.  The first thing she did when I woke her up for school this morning was flash ten fingers at me, to let me know how old she was now.  It’s a pretty big deal.

The fact that it’s Halloween is just extra.

Kim and the girls carved their pumpkins last night while I was teaching my night class, so I didn’t get to see them until today.  They were impressive, really. 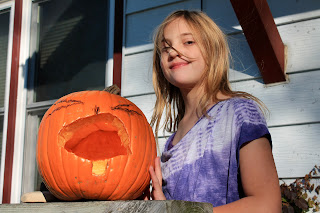 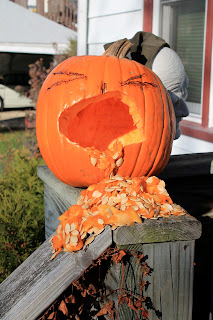 Lauren’s friend Claire came over after school to go trick-or-treating in our neighborhood this year, and after dinner they all got into their costumes. 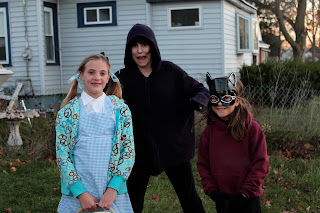 It was a brisk night, clear and pleasant, and we went from house to house gathering up treats of varying descriptions.  Not many houses had their porch lights on this year for some reason, but enough did that the girls all made a good haul.

And then, after I returned from taking Claire home, the UPS man came by with Lauren’s birthday presents from us, which Kim had actually remembered to order (versus my track record, which often leads to birthday presents given in entirely different seasons). 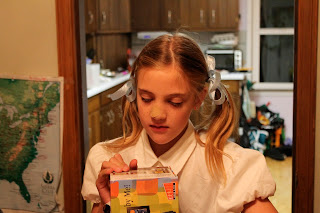 We’re having her birthday party this weekend, but that’s no reason not to be happy now.

Birthdays are IMPORTANT! Even as a grown-up! After all, when else can you go to a restaurant and get FREE DESSERT?!

Happy (belated) Birthday Lauren! I hope you had awesome dessert!

Michelle - she had Halloween candy. That counts, doesn't it?

Dr. Phil - oddly enough, that wouldn't appeal to Lauren. She spent much of last night sadly complaining that because she was now in double digits she was now officially on her way to being OLD, which in her mind translates as BORING. Oh well.

We spent Halloween wondering if we would get power back. We didn't, and no one went Trick or Treating 'neath the darkened streetlamps.

My girl will be 10 this month. But that doesn't make me feel as old as the fact that she started middle school in September. And the fact that there is now an academic subject about which she knows significantly more than I do.

We're all getting old, John. Now I understand what my mother meant when I told her, in college, that I was taking a class on "The History of the 1960s." "The 60s!" she gasped. "Those were my glory years!"