Is it even possible to listen to ABBA and not sing along?

The correct answer to that question is “no,” by the way.   Nor is it really possible to listen to “Dancing Queen” without doing the piano motions with your hands, even in heavy interstate traffic.  ABBA is the fourth-largest cause of minor traffic accidents in the US that way.

Tonight was the great ABBA Sing-In, down at the performing arts center here in Our Little Town.  It was kind of like a Messiah sing-in, only with sequins and spandex.  Not on me, personally – there isn’t enough whiskey in the barrel for me to stuff myself into anything spandex, not even as a negative example – but for others in attendance, it was the uniform.

It was a fundraiser for someone – I’m not sure who, really, but I suppose that is less important than the fact that about a hundred people turned out for what was in all likelihood a good cause and sang along.  They showed the movie version of Mamma Mia, set the DVD player to show the song lyrics on the big screen on stage (though where was the bouncing meatball to show us what words we were on?) and let us have at it.

It was a lot of fun.

For those of you who haven’t seen it or the musical on which it is based, the movie is a charming little story of a bride and three men she’s invited to her wedding, one of whom is her father though which one nobody – least of all the mother of the bride – knows.  Complications ensue, as you would expect, and the ending is suitably, if somewhat unconventionally, happy, as you know it will be, grim endings not being a hallmark of musical theater.  I suppose the plot isn’t all that important, really – mostly it’s an excuse to string together any number of ABBA songs into what is, by the standards of musical theater, a surprisingly coherent narrative.  But tonight it stuck with me.

The thing about ABBA songs is that when you’re singing along in the car you tend to focus on the bubblegum pop aspects of the songs – the catchy little hooks, the tight harmonies, the danceable rhythms, and so on.  Those are fun, but you can’t really build a story around things like that.  You can’t have a real story with just cheerful stuff.  The only reason the story works as well as it does is that there is a surprisingly dark edge to a lot of those songs.

Have you ever really listened to “The Winner Takes It All”?  It’s a very bitter song, in a sad and resigned sort of way.

The story of the movie is, of course, the wedding.  It’s all about the wedding.  Everything circles around the wedding, leads up to the wedding, follows logically from the wedding.  And at some point Meryl Streep – who really can sing, oddly enough, as anyone who has listened to the Philadelphia Chickens CD can tell you – gets lost in the moment and ends up singing one of ABBA’s less-well-known songs.

Schoolbag in hand, she leaves home in the early morning
Waving goodbye, with an absent-minded smile
I watch her go with a surge of that well-known sadness
And I have to sit down for a while.
The feeling that I’m losing her forever
And without really entering her world
I’m glad whenever I can share her laughter
That funny little girl

I was sitting next to Tabitha during the show, and part of me wanted to lean over and say, “You wonder why I take so many pictures?  That’s why.  You won't understand that for a long time, not really, but now you know.”

And I get to sing along. 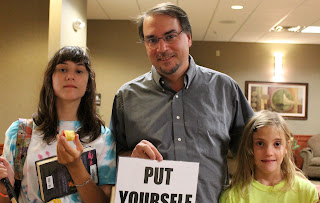 I just know that when Tabitha and Lauren get married, I am going to be such a wreck.

You now officially owe me 1 1/2 hours of my life very recently lost on youtube.

ABBA: There is no antidote.

Oh, come now - you can't tell me you're not enjoying cruising down the interstates with ABBA blasting out of the speakers, can you? I've done you a service!

Good to see you around here again, Lucy. :)

IIRC, "The Winner Takes it All" is about the divorce of two of the group.

Good lord. You really ARE me.

ABBA is the best band of all time. I unapologetically worship them, then and now. I've about worn out my Mama Mia DVD, too.

And yeah. I can't listen to Dancing Queen without playing air piano.

If you had to choose, what would be your favorite song?

Diana - It's hard to pick just one, isn't it? Dancing Queen is right up there, of course. Waterloo. Take a Chance on Me.

The darker side of me does like The Winner Takes It All, though.

My favorite--whatever it may be in the end--would probably have to come from either Super Trooper or The Visitors. Their music went from light and happy to more introspective and somewhat politically involved, over time. It matured, in other words. I think they broke up as a group (never officially, though) just as it was getting really good.