Well, I hope you have had a happy National Chemistry Week, out there wherever you are.

Nerd holidays are just the best of the minor holidays.  You can keep President’s Day, which has degenerated into an excuse to sell things to people who didn’t get what they wanted on Valentine’s Day.  Columbus Day just gets people angry these days, either because of the consequences of the European discovery of the western hemisphere or because of the modern reaction to those consequences – my liberal and conservative friends spent the whole day this year making snotty Facebook posts at each other, which takes a bit of the shine off for those of us who just want to be happy for a man who had no idea where he was going, no idea what he found, never did figure out where he’d been, and still managed to get a holiday named after him.  And Arbor Day?  Don’t make me laugh.

But National Chemistry Week is a time for people to join together and celebrate science in all its glory, and the fact that there are just way too many people in this country who think that’s controversial is just not going to make my world all wilty.

And there are just so many ways to celebrate!

Tuesday, for example – 10/23 – was National Mole Day, which I believe is mostly to do with Avogadro’s Number and nothing to do with rodents, although I’m not really sure about that, come to think of it.  My chemistry education was somewhat abbreviated.  The last time I actually sat in a chemistry class was sometime during Reagan’s first term in office and mostly what I remember from that class is that there is no recognized unit of measurement known as “yeah, about that much.”  This came as rather a shock to me and my lab partner, and is probably the reason my teacher retired not long afterward.  You can only dodge those bullets for so long.

I'm not really sure what one does to celebrate National Mole Day, either.  Count really high?  Apparently a mole of sugar is about 342 grams, which works out to quite a few candy bars.  Gluttony is always an option when it comes to holidays, so perhaps that would do.

Fortunately this idea did not occur to me at the time.

National Chemistry Week is a big sort of deal for Kim, her being a chemist and all, so this year she decided that since she was no longer chained to an administrative post and was actually back in a classroom teaching chemistry she would celebrate it in style.

So last weekend I saw few unusual items on the shopping list as I ran around the grocery store.  Those translated into Kim, Tabitha and Lauren spending most of Sunday baking cupcakes.  Mounds of cupcakes.  Gallons, quarts and pints of cupcakes, all of which ended up in the freezer until last night.

I teach on Thursday nights this semester, so I missed last night's Great Frosting Party.  Apparently if you mix those supermarket tubs of frosting half and half with Cool Whip you can cover an entire house with a fine layer of sugar, thus ensuring that the cupcakes - being part of the house at the time - will be covered as well.  Who knew?  And once that detail has been taken care of, you can then write the symbols and numbers of all of the elements on the cupcakes in a different color of frosting, one cupcake per element.  And then you can arrange them all into a periodic table.

A periodic table of cupcakes!

Bow down before our nerdosity, peasants!

Of course, this doesn't mean much sitting on the dining room table - you have to get it to the proper audience, and the logistics of that get tricky.  There’s about 120 elements or so, depending on how many you want to count.  They’re arranged in a sort of a grid, 18 wide and 7 high, plus 2 more rows underneath.  Each cupcake is about 2.5 inches in diameter.  Put them all into boxes, cart them to campus without crushing any of them or coating the inside of the car with the same fine layer of sugar currently coating the house, get them out of the car and into the classroom where you previously have remembered to ask Maintenance to find a table (yes, you have!) and … well, that’s some logistics right there.

Lauren was off school today thanks to teacher conferences, so she came in to help. 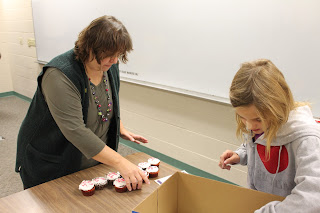 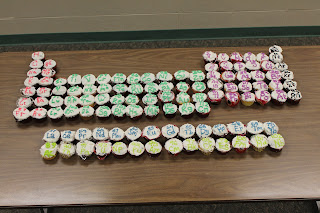 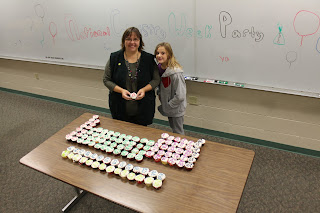 And at least they didn't celebrate Chemistry Week with the time hjonored chemist's tradition of taking out a wall with an explosion. o.O

And I think Columbus was more a modern day conservative than liberal - he fudged the known (and nearly correct)circumference of the Earth deduced by Eratosthenes down to a smaller valus so Isabella would fund his crazy venture going across the ocean the wrong way. If North America hadn't been in his way, he'd have died of thirst or hunger.

Actually, I knew it was about families of elements rather than each element - I just wrote that section too imprecisely. I know more than I let on!

Which, granted, isn't saying much.

I like Columbus because he is the best example of why you should never underestimate someone who has no real idea what they're trying to do, because they may surprise you.

Shaving numbers in order to secure funding seems to me a bipartisan failing, though.

I like the idea of your house covered in icing sugar. Though if you come home to find the porch roof supported by candy canes, and the cladding replaced with gingerbread, it's time to worry.

I love the idea of a periodic table of cupcakes!

I hope they didn't forget Hu. That's the human element. It should be centered at the top between H and He. It's the element that makes all the other elements meaningful.

The students in your wife's class are so lucky to have a teacher like her--what an awesome undertaking! Happy chem students, indeed.

Hi Lorraine - yes, indeed, they are lucky to have her. She's a great teacher. Thanks!

Tom - my favorite extra is Ah - the element of surprise. :)

Julia - I'll only begin to worry when two little kids show up and start pushing me toward my oven.

I LOVE this. Well done. Kitchen chemistry -- baking -- that you can eat to learn about lab chemistry....

Had I had a teacher like this, I might have taken chemistry. Don't know an acid from a base. Daughter of a doctor and a chemist, sister of a chemist, my idea of science is "cough" political science.

If I didn't see the physical family ressemblances, I'd think I had been adopted.