Soaring Through the Afternoon

Lauren and I spent much of the afternoon making paper airplanes.

It was a hot enough day that not even the mad dogs or Englishmen were out and I had left the work I planned to do on my desk on campus, so it was a bit of found time for the two of us. I refuse on principle to use found time for productive purposes – I regard such time as a gift to be used for better things – so airplanes it was.

Lauren wanted to see how many types of airplanes I could make. It turned out that there were five. 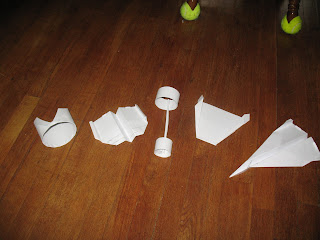 From left to right:

1. The one that looks kind of like a bishop’s mitre.
2. The snub-nosed little acrobatic thing that looks batlike to me.
3. The rod-and-tube thing that I always thought was cheating since it requires tape and scissors to make. Real paper airplanes require only paper and time.
4. The flying wing.
5. And the normal everyday dart.

Lauren also made her own copies, which were far more colorful, and when we went back to campus to fetch Tabitha she threw them around the big atrium on campus until one got stuck in the ivy planter that stretches from floor to ceiling. That was enough for that.

I’ve always loved paper airplanes. They were the one of the main reasons I went to church as a kid.

The church I went to was an odd building. There was the church proper – a small but neat space with watery Protestant stained-glass windows – and, linked to it by a hallway, was the Parish Hall. The Parish Hall was probably bigger than the church proper and shaped approximately like it. It was a long space with a sloping roof that rose to a peak about two and a half stories above us, and other than some storage at the far end it was essentially empty. The grown-ups would gather at the near end to drink their coffee, which meant that most of the room was ours.

Every Sunday they would print up dozens of bulletins for the service – blue ink on light-blue paper – and once the service was over they all belonged to us kids. Bobby and I were the resident airplane experts – we’d crank out a dozen or so every week and pass them out to all the kids, keeping the best for ourselves and honing our craft with each passing Sunday, until by the time we all left after high school we were paper airplane savants.

The whole far end of the Parish Hall would come alive with swooping blue airplanes from the moment we got out to the moment our parents would drag us off home. And so long as we kept them away from the grown-ups and out of their coffee, they were content to let us do it.

Sometimes I think I should start going to church again, if only to pass on paper airplane lore.

You have to put your faith in something.
Posted by David at 10:10 PM

I found this post very uplifting. The image of paper airplanes flying around in a church is a great one, and I think you ought to go to church again just for that reason...only I'd like to see the adults indulging this time.

I think the adults might indulge now. It's a less formal age and a less formal place than when and where I was a kid in church. I would certainly have a grand time.

Does the rod-and-tube thing really fly?

It does, but it's a very tricky design to do right - you have to line up the tubes with the rod and each other fairly precisely, otherwise it just veers off and crashes. It won't work very well if they're even a bit out of line with each other. But if you can get it right, it soars.