A Day at the Park

When Lauren is an inch taller, she is going to OWN Six Flags Great America. 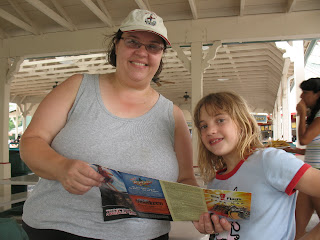 Yesterday was our annual trip to Six Flags, courtesy of a) the Not Bad President Elementary reading program, which gives to each student who completes it a free ticket, and b) the Coca Cola company, whose reward point program can also be cashed in toward tickets. With all of the various incentive programs and special deals, they practically had to pay us to go to their park.

Of course they made it all back in parking and food, but there you go.

It was a hot day – nearly 50 degrees warmer than the first time we went, back in 2009, which relieved us of the oddity of shivering into our hot cocoas in the middle of summer. Instead, we got to sweat in the sunshine. It was hot enough that we made very good use of the free refills on our Souvenir Cups – we nearly got our money’s worth out of them, in fact – and the caps we brought with us were unmanageable and soon stowed in the backpack, fashion be damned. 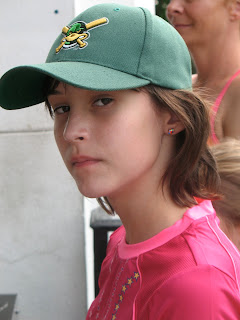 Oddly enough, though, the net effect on the crowd was about the same as when you could see your breath. The lines were manageable and we got to go on many, many rides, which was the purpose after all.

There were several different variations on the Scrambler, for example. 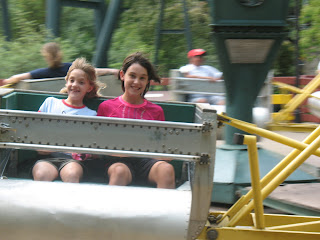 And there was the space needle thingy that takes you up into the stratosphere and drops you back down to earth in less time than it takes for your spouse to take out an insurance policy on your foolish self. 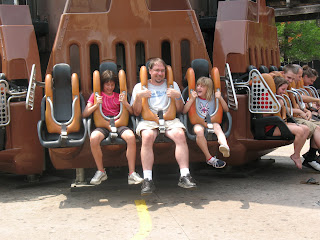 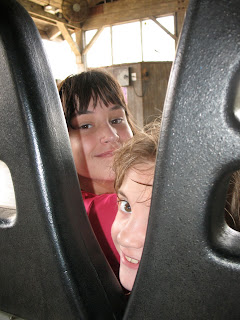 The first stop was the Superman coaster, which hoists you into a prone position – the better to shower the floor beneath you with loose change, a physical manifestation of the park’s philosophy in general, really – and then scoots you off for several loops and a corkscrew before returning you to vertical at the end. Tabitha and I rode that one – Kim refuses to do anything that clearly contrary to self-preservation, and Lauren is, as mentioned, too short.

This rankled Lauren no end, as she has no fear of anything that is brightly colored and in the open air, and though we tried to substitute for the experience by going on every eligible coaster in the park, including the looping and corkscrewing ones, often multiple times, it wasn't the same. Next year, though, next year.

She made up for it by embracing pretty much every cartoon character we passed. 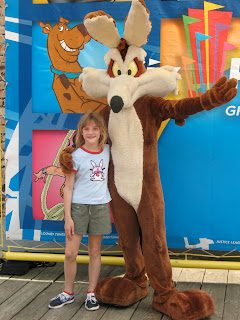 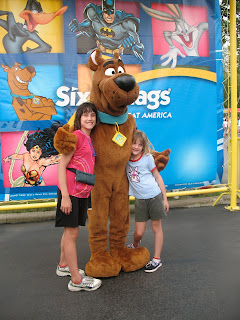 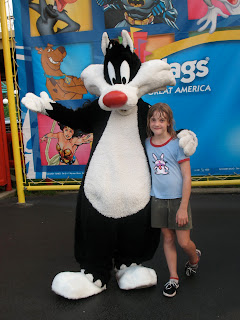 You really had to feel for those poor guys. It was a hot enough day that you felt sort of obligated to make it worth their while to be there by posing with them.

And there were water rides. 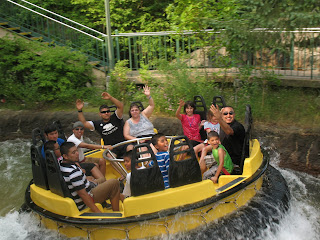 I’m not much of a water ride person, for the simple reason that I do not like wearing wet clothing. I managed to stay landbound for the Raging Raft Of Death, but eventually parental duty called and they got me on the flume ride and something called a Buccaneer Battle, which at least had the merit of providing you with a water cannon so you could fight back.

My children are roller coaster junkies. Life is good.
Posted by David at 5:40 PM

I was at one of these places (in Toronto, I think?) where the "water canon" shot pre-made water balloons. Good, clean, violent, hi-tech fun!

I'd sign up for that in a heartbeat, wet clothes or no.