It’s the end of July and around this part of Baja Canada that can only mean one thing: County Fair time!

We’ve been a bit more involved in the fair than usual this year. Most years we’ve just been part of the unthinking herd that shows up when the music starts playing, goes on the various rides, visits the livestock barns and eats food that only exists at county fairs – either fried or on a stick or, if you do it right, both. We’re all that still, but this year we’re also 4H members, which means the girls get to be part of the show.

Tabitha entered three different art categories as an exhibitor and spent a good chunk of the month working on a colored pencil drawing, a watercolor and a mixed media artwork, all of which were finished with literally hours to spare before we had to head over to the judging. She marched up to the judge with her artwork and they had what seemed from a distance to be a perfectly pleasant conversation, after which she came over to us with two blue ribbons and a red one. 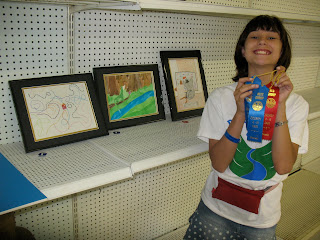 Blue ribbons at our County Fair are not like they were in Charlotte’s Web, where there’s only one given out per category. They’re more like A’s in college classes. You have to work hard and do a great job to get one, but they’re available to anyone willing to make that bargain. We were suitably proud of her for her ribbons.

That was Monday. On Tuesday it was Lauren’s turn.

As a Cloverbud, which is what they call the junior 4H’ers, she was only eligible to do one project, for which she would receive a participation ribbon (a nice rainbow-colored one, it turned out). Lauren chose to do no-bake cookies, in particular the Swedish Chocolate Balls that I posted the recipe for here a few weeks ago. In recognition of the fact that these things had to sit out in the hot July weather for a while, we took the suggestion of several commenters and omitted the eggs from the recipe. Other than being a bit denser there really wasn’t much difference, and we’ll probably go with the eggless recipe from now on. In any event, Lauren enjoyed making them (she’s got the “meatball motion” down pat – next step is to get her making gravy) and the judges enjoyed tasting them. 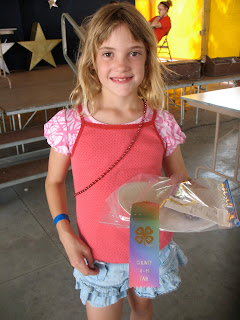 Wednesday was Wristband Day, when any member of the rabble can purchase – for a slightly more than nominal fee – a wristband entitling them to unlimited rounds on the midway rides. And even on a grey and rainy day the girls and their friend Grace still got their money’s worth out of it. 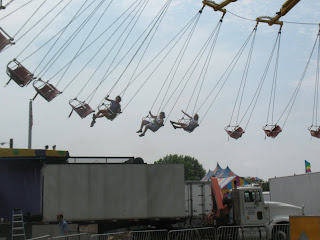 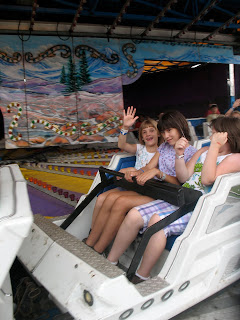 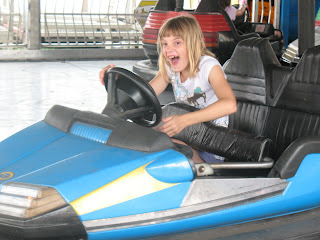 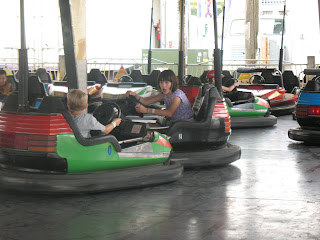 Lauren is by far the most adventurous of the bunch, despite being the youngest and smallest. It was Lauren who continually pushed to go on the Firestorm, for example – a vertical rollercoaster that just goes around in one big circle, forwards and backwards, hanging at the top during the changeovers. She just LOVED that ride. Grace tried once and vowed never again. Tabitha was more efficient than Grace at reaching the same conclusion. You have to have a partner on this ride, though. One time we convinced a passing mom to go on (I didn’t have a wristband, otherwise I’d have gone), and eventually Lauren connected with her friend Bailey – whose family was showing Belted Galloways over at the cattle barn – and convinced her to join.

The odd thing for me was that the girls are now old enough that I don’t really have to follow them around anymore – I can just set up shop on a bench somewhere and tell them to meet me there in an hour or two or three. The girls, of course, found this entrancing – Independence! Yes! – but for me it’s just odd.

We beat a hasty retreat when the thunderstorm rolled across southern Wisconsin at the end of the day, but it was a good day anyway.
Posted by David at 2:13 PM

That looked like a lot of fun. I will be doing our county fair tomorrow with grandchildren who have entered various craft items, and where it's also kids day (free entry to the fair) and wristband day (unlimited rides from 11 am to 6 pm for an also slightly more than nominal fee.)

It's quite an experience, isn't it? Growing up in and around Philadelphia I never went to one of these fairs until I got to Wisconsin. They're a lot of fun, I've found.

Have a good time with your grandchildren!

The independence thing is weird. Shahyn will be turning seven this fall and I'm just getting used to the idea that one doesn't have to keep an eye on him constantly. A noise every from his neck of the house every now and then reassures us.

Gonna be a long few years coming up.