The household gods are ironical beasts.

Last week I managed to replace the filter on the water line to the fridge without flooding the basement or injuring myself or others, a feat which amazed pretty much everyone here including Lauren, who is old enough to have figured out certain things about her old man, notably that he has a defective household repair gene and should not be allowed to wield any tool sharper than a ballpoint pen. I don’t think that replacing the filter actually solved the problem that we were having with the water, but even so – we now have a new filter and still have a dry basement. And there was no blood.

But these victories are never very long-lasting, and retribution is always swift.

On Sunday we had much of Kim’s side of the family over for the annual 4th of July cookout. There were vast quantities of good food and conversation and the various children managed to have a good time without burning anything down, and at the end of the day there were fireworks. I’m not sure why Our Little Town insists on shooting them off so that they arc gracefully over the cardiac care wing of the local hospital before detonating, but it’s within easy walking distance of our house so I don’t complain.

Shortly before we left to go see the fireworks, though, Kim filled the sink full of water in an effort to loosen our “map of the continental US” jello mold (which worked, by the way, although Tabitha did report that on the trip out to the picnic table Maine seceded and had to be consumed – poor Maine). And when she unplugged the sink – whooooosh! Suddenly our kitchen floor was full of water.

The culprit was this hole: 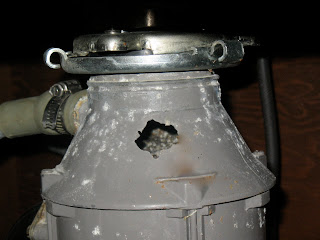 Two things about this hole – first, it wasn’t there an hour earlier when I was doing the dishes. And second, that’s the garbage disposal, which at that point in its structure is made of eighth-inch thick steel. We found no shrapnel when we cleaned out the cabinet, either.

I’m guessing metal fatigue, but really – it might well have been the cats' laser eyes for all I know.

Of course the cats have laser eyes. They're pretty much standard on cats these days.

So today I went over to the local Home Project Emporium and bought a new garbage disposal, one that fit the strict criteria I laid out for it in that it looked very much like the old one and therefore the odds were good that all the fiddly bits would be in approximately the same places and require less fiddling therefore.

So I spent an afternoon undoing the old one and putting the new one in. There were quite a few puzzled looks, a few blatant misuses of tools (you can do anything with a hammer if you’re clever enough), and a few explorations of the more interesting side of the English language which grew more intense when the following occurred: 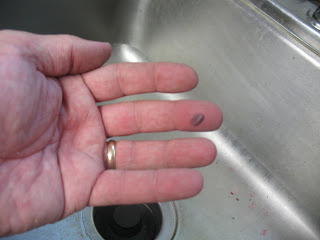 But in the end the new one is now sitting in the space formerly occupied by the old one and it works. There was blood but only mine, and the house is still standing.

It’s not as clear-cut a victory as the last one, but I’ll take it. 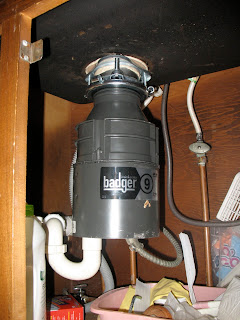 I'm impressed. Usually, the only handy stuff Issam and I do is to change our lightbulbs... together.

In the bedroom, we're in the dark now. Literally. The new light fixture doesn't work and we can't find an affordable electrician on Bastille Day week.

Yea, that's not one of the better things to replace. I had to take apart the entire sink. Even more fun. Gouges of flesh missing. Fun.