We spent today down at the Thresheree again, as we tend to do over the Labor Day weekend.

There is just no way to explain the Thresheree that does it any justice. Wisconsin is full of things like that, as anyone who has ever experienced the monument to the importance of taking one’s meds that is The House On The Rock can attest, but that doesn’t make it any fairer to the event. I tried my best to provide such an explanation last year in this space, but even so, I’m not sure I succeeded. You’ll just have to take my word for it.

We got there around noon, because this is a holiday weekend and the crack of noon is about as early as is decent to be up and moving around. Unfortunately there are a lot of indecent people in this world, and so we had to park somewhere that was only marginally closer than if we had simply left the car in our own driveway. Fortunately the Thresheree folks plan for this and provide tractor-driven shuttles to take you to the main event.

This year we took the long way around once we got inside as well, which led us into areas of the festival we seldom see, such as the rows and rows of tractors parked wheel to wheel for as far as the human mind can conceive. Red ones, green ones, yellow ones and orange ones, each with their fierce partisans, mixed in with the occasional grey or black ones that predate most of that furor.

I grew up in a tractor-deficient area so most of that is rather beyond me, but I have to confess I have developed a sneaking fondness for the old-timers – the real old-timers, the ones that are mostly wrought iron and steam, the ones that burn wood, the ones that have chains for steering and whose front wheels therefore tend to judder and shake like recovering alcoholics, the ones that are the size and shape of railroad locomotives. 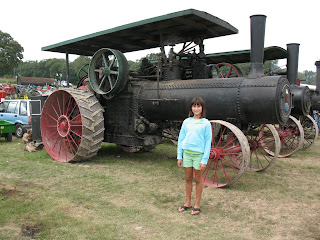 They’re pretty impressive in a lumbering sort of way, though not hard to evade. They’ve got a top speed somewhere south of “amble” and they give off plumes of black smoke that make them somewhat resistant to camouflage. But they’re cool, and that’s all that matters.

We hit most of the things we usually hit on these excursions – the calliope (which once again they wouldn’t let the girls play – I am beginning to suspect that the one occasion when they did was probably too much for somebody’s nerves in the Thresheree administration), the buckwheat and cornmeal grinders, the blacksmith and wheelwright shop where our friend Tom can usually be found plying his craft, and portions of the flea market, which is stocked with a more than adequate supply of kitsch, junk, and items of dubious taste. As a historian I confess to having a good time trying to identify the kitsch by decade or portions thereof if I can (“Amber glassware! Shades of 1974!”). One does what one has to in order to keep amused.

The last thing we did on the way out was visit the tractor rides, where for a nominal donation to the event the girls could steer their own tractor around a course. Only a couple of traffic cones died for the cause this year, but a good time was had. 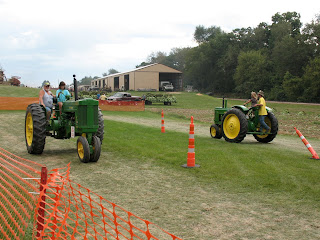 We spent yesterday at an Octoberfest celebration in the far northeast (of Philadelphia, that is) where we could sample bratwursts galore and every kind of beer that's brewed amid German brass bands. Now, that's what I call a great Labor Day celebration.

Deborah's boys (see my blog) would be so jealous with the tractors. I think they have three or four John Deere's and they are rebuilding one.