Career Opportunities At Your Very Fingertips

Sometime around the mid-to-late 1990s – an eternity ago, in internet terms – Denis Leary starred in a commercial.

I have no idea what this commercial was trying to sell me, so in that sense it was a failure even though I remember bits of it to this day. Most of it was a typical Denis Leary rant of the sort you either love or hate depending on how you take Leary, this time on the subject of technology and what was then the newly emerging world wide web. “Billions of dollars of technology,” he said, “and what are we doing with it?” “Browsing,” said a bored looking woman, much to Leary’s evident disgust. Why aren’t we using this technology to make money, that’s what Leary wanted to know.

The kicker was at the end when Leary confronted an old man posting pictures of his cat, no doubt onto a Usenet bulletin board (look it up, kids) or AOL chatroom. When Leary gave the old guy attitude, the guy just looked at him. “Do you have any idea what the margin is on cat pictures, slick?” he sneered.

This, more than any other prediction concerning the internet, is the one that has proven prophetic.

With two girls in the house and a broadband connection that goes straight to YouTube, LOLcats, and a host of other similar sites, I can tell you that the margin on cat pictures on the internet is intensely profitable. And don’t tell me that people aren’t making money off these things. Somebody is making money off these things, even if it isn’t me, the people posting them, or Denis Leary.

We spent a good part of tonight watching videos of a Japanese cat named Maru, who is endearingly cute but dumber than a box of hammers. Maru likes to stick his face into enclosed spaces, for example, repeatedly and without shame, and so ends up wandering around with all sorts of cups, containers and bags on his head. He rockets from place to place, falling off of whatever he doesn’t crash into. He is a terror to all sorts of inanimate objects, and it is a good thing those objects are in fact inanimate because otherwise they would die laughing at him.

Maru also has an owner who seems to spend all of their time videotaping him, which must be nice work if you can get it. I told you someone had to be making money off this.

You know, I have two – count e’m, two – cats, neither of whom has enough brains to tempt a starving zombie. 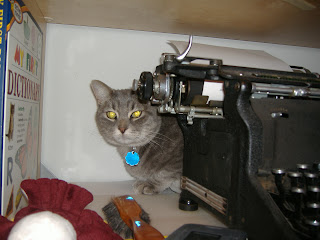 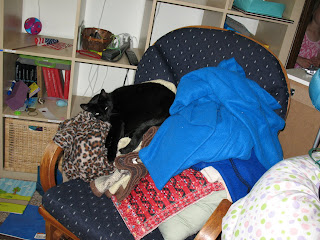 I also have a video camera.

There must be a business plan in there somewhere.
Posted by David at 10:07 PM

Did you explain to your kids that we learned how to TYPE on those things...?