Off To High Heights!

Today was officially the first day of school, down at Not Bad President Elementary.

Now, it must be admitted that there were mixed feelings about this around here. It has been a very nice summer, for one thing, and when the bell rang this morning that meant that this summer was officially at an end. And for another, well, let’s just say that at 7am yesterday the girls were still asleep, and leave it at that.

But we try to make this a fun day, because school should be fun. We believe this, which is one of the reasons why neither Kim nor I have ever really left. Eventually they gave us PhDs and told us to go away.

Will teach for food.

We’ve been building up to this for weeks now, buying supplies, planning outfits, and generally gearing up like MacArthur invading the Philippines. And today was the day! Lauren was headed off to second grade, and Tabitha – well, she was now officially a fifth-grader, the lords of the elementary school. No pressure. 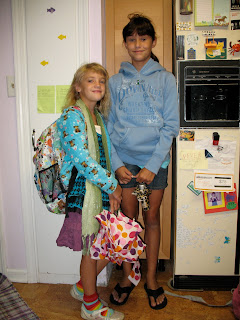 Note the umbrellas. It was a grey and rainy sort of day today, which dampened our shoes but not our spirits, not too much. Not any more than the simple fact of being ambulatory that early in the morning had already done, anyway.

The girls graciously permitted us to accompany them to the front of the school this year, though the back – where their friends were waiting – was declared off limits to us parental types. That’s okay. Pretty soon we’ll be required to drop them off several blocks away and slink back home with only our knuckles and a periscope peeking over the dashboard to announce our presence.

But for now, we’re still okay.