Back to the Future

If you’ve never been to Old World Wisconsin, you should. It’s one of the large number of things in Wisconsin that are kind of hard to explain unless you’ve been there, but not as sooty as the Thresheree or as twisted as The House on the Rock.

There is a reason why Neil Gaiman set part of a book at The House on the Rock. No other genre does it justice.

But Old World Wisconsin is more straightforward. It is a giant, open-air museum dedicated to the recreation of 19th-century Wisconsin life, though perhaps “recreation” is not quite the right word. They’re a bit more authentic than that. At some point in the distant past (defined as “before I got here and far enough back that finding out the answer would require real research, and thus we remain satisfied with mythology”) the state decided that it would be a really cool idea to scoop up several dozen historic buildings from all over and plop them down into ethnic villages on nearly 600 acres of the Kettle Moraine State Forest.

And you know what? It really was cool. Who’d have thought?

This is a place that the girls like, and we try to encourage their interest in historical things. We’ve been there before, but not since the tornado landed in their parking lot this past summer. So it was quite a shock, actually, when we got there. 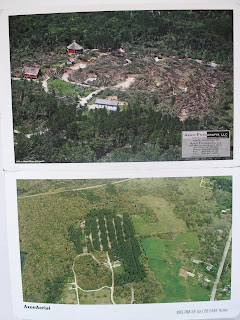 The bottom picture is what the parking lot used to look like, and if you look closely at the top left of the dotted area you can see the roof of the round barn that serves as the cafeteria. The barn is a whole lot more visible in the top picture, which was taken a couple of days after the tornado hit.

Fortunately none of the historic structures were damaged. We found out why when we visited the German village (containing farm houses built by – wait for it – German immigrants). Those old buildings are held together by mortar & tenon joints, which flex a lot more than nailed joints do, according to the guy dressed as a 19th-century German farmer.

Well, there you go. Not all progress is progress.

We had a grand time cruising through several of the villages – you can’t possibly see it all in one day, even with the trams they provide to get you from one village to the next. We listened to any number of interpreters describe the lives that were led by those who had built those homes and farms originally. Tabitha even won second prize in a “declaiming contest” at the County Fair they were holding at one of the villages. 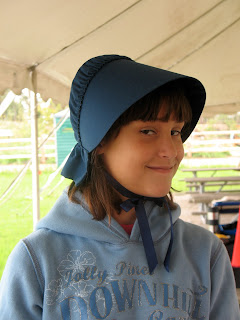 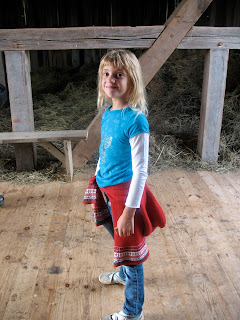 I was impressed with the roving brass bands that they had prowling about. You never know when a brass band will pop up – they are surprisingly stealthy. You wouldn’t think so, but it’s true. 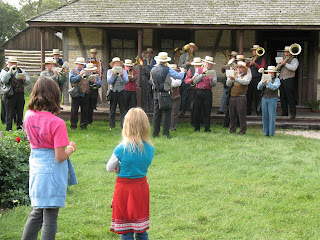 Lauren was most excited by the cemeteries that had been reconstructed around the African-American homestead. She tells us she is fascinated by graveyards, so perhaps we will have to do a bit of exploring around Our Little Town, where there are a few older ones. 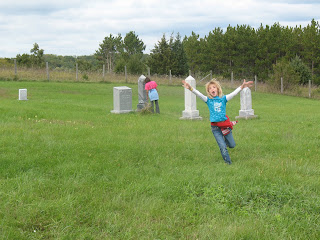 We told her she looked like Rod Stewart. She had no idea who that was. We’re not really sure if this is a bad thing or not. 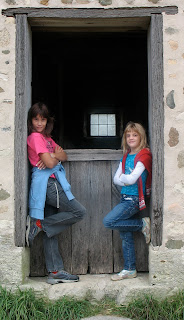