A Visit to Wisconsin

My parents made it safely back home today, with no interesting stories to tell about their drive. This is good. Travel is not one of those things you want to be interesting until you arrive.

It was good to have them out here in Baja Canada. We ran them pretty hard, and everyone seemed to have a good time.

The day after the County Fair we headed up to Devil's Lake, which is a place of Great Natural Beauty to the point where even I am not completely oblivious to the fact. It is a big, heaping baseball bat o' beauty upside the head is what it is. It's where the glaciers stopped, and when they melted they simply dropped all the boulders straight down. So the whole thing ended up being a deep lake surrounded by hills made of house-sized rocks. It's really quite lovely. Plus the girls got to splash about for some time, and that is all to the good. 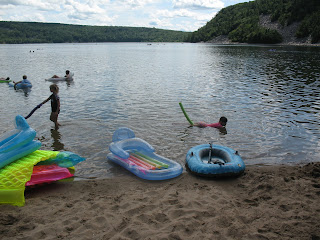 We spent the first part of Sunday at the Dancing Horses show.

If you've never seen the Dancing Horses, they're kind of hard to explain. They are at one of those odd touristy sort of zoo-like farms, the kind that have everything from camels to baby goats. You can see the bird show, or adopt a kitten, or ride around in the big wagon, but the main attraction is the horses.

These are some well-trained horses, let me tell you. Not that I would know, really - my knowledge of horses is limited to observations like, "My, but that's one big animal," which makes me about as much an expert on horses as I am on Namibian poetry - but they certainly did some impressive things.

You go inside to the arena - a small earthen circle surrounded by a couple of rows of seats - and for about an hour a squadron of light cavalry led by women in costumes runs routines for you, complete with all kinds of music and lights. Some of these routines apparently take years of training to get across to the horses - they're kind of like college students that way. Kim and the girls had seen this before, earlier this summer, when the Girl Scouts organized an expedition. It says something that Tabitha and Lauren were just vibrating waiting to see them again. After the show you can go up and pet the horses, if that's your sort of thing. 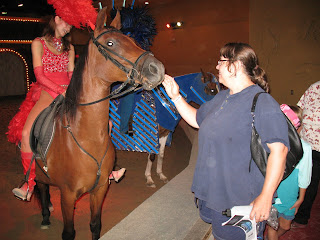 So if you ever come to southern Wisconsin, be sure to go see the Dancing Horses. Not saying. Just saying.

That afternoon Kim's parents came down and the girls had ALL FOUR GRANDPARENTS in one place! At one time! Can there be anything more exciting for a child? I think not. There was good food, good company, and a good time had by all. I hope that Tabitha and Lauren do as well in the in-law department as Kim and I did.

Next time, though, we're moving the big umbrella further away from the back steps, as the distance between the top of the railing and the bottom of the umbrella is just a bit too close, really. 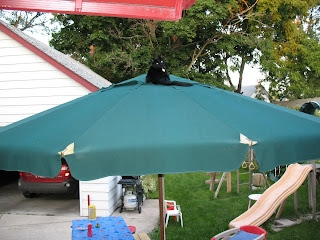 On their last night here we went down to the local minor league baseball team, a place we are visiting more often these days. And what's not to like? The stadium seats about twelve people, so you can get right up close to the action. There are contests in between innings, often involving small children trying to navigate large objects around obstacles. The food is good and you can eat pretty well without taking out a second mortgage. And somewhere in there they play baseball. Granted, not quite Major League caliber baseball - somebody really out to enlighten our team as to the concept of a "cutoff man" - but baseball nonetheless.

It turned out to be a good game, too.

Our Local Heroes jumped out to an early lead only to lose it an inning or two later. But they hung on, and in the bottom of the eighth they got it back and won. Not bad for a team sitting in last place in their league, with a winning percentage some 200 points beneath the team they just beat. We've seen these guys win twice this season, which is twice more than we saw all of last year and a significant fraction of this year's total. Apparently our luck has turned. I ought to be playing the lottery more, I suppose.

One of the neat things about minor league games is that they are colorful. We've been sitting out by third base these last few games, and thus we have struck up an acquaintance with Kaptain K, whose main purpose in life seems to be to keep track of the strike-outs tossed by the home team's pitchers and commemorate them with laminated sheets of paper with giant K's printed on them that he velcroes onto the railing after each strike-out. It matters if the K is backwards, apparently - that means a called third strike, as opposed to a swinging third strike. Or perhaps that is the other way around. My head for baseball statistics pretty much peters out after you get past batting averages and won/loss records, and even batting averages can get pretty slippery once you get down to the details of what counts and what doesn't. I've been following baseball off and on since the mid-1970s, and even now I have no idea what a "slugging percentage" is other than that one is better off with more of it than less.

Kaptain K is a generous sort, and he let Tabitha slap up the final K to end the game. She even got to keep the K. 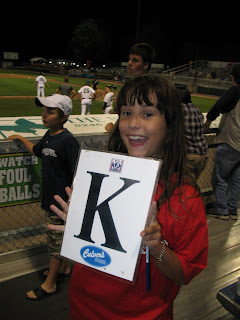