Fruits of the Earth

The garden is coming in.


Those of you who do not have gardens in your family probably get visions of delicate baskets full of colorful vegetables when you read that sentence - baskets that could be carried by a small child in one arm and laid tenderly on the table.
Those of you with gardens know better.
Because if you have a garden in your family, you know that "The garden is coming in" is meant to be spoken in roughly the same tone of voice as that used by German soldiers overlooking Normandy beach on D-Day, or by Malaysian vacationers during the last tsunami. Batten down the hatches, folks, and prepare to be overwhelmed - the lucky and the strong survive, and the rest will have zucchini carved on their tombstones.
This year Kim decided to go back to her old plot in the community garden that Our Little Town operates in the green space between the highway and the jail. She did that for a while when Tabitha was a baby, but as Tabby grew older and Lauren came along the logistics became untenable and we were forced into other options. We tried getting a share of a community farm, but found ourselves at the mercy of whatever they put in the box ("What's this?" "I don't know - boil it and see if it complains."). The farmer's market here is nice, but if you like to garden as Kim and the girls do it is not the same.
So gardening it was. 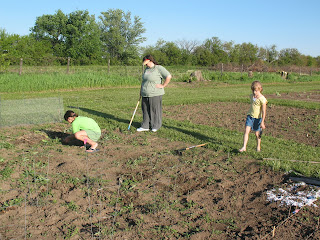 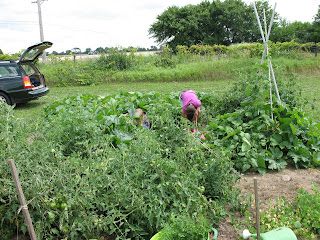 Late season maintenance
And right now we are up to our deleted expletive in squash, zucchini, tomatoes, miniature pumpkins, and peppers. We've eaten the carrots already, and the beets largely disappeared due to a tragic case of mistaken identity. If it weren't for the rabbits we'd be buried. 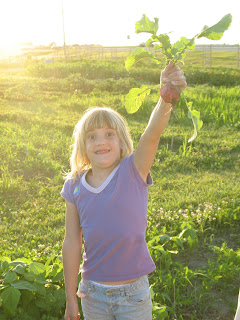 Of course the star of the show is Herbert.
Herbert is a cabbage, one that started life as a third-grade science project. Tabitha brought him home at the end of the school year and she and Kim plugged him into the corner of the garden, where he flourished. 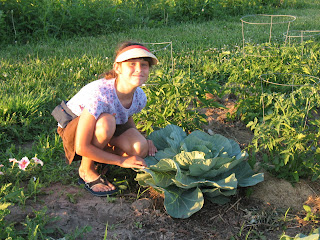 My, did he flourish. 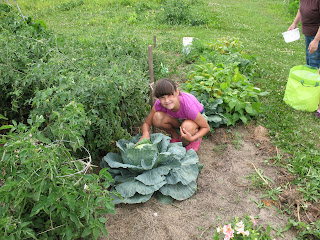 Kim cut him down a week or two ago when it was clear that either we ate him or the bugs would, and Herbert found himself brought home and put away.
What do you do with a cabbage that is bigger than your head? Or any other individual part of your body? At my age this is quite a statement, really. 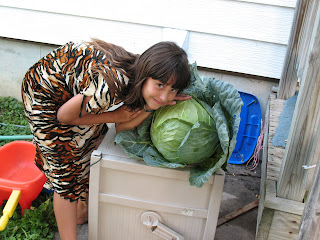 Well, I guess you eat it.
Tabitha was okay with this, despite having named her cabbage. That shows True Pioneer Spirit, it does, particularly since Tabby really doesn't like cabbage and thus is not in a position to benefit personally from this sacrifice.
Kim sliced off about one-seventh of Herbert and this has lasted us for two meals. Saturday we had braised cabbage, which Tabitha even ate a little of. "How was Herbert?" we asked her. "Okay," she said. 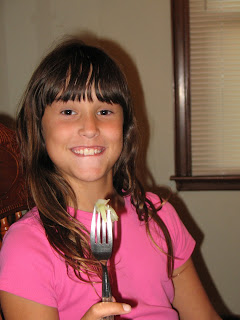 And then on Sunday we made coleslaw out of a small portion of the slice that didn't get used on Saturday. Having grown accustomed to getting the bags of pre-sliced coleslaw mix, it was quite an adventure for me to slice my own even with a large and dangerous machine doing most of the work. In the final dish there was a small percentage of "mulched cabbage" that made it in there before I figured out that I needed to turn the blade over to the larger chopping size. Live and learn.


There is still 6/7 of Herbert down in the fridge in the basement, and about half a seventh sitting in the kitchen fridge. At this rate, we should be eating cabbage well into Lauren's high school years.
Posted by David at 8:37 AM