A Farewell to Ed

Ed bit the dust this week.

Kim and I got married over a Thanksgiving weekend and even now I still regard the Saturday after Thanksgiving as our anniversary, regardless of the actual date. It's a whole lot easier that way, and we're always off the day before so it works out pretty well if we want to go away. We had a pile of events planned for that weekend in addition to the wedding itself. The last of them was a Sunday brunch for everyone to gather one last time at our apartment and eat bagels.

One of the cars making the trek from the hotel to our apartment that morning had my Uncle Ed and Aunt Rita in it, along with my brother and future sister-in-law. I have heard several different versions of this story over the years, but this is the one I remember.

Somewhere along the way they drove by a stuffed tiger, sitting out on the curb for the trashmen to come by the next day and haul it away. And by "stuffed tiger" I mean "mountain of artificial fur filled with the entire styrofoam output of New Jersey." Uncle Ed immediately pulled over to the side of the road and looked expectantly at my brother. "I can't get out," he said. "I'm driving." Keith thought about that for a moment - in describing this moment later his exact words to me were, "Well I'm not flying home with Rita" - and bailed out of the car. He grabbed the tiger and managed to stuff most of it into the trunk where it stayed long enough to reach our apartment. When they arrived, they dragged the tiger upstairs and presented it as if it were a prize-winning artwork.

Naturally, we had to name it Ed. 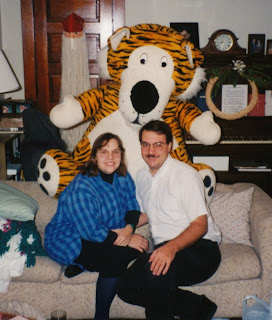 Newlyweds under the watchful eye of Ed.
That night, after most people had left for their various destinations, we gathered together all who had yet to leave at the nearby Appleby's for dinner, where I finally got to hear most of the story. Uncle Ed seemed very pleased at the way it turned out. Aunt Rita - an elegant woman - sat quietly listening to the story get told over and over. Eventually, when Kim made some comment about not knowing quite what we were going to do with this thing, Rita only shook her head and said, "Just put it out by the curb and wait for some other moron to come by and pick it up."

Ed eventually became one of the family. Kim patched him back up and we let him have the north side of our apartment. We'd decorate him for holidays. We'd pose him for pictures, one of which became our Christmas card one year. We'd use him as furniture. We brought him with us when we moved into our house. And when the girls came along, we let them play with him. Ed spent most of the last decade as a sliding board, actually.

But the ravages of time spare nobody, not even stuffed tigers. Battered, torn and largely ignored, he was consigned to the garage last month for disposal.

And then Kim needed a vast amount of styrofoam beads for a project down at Home Campus, and she knew just where to get them. It was a quick surgery, and now Ed is known as "Flat Tire" around here.