Tabitha got her hair cut yesterday. This is something of a landmark event around here, for a couple of reasons.

First, it hasn't happened for two years. She decided that she wanted to grow her hair long, and - it being her hair and she being the one who had to live underneath of it - we said fine. As long as she took care of it, who are we to argue?

And second, it wasn't a simple matter of wanting her hair longer. Tabitha decided that all that hair would go for a purpose, and she would grow it long enough to donate it to Wigs For Kids when it was cut off. She was the one who came to us with this idea, it should be pointed out, and not the other way around. How could we say no to that?

Wigs For Kids is a non-profit organization that provides wigs to children who lose their hair due to medical circumstances such as chemotherapy, burns and so on. They do not charge families for this, and they are always looking for donations of real hair in order to make the wigs.

The only problem is that the hair has to be at least twelve inches long in order to be donated, and Tabitha's hair doesn't grow that quickly. It's thick, it's lovely, but it is not quick. So for two years she has let it grow and learned the intricacies of taking care of long hair. 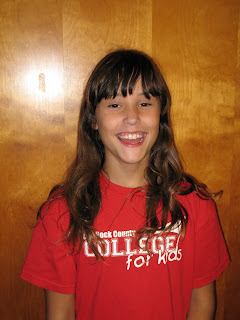 But yesterday was the day!

Kim - who was also jonesing for a haircut, it must be said - took Tabitha for her first visit to an actual salon instead of the kid's haircuttery that she had been going to, and they shared some girl time while getting their hair cut.

It came out well. 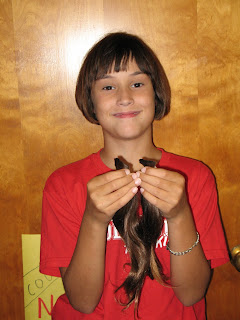 Tabitha's old hair is now sitting in a plastic bag, waiting to be mailed off. She's happy that the brushing is a lot simpler now, but somewhat bemused by the fact that she got all that insulating material cut off at the end of summer and just in time for fall and winter to come. The timing could have been better, admittedly, but then school starts next week so you might as well go in looking good.

And she looks great with short hair. :)