A Day at the Fair

The County Fair was in town! And so were my parents! What else could we do but introduce them to each other? My parents made the long drive out from Philadelphia last week, and it was good to see them. The girls are getting bigger every day and there is just never enough grandparent time, really. Kim's parents are not all that far away by midwestern standards, so that is good, but my parents only get to see Tabitha and Lauren once or twice a year.

I've always found that a bit odd, really. When I was Tabitha's age I had three grandparents still living. Two were all of five miles away, and the other lived with us. They were a part of our everyday lives. But we're scattered to the winds now, and we do the best we can. We drive east, we drive north, and the respective grandparents make the opposite treks, and we keep the family humming.

Thursday was actually a pretty rainy day here in Our Little Town. It looked as if it were clearing a bit at lunchtime, though, so we packed up and trooped over to the fairgrounds in the hope that things would be dry.

That would be a no. 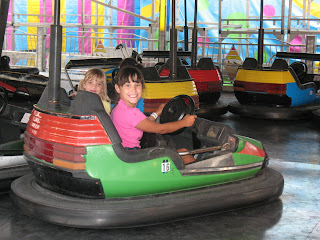 And eventually the rain stopped.

Toward nightfall us old folks got tired, but Kim volunteered to stay at the fair with the girls as they wrung every last bit of value out of those wristbands, leaving them mere dried-up husks of paper that fell off like year-old leis at the end of the night.

Fairs are really for the young, and Tabitha and Lauren are getting old enough to be young now.

It was a good time. 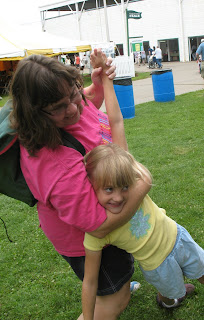