Welcome to the World!

We acquired a new relative today!

Kim's brother Rory and his wife Amy had a little girl at just after midnight. Well, Amy did most of the work, by all accounts. But either way, this evening there was a beautiful round little baby - 9 pounds, 4 ounces and all of 20 inches long - for us to drive up to the hospital to see.

Her name is Marin, which is a lovely name except that she is going to spend the rest of her life telling people that it is pronounced "MARE-in" like you're describing the whereabouts of a female horse, and not "Ma-RIN," like the county in California. Eventually she will either get it all straightened out or just accept it as an alternate pronunciation. If she's smart, she'll figure out how to make that work for her, and then the world will just have to watch out, won't it?

We arrived at the hospital a little past dinner time, famished. So after several tries we found the cafeteria and had a nice dinner - this just made Lauren's day, I kid you not. And when we discovered that the pies were safe for Tabitha to eat, well let's just say that multiple days were made right there and then.

And then, blood sugar restored, we headed up to see Marin.

There was quite a crowd there, what with various family members hanging out and assorted staff darting in an out like plovers at the beach. Everyone got to hold Marin except me, since I am still working my way through the Summer Death Cold From Hell and did not want to make this my "Welcome to the World!" gift. 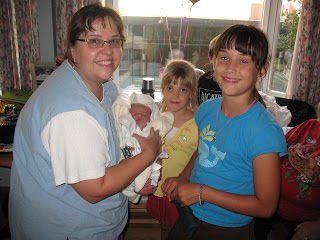 She slept the whole time we were up there. My guess is that this is not happening now.