Of Softball and Ice Cream

If you go to the ice cream shop on the last day of the Girl Scouts Softball season, you have no one to blame but yourself.

Last night was the final game of the regular season for both Tabitha's Green Eagles and Lauren's Hot Pink. There will be some sort of tournament next week for the older kids, so Tabitha still has a game or two to look forward to, and there will be an exhibition game for the t-ball teams on the last day as well, so Lauren has one more event. But the summer of softball windeth down.

It was a good summer. I even got to see Tabitha play once, when Kim and I switched roles for a game. She did quite well. 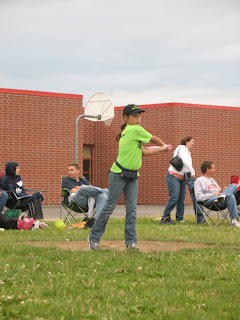 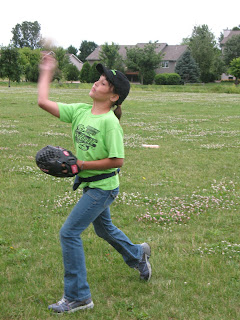 Lauren also did well, and I could tell how far she and her teammates have come over the weeks. As the first base coach, I no longer have to point out where second base is, and all the girls give me high-fives when they reach base. Can't beat that. 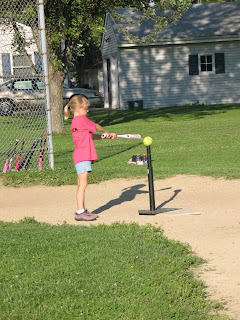 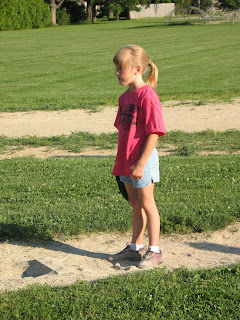 This week the Hot Pink team experimented with Coach Pitch rules, where - as one would suspect - instead of using a T to position the ball for batting, one of the coaches from your own team pitches. On the one hand, this is very exciting for the girls and they all are glad that, at last, they are playing Real Softball. On the other hand, in a league which does not count balls and strikes it does mean that the games last a bit longer, even if you lop one of the three innings off at the end. Some of these girls have a strike zone about the size of a plum. To balance this, we counted as a hit anything that came within twenty feet of the foul line. Spectators tossing balls to first base is just par for the course. If you didn't want to get involved, you shouldn't have come.

I got to pitch one of the innings on Tuesday. I used to do that, way back in the day. Of course, the day was sometime in the early Reagan years, but when your goal is to have as high an ERA as possible, that doesn't matter too much.

Honestly, that goal wasn't all that far from my experience on those teams either.

I was the backup pitcher on the firehouse team, and mostly my job was to get the ball into play so the fielders could take care of business. I was good at that, and so were they.

I also pitched on a church-league softball team when I was in high school. Our team had kids from at least four different churches, none of which placed any real emphasis on the divine goodness of hitting the cut-off man or knowing how to short-hop a ball. We had a center fielder who chased cars down the street, our other (and better) pitcher was a 12-year-old girl who once tried to catch a line drive with her forehead only to have her brother the first baseman catch it on the fly, and the final scores of these games tended to look like we had been playing basketball. I seem to recall losing one game by a score of something like 45-38. It wasn't like the other teams were all that much better than we were. We did have two players who really were good, though. One was a mountain of a guy whose hits tended to burn up on re-entry. The other, our third baseman, had a cannon for an arm. I learned, as the pitcher, to get down quickly on grounders to third, as I could usually hear the ball roar over me on its way to whoever got stuck on first.

Most of the Hot Pink girls eventually got the ball moving back at me on Tuesday, and by last night they were nearly Major Leaguers. Lauren is quite the slugger, actually - all that whiffle-ball practice in the driveway has paid off! Last night she ripped two good line drives back at the pitcher, who was surprised the first time but fairly agile the second.

And then it was Awards Time, because you can't do anything involving Girl Scouts without patches, medals and some kind of improvised ceremony.

And then - even better - it was Ice Cream Time. 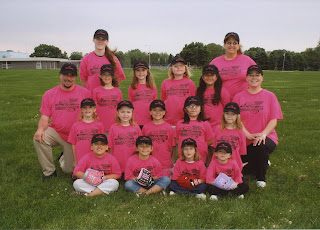 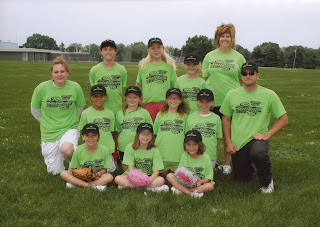