We Are Overrun With Rodents

We went to the pound yesterday to get some cream puffs and came home with hamsters.

Think about that sequence of events for a minute.

Rationally, there are no two clauses in there that belong together in any meaningful way, and yet it is an accurate description of our day. Fiction has to make sense. Truth is under no such constraint.

We had gone to the local farmers' market that morning for to indulge in some farm product - mostly vegetables this time, since our honey supply is the bees' knees and Kim still had an adequate stockpile of multicolored eggs - plus the inevitable bag of kettle corn as tall as Lauren that we cannot avoid whenever we go. On our way home, though, Kim remembered that the Cream Puff Guy was doing a fundraiser at the Humane Society.

The Cream Puff Guy is a local hero. If you've never lived in Wisconsin, you really don't understand the importance people here put on cream puffs. It's what high school football is to Texas, only the people are friendlier and less likely to make you want to shoot them on principle. Some benighted individuals will tell you that the best cream puffs are to be had at the State Fair, but they are wrong. The best cream puffs are to be found in Our Little Town, and the Cream Puff Guy has the national championship medal to prove it.

Of course there are national championships for cream puffs. Don't be silly.

The Cream Puff Guy used to be at the County Fair, but somehow he and they have been at odds the last few years so you have to catch him elsewhere. So it is always a big event when he makes an appearance, and when we pulled up to the Humane Society you would have thought the President was there handing out stimulus checks. I got in line, and Kim took the girls and their friend Grace (who had slept over the previous night) inside to see the cats and dogs.

I was almost up to the Cream Puff Window when Tabitha came rushing out to announce that if I agreed to it, Kim would get the girls the two hamsters that were up for adoption. I looked at Kim, who verified this.

Now, we already have two cats, both of whom have well-established credentials as critter-killers. We live under a constant barrage of recently deceased mice, moles, shrews, and rabbits. We also have a brand-new fish, who is shiny and gold but could not possibly compete with hamsters. 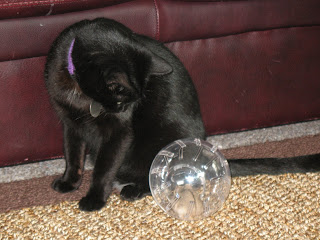 But you know, there is only so much ogre in me, so I said "sure" and went back to my cream puff foraging.

The hamsters even came with a bright pink plastic cage, with 1930s-style Art Deco grillwork and rounded corners. It's "Streamlined," in a WPA sort of way, and it's modular so you can add all sorts of attachments to it. Eventually it will cover most of the upstairs, and we can cancel our cable TV and watch the hamsters instead. Fun, and educational.

We ate the cream puffs for lunch. Yes, they are that filling. The Cream Puff Guy uses some kind of special cream that has nearly half again the amount of butterfat that most heavy cream has. It's neutron-enriched cream, the kind that bends light around it. You don't eat more than one of these cream puffs a year, not unless you want an up close view of the fireworks from the cardiac wing, but it's worth saving up those carb points for a special treat.

The girls are just thrilled with the hamsters, though we're still working on what to call them. The pound named them Thelma and Louise, which are not the most auspicious names to have, really, and the references go over the heads of most kids. I've been calling them Kibbles and Bits, though there has been resistance to these names. The girls have settled mostly on "Vee" and "Hammy." How can you tell them apart? I ask. "Hammy is rounder," Tabitha says. Well, there you go.
Posted by David at 1:26 PM