Of Fish and Fireworks

This Fourth of July we acquired a goldfish. Well, I say "we" but it was really Tabitha's doing, since she was the one who managed to get the ping-pong ball into the little glass bowl. We weren't really prepared for this, but the girls took an instant shine to what in my mind was simply a cat-snack in a bag, so we when we got home Kim found a large vase for it to swim in, nested the girls' glowsticks next to it, and settled in to wait to see if it would make it through the night. 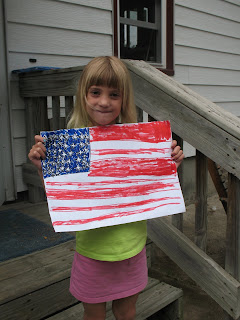 Our day had started hours earlier, with a quiet barbecue at home with Kim's parents, her brother Randall, and our nephews Kegan and Brody. The kids ran around having a good time, as kids will, while the adults ate and talked, as adults will. 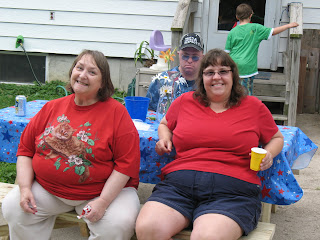 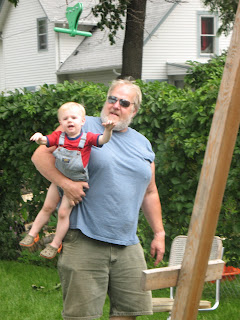 Tabitha even put on her magic show for us. 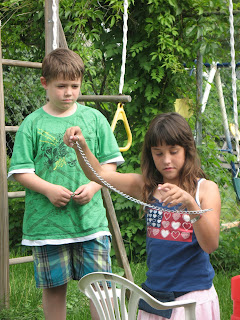 The party ended earlier than usual, since our guests had to go home. They used to stay for the fireworks, when the fireworks were closer to our house. Up until the last couple of years we could walk over to see them. The city had this great spot for shooting them off, right on the river, within easy walking distance of our house.

Of course, this spot also meant that the fireworks would arc directly over the hospital. You have to wonder about the decision-making process that went into that set up. Oh, to be a fly on the wall for that conversation.

Fireworks Guy: Hey, I've got a proposition for you!
Hospital Dude: What?
FG: How about we shoot off about 45 minutes of heavy artillery directly over the cardiac unit?
HD: Sounds great! It might even keep the newborns awake for the night - they get too much rest as it is.
FG: So, you want us to shoot down the Medivac helicopter while we're at it?
HD: No, those are expensive. We'll just tell people to schedule their emergencies for later.

We'd gather up the troops and throw every folding chair in a three-county radius into the girls' wagon and head on down to the hospital parking lot like some pyromaniac refugee family, and there we'd set up our chairs, lean back and watch the show.

And it would be a great show, too. Our little town put on a wonderful show for a burg this size - Siss! BOOM! Ahh! Lights, sounds, explosions, colors, and a finale that you could feel in your bones.

I even got to be on the crew one year when a friend of mine had to be out of town. I was the "flare guy," in charge of making sure the people who actually lit the fireworks had working flares with which to do so. You know what? It was loud.

Unfortunately that launching site has flooded twice in the last three years, though, so they finally moved the fireworks out to the edge of town, by the soccer fields. I can understand why, but I miss being able to walk over.

After our guests left, we piled all of the chairs into the car and headed over to the fireworks.

This wasn't even the first big fireworks display we had, either. Last week the evangelical church (correction - the largest of the evangelical churches; they crop up like mushrooms around here) put on its own display. I'm not sure what the connection is between the Prince of Peace and artillery, but then neither am I one to look a gift fireworks display in the mouth, either. They put on a nice show - my favorites being these gold ones that only went up so far before stopping and seeming to toss some blue sparks casually into the air. We had a spot right up front, it turned out, and nobody tried to convert us.

We set up our chairs on Saturday and quickly found the popcorn vendors. Fully salted, we then headed off to the carnival attached to the fireworks, where we not only found kettle corn (mmmmmm, kettle corn) but also the aforementioned goldfish.

Her name is Mella.

Once again, the city put on a great show - sponsored by the Odd Fellows now, instead of the Jaycees - and we left happy. We drove home through the pall of smoke that always covers our town on this day as if it were San Jose during wildfire season, and fell asleep to the musical accompaniment of Joe Sixpack and the Illegal Rocket Show, a long-standing tradition around these parts.