A New Home for Ashton

Tabitha’s best buddy is Taryn. They have been inseparable since Kindergarten, which is the main reason that they have not been in the same classroom since then. Not Bad President Elementary officials quickly learned that not much learning would take place under those conditions, and they have not repeated that experience. But the two girls get together at recess, and sometimes outside of school and over the summers. They fit well together, and we’re always happy when Taryn comes over.

Taryn’s cat Ashton passed on a while back, which was every bit the tragedy these things are. People who do not have pets never really understand this and they often say really brain-dead things about it – most of which contain the phrase “it was just a [insert type of animal here].” Those who say such things should be soundly thrashed with heavy objects until the urge to do so again is removed from their psyches.

Tabitha is not one of those people.

Last week she decided that what Taryn needed was something that would fit into the hole left by Ashton. So she checked out a book of cat-crafts from the library and found one she liked – a cat-shaped pillow that she could make herself. She found the fabric for it in the rag bin downstairs, sewed on the eyes and nose herself, and then did most of the blanket-stitching required to close it up. She even stuffed it herself. 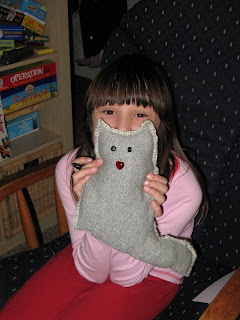 It did take a few days before she was ready to give it up, but on Tuesday the new Ashton found its way into the hands of the old Ashton’s owner.

That was a very nice thing to do, Tabitha, and we’re proud of you.
Posted by David at 4:08 PM