Making a Spectacle of Oneself

Lauren has decided that she needs glasses.

We have tried to tell her that this is not as much fun as it looks - that wearing glasses is not the carnival of laughs, thrills and delicious, delicious depravity that it might seem to be from the outside - but to no avail. Lauren is not someone who is easily dissuaded once an idea gets into her head, and she has clearly inherited the optimization gene from Kim. She's already told me that she wants to move to a new house, because this one is "boring."

So today I stopped by the local pharmacy and found a small pair of reading glasses for her. It was cheaper than moving. 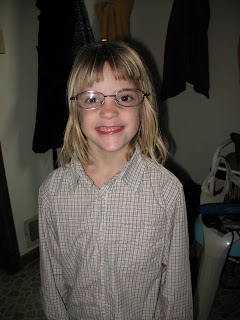 Lauren just loves her new glasses. She raced around the house with them for hours when she got home from school, and I have no doubt that she will try to sneak them into her backpack tomorrow morning. We've been trying to discourage her from wearing them too much - they do have actual lenses in them, the weakest I could find, and eventually she will end up at minimum with headaches - but so far this has been about as successful as you would imagine.

I've worn glasses since I was in graduate school. I arrived in Pittsburgh with a load of books in one hand and a prescription in the other, and eventually it all got sorted out. I've gotten used to them in the years since then, but I can't really say that I find them as fascinating as Lauren does.

Of course, given her genes she might as well get used to wearing them now, while they are still fun.
Posted by David at 11:53 PM