I have always loved the sound of typewriters.

Computer keyboards, with their muted taps, cannot compare to the staccato music of a manual typewriter. They’re more efficient and easier to use, granted, but they’re not nearly as satisfying.

A while back, Netflix served up Kit Kittridge, American Girl. It was basically Katherine Hepburn movie, only in color and starring children. Kit is a girl around Tabitha’s age, living in her family’s boarding house during the Great Depression, and her big goal is to be published in the newspaper. So there is an awful lot of skulking about, as nefarious events unfold (although not too nefarious – this is a movie named after an American Girls doll, after all), and there is an even more awful lot of the typing up of reports of said nefarious events.

Eventually Kit’s derring do and persistence are rewarded, and she is given the chance to be a full-fledged member of a medium that had not yet begun to die off, the way that it is doing now.

Lauren just loved this movie. She watched it over and over, and when we finally had to throw it back into the Netflix jetstream she decided that she wanted to use a typewriter just like Kit. Not a computer keyboard – she already was using that – but a real, old-fashioned typewriter, one that went "clack" and could be carried about and did not need electricity.

Fortunately my old portable was still sitting in its case up in one of the kneewalls upstairs, so I dragged it out and prepared for glory. It’s a small typewriter, with a 1970s-style sans-serif Swedish typeface, but it served me well and I figured Lauren could handle it. Unfortunately, it refuses to advance when you type letters, so unless Lauren wanted to produce perfectly white documents with one small black square in the middle, it wasn’t going to do.

Do you know how hard it is to find someone to fix a typewriter these days?

There is one outfit here in town that claims they will do that, but when I took the typewriter over one day they practically threw me out on the street. Are you sure you want us to fix that thing? Really sure? Cross your heart and hope to die? Will you sign over your property, future income and first-born as a guarantee that you’ll come back and pick it up when we’re done? How sure are you? Really sure? No, really, how sure are you?

First of all, this was for my second-born, so I wasn’t about to sign over Tabitha for that. Lauren can be the collateral for her own projects, thank you very much. Second, even I can take a hint when it is applied with the back of a shovel like that.

So I spent several fruitless evenings over the next couple of months trying to take the typewriter apart – but not too far apart – to see if I could fix it. Given the troubled state of my relations with the material world, the answer to that question was fairly obvious from the get go, but I had to do the experiment anyway. My dad has since suggested that I simply dunk the thing in a vat of rust-cleaner for a day or two, on the theory that at this point there is nothing much to lose. I may yet try that.

But in the meantime, I remembered that one of the things I had inherited from my grandfather was his old typewriter.

This was from back in the days when typewriters were typewriters, by God. Through the magic of teh intarweebs, I have discovered that it is an Underwood Type 6, made sometime in late 1945 – apparently the same model that John F. Kennedy used in the White House. It is a big, black, steel box about a foot square and almost that tall. There is no “1” key, but it does have a couple of fractions. It easily outweighs Lauren. My guess is that it was originally designed to be a tank, but was repurposed after the war through the simple expedient of adding keys to the front. The ribbon was kept from dissolving mostly by inertia, so I tracked down an outfit in California that sells replacement ribbons (and a more cheerful group of people you will never meet - you could tell that they just love old typewriters too). It arrived Monday, and I got everything all set up.

Lauren has just had the most wonderful time with this typewriter. She pounds away at it, working on her project. We’ve had to go over the concept of “carriage return,” a novelty for one raised in the computer age, but so far so good. Even Tabitha took a turn at it. 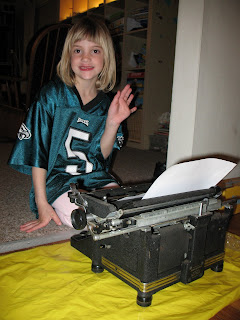 Right now the typewriter is sitting in Kim’s office, which is an improvement over the dining room floor but not by much. We’ll have to find a more permanent home for it. But the joyful noise of typing resounds through the house once more. I love that noise.