It was Art Show Thursday down at Not Bad President Elementary last night, and anyone who was anyone was there. There are a surprising number of anyones in our town, apparently, and it was just packed. But that is all to the good. These kinds of events ought to be packed.

The first thing we did was report to the large green room that serves NBPE as its cafeteria, auditorium and main gym. It was full of juice, cookies, and small children rocketing around in more or less the manner you would expect they would after consuming large amounts of juice and cookies. Fortunately there wasn't a whole lot of empty space for them to get up much speed, so no major injuries were reported. The only injuries were a number of cases of Carpal Tunnel Syndrome, suffered by parents filling out raffle tickets.

For you see, every year at this time NBPE students gather large quantities gifties into laundry baskets, each basket with its own theme, and raffle them off, with the money going to pay for juice and cookies. Since we had managed to forget about a previous fundraiser some months ago, we bought a pile of raffle tickets, each of which had to be filled out with a student's name, homeroom and phone number on the off chance that their ticket was pulled. Given our track record, we figured this would count as a donation.

After the girls had placed their tickets into the boxes in front of whatever laundry baskets full of gifties that they were hoping to win, we set off on a 'round-the-school journey, gawking at the vast quantities of Art that were on display. And let me tell you, there was some mighty fine Art on display. I may not know Art, but I know what I like, and this was good stuff.

Tabitha and Lauren each had a couple of pieces on display, and we searched until we found them. We also kept an eye out for the artwork of friends. It was quite the visual feast. 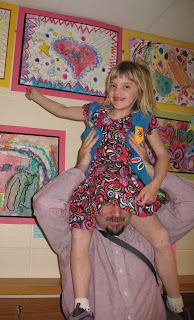 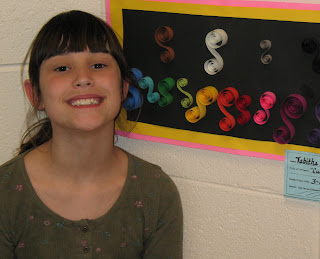 Then we headed back into the large green room, where we had shouted conversations with friends while hordes of children pinballed through what empty spaces there were in the crowd, waiting for the raffle drawing.

And you know what? Much to everyone's surprise - especially her own - Tabitha actually won a laundry basket full of stamping supplies! It is amazing how happy a basket full of stickers, plastic sheets and rubber stamps can make someone.

Add in the ice cream we got on the way home, and you couldn't design a better evening.
Posted by David at 2:14 PM

And for Tabitha, nothing could spoil that day. :)