Cry Havoc and Release the Walruses of Easter

Every Easter the walruses come to our house.

This can be somewhat disconcerting for people who don't know the story. For some reason, they expect animals that are, well, fluffier. And we have those too! But we also have walruses.

I was trying to explain all this to a friend of mine Saturday morning while the girls were ice-skating. This is not easy to do, and requires some repetition, as you might imagine. Eventually I noticed that over in the corner of the warming room there was a lady listening to all this and clearly debating whether to call one or another authority figure to come and take me away (ha ha, ho ho, hee hee...). But there's an explanation! I said.

I met Kim's family for the first time on Easter Sunday, 1994, shortly after we had begun dating. Kim was in charge of bringing the Easter bread, and being the new boyfriend I was helping out. As per the recipe, we saved out a bit of extra dough in order to make the chicks that sit on top. But you know, making chicks out of dough is not as easy as it sounds. It is not! They turned out a bit bloated, and "walruses" they have remained in family lore ever since.

This year it was the girls' turn to take up the family walrus tradition. 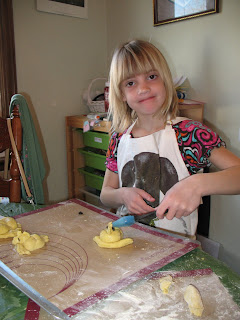 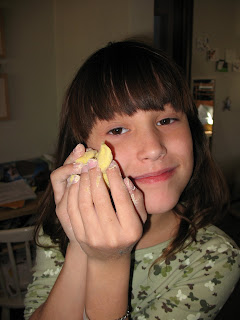 They did a good job, though: 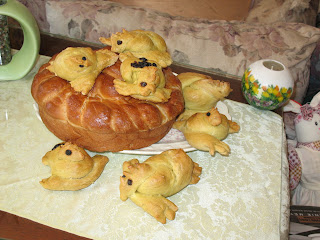 Our Easter was fairly low-key, as they tend to be around here.

Kim got the girls to dye eggs on Thursday night, and now we have about two-dozen brilliantly-colored hard-boiled eggs sitting in the fridge, making it much more festive in contrast with the other stuff that's in there. Other than the occasional contribution from Lauren, Kim is pretty much the only person who eats them so we're hoping she's hungry.

We drove up to Grandma and Grandpa's on Saturday - the officially designated "Easter" this year - and settled in for a festive day of family and calories. On top of everything else, it was Grandma's birthday last week and Uncle Randall's birthday that day, so we had all sorts of goodies.

I will never pass a drug test. I married into a Ukrainian family, and they use poppy seeds like other people use bacon - as an all-purpose Food Improver. There is nothing that cannot be made better by the addition of poppy seeds. Now if we could figure out a way to have poppy-seed bacon, we'd be set.

We had a good time. And it was warm enough that the various kids could run around outside for a bit. After a night-cap game of Uno, in which, for the first time in weeks Lauren did not clean our clocks, we went back home, poured the girls into bed like day-old coffee, and waited for the Easter Walrus to come.

No, no, the Easter Bunny. Fluffy. Think fluffy.

I'm not sure we wouldn't be better off with the walrus. The Easter Bunny, you see, has a sense of humor when he comes to our house. He doesn't just leave the baskets somewhere obvious and hope for the best - oh, no! Instead, he hides them somewhere, and then takes yarn - a different color for each girl - and twines it around the house, hither, thither and yon (and let me tell you, we have a lot of hither and thither in this house - and don't even get me started on all the yon; we've got yon by the yard), until one end is tied to the basket and the other to the bed of the basket's owner.

Naturally, the cats look forward to this all year.

This morning the girls were up long before we were, tracked down their baskets, and then had a healthy breakfast of pure sugar - all before we managed to drag ourselves downstairs.

Well, once a year, so it goes.

Happy Easter!
Posted by David at 1:31 AM

Walrii has a nice ring to it!