I bought a new tool this week.

This doesn’t happen very often. I’m not really a tool guy. I get no particular satisfaction out of household projects or mechanical adventures, which I regard in much the same way as I regard dentistry – useful and probably good for me in the long run, but nowhere in the top 400 things on my list of enjoyable ways to spend time – and the last time I bought a tool Obama was still in office. It was a small handsaw, as I recall. It was a very good handsaw – still is, in fact. I have used it within the last twelve months, I’m sure of it. If you are in the market for a handsaw, I can highly recommend this particular model. But yeah, that was a while ago.

This week I bought a digital infrared thermometer.

It is a snazzy little thing, shaped like the price-checker you’d find at your local supermarket back when they had such things. You point it at whatever object whose temperature you want to measure, pull the trigger, and on the screen on the back it pretty much instantly tells you how hot whatever it is you’re pointing at is. It can do this in Celsius or Fahrenheit, anywhere from “Yikes, that’s cold!” to “What happened to Dave that he’s just a smoking black ruin now?” It runs on a nine-volt battery that we now have a surplus of since we’ve switched to lithium-ion battery powered smoke detectors, which is handy.

I had to go to the local Tool Establishment to get this thing, since the even more local Hardware Store that opened in my neighborhood does not carry such things. I always feel like a liberal arts tourist when I go into places like that, and there was a fair bit of back and forth while finding the sale price of the thing (they don’t carry the sales flyers in store anymore, apparently – you just have to know), but eventually I walked out of the store with both tool and dignity intact.

It is a top notch thing as these things go.

The reason for this is that we have a new pizza oven in the back yard, one that I built myself from plans downloaded from the internet which instantly made me suspicious but if you can’t trust Manly Men Making Things Online who can you trust?

The plans called for 47 (precisely) bricks and three stone slabs, all of which could be obtained at our nearby Big Chain Hardware Store and then re-obtained at our Local Brick Place when those turned out to be substandard.  The Local Brick Place also sold me 7 more bricks since the plans woefully underestimated the number of bricks that were required to make this thing functional.

There’s no mortar involved, which is good because a) this means that it is not a Permanent Structure and therefore requires no building permit, and b) it also means that I could build it just by piling heavy things on top of each other until the desired shape was achieved. This is how they built the Pyramids, after all.

So I watched the instructional video six or eight times, noting with some puzzlement the idea expressed by the Manly Man that this pizza oven with its quick assembly time and lack of mortar could be a great addition to a camping trip as if people often carry 47 (or 54) bricks with them when they walk through the woods, and then took screenshots of the plans so I could print them out for later. They’re pretty simple plans.

It took me a couple of tries to get the oven right since it turned out that the first set of bricks had bumpy things on the outside (for spacing, apparently) that would not work for this project and the stone slabs were the wrong thickness (which only really mattered for the middle one) and then I needed more bricks to finish things and let me tell you that when you return to a place from which you have purchased exactly 47 bricks people remember you, but eventually it was there, waiting to make pizzas.

The deal is that you get some wood (we had a bundle of firewood left over from last summer that had been sitting in the garage all winter so it was nice and dry) and set it on fire in the lower cavity, and then you put the pizzas in the upper cavity and, well, bake them.

This seemed imprecise, and I noticed that the Manly Man had one of these tools to help him out in the video, which is why I ended up buying the snazzy new digital infrared thermometer. It allows me to measure the temperature of the upper cavity with far more accuracy than my pizzas really require without getting second-degree burns on my hand and even while remaining far enough away from the open flames that I can mostly still breathe through the wood smoke. So, win.

We tried it out last night. 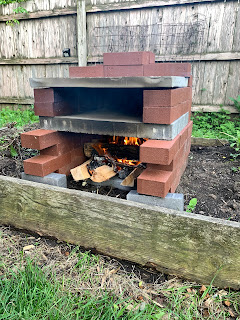 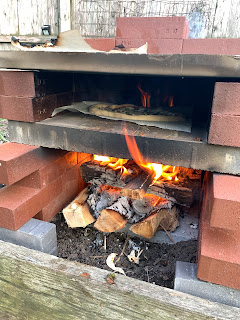 There are a couple of things we will need to tweak for the next time, all of which derived from the fact that the upper cavity didn’t get hot enough. It was about 600F (315C) and really needed to be around 650-700F (345-370C) which makes a big difference in pizzas. We either need to build a bigger fire or make the upper cavity smaller to hold more heat or do something else or some combination of all of that and then some. Perhaps a door of some kind, though that adds a layer of complexity that I’m not sure I want to deal with, frankly. We probably need to get new yeast for the dough as well, though that’s hardly the fault of the oven.

We'll see if this requires further tools.
Posted by David at 6:07 PM

My problem is that I have now been THOROUGHLY spoiled by making my own pizzas from scratch (although the secret of making the dough is apparently something I will never actually figure out on my own, so it's a good thing Kim can get it to work) that it's hard to go back to such things.

Pretty soon I'll turn into That Guy and start mansplaining about IPAs, at which point you are welcome to slap me.

But homemade pizzas are just so, so much better. Sigh.

I have no doubt whatsoever that they're significantly better.

It's just that I have, uh, significantly lower culinary (needs? requirements? There's an actual word I'm looking for here ... be right back ... ) standards. Lower Culinary Standards™.

I think I've said this before - I'm a meat and potatoes kinda guy. Steak. Ham. (Pork ribs and baked for dinner tonite!) Chicken. You know, MEAT. Pizza falls under the heading of filler or snack food in my world ...

I'll try other stuff from time to time (octopus was an ... experience?), but I have a very strict, hard and fast rule: If I can't identify it at a glance it ain't going into my mouth. That comes from less than pleasant surprises in an Air Force Chow Hall. (Some of the stuff they serve should be banned under the Geneva Convention! Holds true at most buffets, as well.)

I'm neither an adventurous nor a demanding eater, myself, so I understand what you're saying. I like sharp flavors (vinegar! aged cheeses!) and familiar things.

I cannot imagine eating an octopus - I don't even like fish.

But I do like pizzas, of almost every description as long as it has the right toppings (I explain the difficulties of getting disparate parts of the colonial population all on board with the American Revolution by telling my class, "Imagine getting 15 complete strangers to agree on what to put on a pizza. Now give them guns." They all nod when I say that). David Tennant once said that a really good burger is hard to beat but a really bad pizza is still edible. But homemade pizza is a category unto itself and now I'm doomed. I suppose there are worse fates.

Once you've read Anthony Bourdain, buffets are hard to go back to.

Not impossible, as I can attest. Just hard. ;)

Octopus has, at least in my experience, no taste. Texture - well, I've heard others compare it to chewing an eraser.

I didn't think it was quite that pleasant.

Fifteen? Lord! I can't get my wife to agree with me. And that's just two. (She thinks pineapple belongs on a pizza. Doesn't believe me when I tell her that no self-respecting Italian Human would do that to a pizza.) As for the guns, don't give my Viking any ideas - she's dangerous enough without actual weapons.

As for Anthony Bourdain, is there a specific title you had in mind? Nothing leaps out at me when viewing titles on Amazon.
On second thought, maybe I don't wanna know. We're down to one remaining buffet in Elko. $30.49 - Each - Sunday thru Thursday.
42.49 - Each - Friday (Seafood - no lobster, though) $37.49 - EACH - Saturday (Prime Rib) I doubt, seriously, that either of us could come close to eating enough food to make paying half those amounts a good value. Prices were at least somewhat more reasonable pre-pandemic. I think they're trying to make back two years of lost profit. Every week.

Besides, everyone I've talked to says the food is shitty, anyway.

Pineapple does not belong on pizza, at least not on my pizza, speaking both for myself and for my Italian heritage. There's a great little Instagram site I follow called Italians Mad at Food that is exactly what it says it is, and this is one of the things that they're consistently mad at. Also the things that pass for carbonara outside of Italy. I understand that.

Probably the best introduction to Bourdain is his first book, Kitchen Confidential, which made his name. It's raucous and a lot of fun and you learn a lot. He mellows out a bit in his later non-fiction books (all of which I have enjoyed). You could also just watch any of the television series he was in. They all have the same plot: Send an interested and interesting person (Bourdain) out somewhere to eat and talk with the locals. They're all good. No Reservations and Parts Unknown were the ones I liked most.

I do miss Anthony Bourdain now that he's gone.

Yeah, you can probably skip the buffet at those prices. We haven't been to one since the kids outgrew the local Golden Corral. There is a part of me that misses them, though.

Would you mind sharing the site where you found these plans? This looks like something even I could handle assembling, and I would be quite possibly the best wife in the world if I conjured this up for Father's Day.

Good luck to you!