1. The first of the Swedes has arrived! Our Swedish friends are coming to visit this summer, after a pandemic without much in the way of travel, but since all of the kids in both families are now adults this is a lot more complicated than it used to be. Everyone’s schedule is different, people are working, people are traveling separately, and so on. But David arrived on Friday and more will follow! Life is good.

2. Of course this is the week that summer chose to return with a vengeance. As one of my favorite current memes points out, I don’t want to say that it’s hot out there but two hobbits just threw a ring onto my front porch.

4. We have a lot of car shows here in Our Little Town. It’s that kind of town. I’ve never been much of a car guy, certainly not enough to go to one of those shows, but it is interesting to see them all driving by on their way to the show. Although, it turns out, that the age limit for defining a “classic car” is a lot more recent than I thought, which is how our 2000 Saturn station wagon (recently returned to us after we’d sold it to a friend eight years ago) ended up sitting in a grassy space with shiny 1956 Chevy’s on either side of it and a Model T across the way. Oliver’s workplace put on the show and asked if he’d bring the car by, mostly I suspect to paper the house a bit. In our defense the Saturn still has the ivy and astroturf that Lauren installed last summer so it looks snazzy. It’s just hard to imagine we now own a classic car that we once bought new.

5. Perhaps we should get the official “classic car” license plates for it too, although those come with restrictions.

6. We had a lovely Father’s Day on Sunday. Oliver, Kim, and David were already here and Lauren and Max came down from their dorms and we made pizzas from scratch and strawberry shortcake from berries we’d picked that morning and shortcake that Lauren and Max managed to find after much searching of Our Little Town’s grocery stores and it was a grand time. The house was full of noise and food and loved ones and that’s as good as it gets, really. 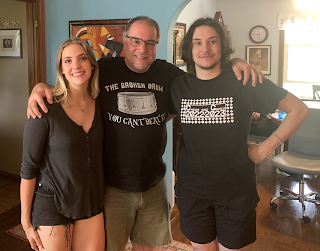 7. Mithra seems to be mostly blind now and somewhat arthritic, but is otherwise in good shape for a cat who will be legally old enough to vote in September. She still gets around pretty well, but we can’t rearrange the furniture for the foreseeable future.

8. We’ve been watching the Stanley Cup playoffs because they’re fun and a nice way to hang out together. Oliver and I watched some of the earlier rounds and now we’ve gathered a slightly larger crowd to watch the Finals. We don’t have a particular rooting interest in either the Avalanche or the Lightning, but I’m hoping Colorado wins because Tampa has won two Stanley Cups in a row already and dynasties are boring.

9. We also need to finish Prehistoric Planet, the BBC nature documentary on dinosaurs. We got through the first four episodes and then Kim had to go to Utah to grade AP exams and we haven’t gotten back to the last episode yet. If you haven’t seen them, well, you should. They’re marvelous, and somehow the producers convinced David Attenborough to do the narration, as should happen with all nature documentaries.

10. Harbingers of a rapidly approaching American Independence Day: a) Lefty, Claw, and One-Eye are already shooting off entire arsenals of fireworks here in Our Little Town and the over/under on garage fires is 4 this year; b) my viral meme from a few years ago is starting to pick up traction again so I will be on the lookout for this year’s trolls; c) the sweet corn is rapidly approaching knee high, which bodes well for later this summer, and d) the local stores are running low on jello, though this might just be a supply chain issue.
Posted by David at 2:45 PM

2. If it’s not a properly inscribed ring, it’s likely a movie prop or a fake.

3. Now that is a seriously depressing thought.

4. Just dropped a few bucks putting my 1993 Dodge Dakota (aka ‘Squeaky’) back on the road. Cheaper than buying a new one, and it’s also a bona fide antique!

6. Kids looking good! The old fart in the middle is an interesting counterpoint.

8. Toodles is nearly 16. She’s my wife’s cat, and I’m leaving ‘the decision’ up to her. She is procrastinating.

9. Sincere condolences are offered to Kim on this occasion of her recent torture.

10. a) Our County just passed a new ordinance last week regarding fireworks for this year: Don’t. Fines start at $1,000. If your firework starts a fire, regardless of size, the opening bid starts at $2,500 and also includes all costs associated with fire suppression. About time. (They likely won’t enforce it if you can prove you’re a ‘rump supporter, which would be about 2/3 of the population, but it’s a nice gesture just the same.)

c) Ahhh, sweet corn. buttered and roasted in the husk over an open fire. (Shit. The fire ban went into effect on May 15th. Damn.) Roasted over an LP flame in the gas barbecue just doesn’t have the same ‘ring’ to it.

d). All of the Lime Jello went to Utah. Don’t have a clue where the rest of it is going. Or, for that matter, why it would be of concern to you.

I only looked for shortcake at the store closet to us, where did the kids find it? We settled for angel food cake which isn’t nearly as good. Of course if I would have made my mom’s shortcake recipe that wouldn’t have been an issue.

I had suggested to hubby that he enter his 1998 Chevy van, better known as The Folly, in the show. If he was a laugher he would have laughed and laughed, instead he just shook his head.

3. Isn't it though? Speaking as someone who never really needs or wants to see the north side of 63F, I think I'm pretty much doomed. As is the planet, but there you have it.

4. When did things we bought new become antiques? I suppose about the same time we did. Sigh.

6. Thanks! I'm just there to make them look that much better. Not that they need my help, but as a parent you do what you can for your kids. :)

8. Aww. I wish you and Sue well with Toodles. It's a hard decision to make. Fortunately we don't have to make it right now, but demographics wins every time and it's coming.

9. Who do you think is the one pushing hardest to watch that show? SCIENCE, BABYYYY!

10. Good for them. I wish our county would do that, but I'm fairly sure that the majority of the county board is made up of Leftys, Claws, and One-Eyes, and if not then their voters probably are. We're not as dry as you are out west, though. Not yet.

There is nothing quite like good sweet corn swimming in butter and salt, mm, mm, mmmm. Though I have recently been introduced to elote (Mexican Street Corn), which is just wonderful.

Jello is a necessary part of 4th of July desserts! We have a mold of the entire country and most years we make a red, white, and blue layered dessert and then chew on the parts of the country we prefer. There are parts that get chewed harder than others, of course. :)

You know, now that I look at it I think it was angel food cake. We didn't think about shortcake in time to make any, and our oven is currently dead so I suppose it wouldn't have mattered if we had. Our big concern was to find something allergy-safe, and that took a few tries.

He should have entered! Eventually we'll take the place over. :)

1. Yeah ... that one's not properly inscribed. No doubt that it's real, but it's likely a movie prop or Cracker Jack Prize™.

4. I think the real question here is: "When did we become antiques?"

6. You have fulfilled your reason for existing quite nicely.

10(d). Don't want to come off as argumentative, but, In my world, at least, Jello isn't a necessary part of anything.

8. Poor kitty! I hope things happen peacefully and with much care.