Time in a Bottle

Last autumn, for long and complicated reasons that I will skip over here, I found myself in Hoboken NJ for a couple of days.

Let me be the first to say that Hoboken gets a bum rap. It’s a nice place as far as I can tell. It looks like someone took a chunk of residential New York City – Brooklyn, maybe – and restored it to about 1900 or so. It’s full of 4-story apartment buildings and above-ground power lines, and if you like urban spaces it’s an interesting place to wander around.

Also, it’s close enough to New York City to have good food. There’s a little deli that makes its own mozzarella and puts it on roast beef sandwiches large enough for an entire varsity football team. Mine fed me for three full meals before I finally conceded the point. It was wonderful. The hot peppers are really hot, though, so be forewarned.

There was a street fair when I was there, up on what I assume is the main drag of the town. They’d blocked off maybe a mile of it and the place was lined with booths of all sorts with a giant music stage at one end. I like those fairs – Kim and I used to run the craft show circuit here in Wisconsin back when we made homemade soap and it’s fun to see what people have to sell. Since I had the afternoon to wander around I figured I’d explore all of it.

I generally stick to the food booths at these things, if I’m being honest, though I did have a lovely conversation with a soapmaker as we compared notes.

My big find was a guy selling his own hot sauces, though. He had maybe a dozen varieties and you could try them with crackers. They were all good, but my favorite was one he made with datil peppers – it’s got some zip to it without being so hot as to rip your lips off. I have long since passed the point where I regard food as a contest. It has to taste good. So I bought a bottle and took it back to Wisconsin, where it lasted about a month and then I had to get more.
Apparently he makes the stuff in Sea Isle City, NJ. This set me thinking about old times.

Sea Isle was where we used to go for vacation when I was a kid. Everyone in Philadelphia goes down the shore somewhere for their summer vacations – it’s just what you DO if you grow up anywhere in or around Philadelphia – though the various towns each have their own vibe. Ocean City was for families. Wildwood was, as advertised, a bit more wild – if you’re there anywhere in June, for example, you’ll be inundated with graduating high school seniors. Sea Isle was somewhere toward the Ocean City end of that range. It had a nice beach, a movie theater that played Charlotte’s Web on rainy days, a fair number of shops that actually sold useful things now and then, and a boardwalk that ran for maybe a mile from the Spinnaker Hotel to the little amusement park that my memory insists was there though that might have been Ocean City now that I think of it.

We had relatives who owned a house in Sea Isle – my Uncle Charlie and Aunt Judy, in that vague Italian sense of “uncle” and “aunt” that means “they’re related to you somehow but it’s not worth going into the actual details of how” – so that’s where we went for our vacations. My dad’s company would shut down over the first week of August to retool so we’d pack up the car with enough supplies to invade Russia in the winter (I distinctly remember a cooler with a giant ham in it that would accompany us some years – we ate a lot of ham those weeks), wind our way through the wilds of South Jersey (this being before the Atlantic City Expressway, or at least before my dad decided that the AC Expressway was worth taking), and eventually find ourselves in Sea Isle where it would rain for at least a couple of days during the week so we got to know that house well. 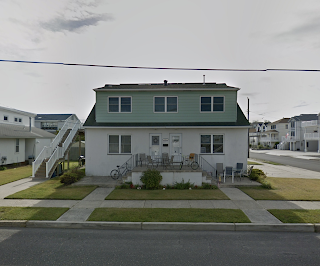 They’ve redone it a bit for the most recent GoogleMaps photo, but this is more like what I remember. It’s a three-unit house. Uncle Charlie and Aunt Judy lived upstairs. We’d have the right-hand unit. My grandparents would stay in the left hand unit when they came down with us, which wasn’t every year.

You went in the front door of our unit and found yourself in a small living room area with a couple of short couches. There was a hallway that led straight back to a bathroom, and there were two bedrooms to the right – one that opened onto the hall about halfway back and another in the rear that you had to turn past the bathroom to get to. If you turned right when entering and took the two or three steps to go through the living room you were in the kitchen – that’s the room that has the two windows facing the street. 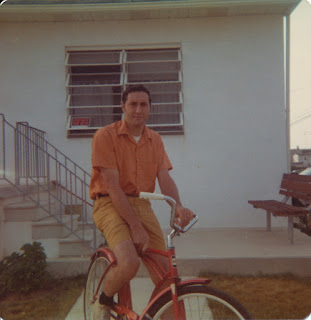 This is my dad around 1973, in front of the little porch area. I don’t know when they took the benches out – there was one on the other side as well – and there is a part of me that thinks it’s a shame that the louvred windows are gone. We’d ride bikes around town sometimes, he and my brother and I – rentals, since there was no way we could fit such things in our car for the ride down. 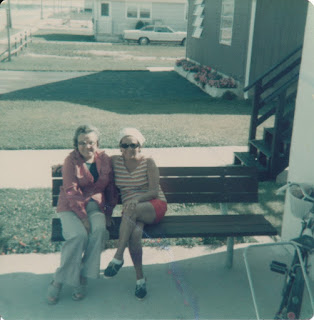 This one is my grandmother and mom, maybe a couple of years later, on the left-hand porch. You can kind of see the staircase going up behind them. That little side lawn was full of toads when my brother and I were little and we spent many happy hours catching and releasing them until one year they disappeared entirely and never came back.

The house faced the bay side of Sea Isle and there were no houses in the couple of blocks between us and the bay so you could look right out over everything. The ocean is about three blocks behind the house the other way. We’d gather our stuff and trek down there like MacArthur invading the Philippines and spend a happy day there bouncing around the waves on those inflatable rental rafts that they had back then before making the trek back for dinner. About a block from the beach we’d pass Phil’s Pizza, which had the thinnest crust I’d ever seen on a pizza to that point in my life. It also had a phone booth that my brother would regularly hit up for the spare change that people would leave in the coin return slot. He had a gift.

Eventually we started going to Ocean City, though. It had a bigger boardwalk, which was a draw when my brother and I were teenagers rather than small children. When my own kids were little my parents had moved on to going to Cape May so that’s the Jersey Shore that they remember.

It’s been a lot of years since I’ve been to Sea Isle. Charlie, Judy, my grandparents, and both of my parents are gone now, but my brother and I still remember the place. I hope there are small kids there in the summer time, making what seems like an endless three-block walk to the sand, passing by Phil’s Pizza, and coming back tired but happy like we did.

And if they pass a guy selling hot sauce, they should buy some. It’s good stuff.
Posted by David at 11:57 PM

My family would go to Ocean City, staying with my grandmother's friends ("Aunts" Kay and Margaret). We were just a few blocks away from Wonderland Pier amusement park on the boardwalk. One year I got the brass ring in the carousel, which got me a free ride on the next round!

If I had any poison ivy rash (must be common since I remember it), it was great to swim in the ocean, as the salt water did a great job of dessicating the rash.

Poison ivy must have been everywhere because I remember it too. Lotions, ointments, and salt water - those were the tickets.

Thank you for sharing your memories of a special place and time. I remember with fondness the timeless kitsch of the Atlantic City Boardwalk, and hope there are still good places there to get salt water taffy and a cartoon drawing of oneself. I have fond memories of taking one ceremonial turn of the slot machine at the Golden Nugget when I turned 19. I'm not into casinos, but it was an exciting rite of passage at the time (I'm pretty straight arrow, and limited my gambling to 50 cents, but "That was real money at that time".

Now that my husband and I are living in North Jersey I'm trying to convince him that Cape May would be charming (from everything I've read and heard). Also I hear there's a good bird sanctuary in Ocean City. We aren't that interested in the beaches though. Just not a priority.

I'm glad you enjoyed it!

I was never much of a casino person either, though I do collect coins - the last time I was in a casino I took about $20 in nickels and played the nickel slots. I got an hour's worth of entertainment and about half a dozen vintage nickels out of it, which wasn't a bad way to spend $20.

Cape May is very quiet - much of it is a designated historical district, after all - and if you go out to Sunset Beach you can see the wreck of the old concrete ship that sank there in the 1920s. At sunset they play taps. I hope it's still there - it was noticeably lower in the water the last time I was there and that was a few years ago. But there's a lot of nature and charming little shops, and if you can get to Hotdog Tommy's you'll have the best dogs of your life.