For about twelve hours today, I have nothing pressing to do.

I’ve caught up on all my grading, at least until midnight Central Standard Time when the next assignment for my US1 class is due. A couple of essays came in today for my ongoing class, but I have five working days to grade them and I generally take care of those on Saturday mornings because that’s the kind of wild man I am. They can wait. I graded my First Year Seminar stuff during the week since that’s technically part of my advising job and can therefore legitimately be completed during normal working hours.

I finished prepping my classes for Monday around noon. It’s the last class for the First Year Seminars and that’s usually pretty low key. The ongoing class requires no prep. And my US1 class is fun to prep since at this point it mostly means making a few edits to the lecture and then finding new images to throw into the PowerPoint slides. I don’t quiz them on the slides so I feel free to put anything I want in there, including random historically-themed memes as I see fit. On Friday we covered the southern demands for a stronger fugitive slave act in the 1840s, for example – demands which flatly contradicted their supposedly sacred ideal of states’ rights since their main objective was a new law that would force northern states to comply regardless of whether they wanted to or not – and it seemed fitting to throw this one in there. 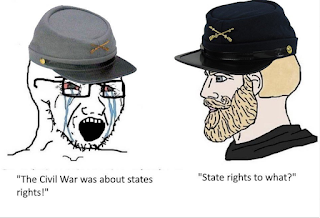 It’s a grey, rainy day, just a shade over freezing, and therefore not a good day to be outside doing anything since most of the county is covered over in a thin layer of glare ice at the moment. The traffic reports are just several long lists of accidents, one after the other, and that’s not really anything I care to join. I did manage to go to the barn and feed the chickens, but that’s about the extent of my journeying today.

I watched soccer (Wolves lost to Liverpool in a heartbreaker). The Flyers are on in less than an hour. I have a book which I have been trying to work up the focus to read for over a week now – it’s a good book by one of my favorite authors, but I finally decided to start over because I was a hundred pages into it and couldn’t remember anything that had happened and hadn’t picked it up for days. It’s been that kind of year.

Kim and I watched the holiday episode of Great British Bake Off that aired last year (why those episodes are shown on a one-year delay when the regular episodes are shown on three-day delay is one of those mysteries that Netflix keeps to itself) and a couple of episodes of a show called The Dinner Party, which is entirely in Italian and consists, as near as I can tell, of a group of old friends who hare off around Italy (one at a time in partnership with the host) in search of food and then come back to the host’s house to cook that food and give each other grief in the way that old friends do. This is the extent of my television these days if you don’t count soccer or hockey.

In theory I could be getting ready for Christmas, at least the inside stuff (the outside lights will wait for a less ice-encrusted day). It is December, after all, and I have now consented to acknowledge the existence of Christmas. But I have had a hard time getting into the Christmas spirit for a while now and this year is more so than usual. Eventually. Not today.

It’s a low key sort of day and there haven’t been many of those this year, so I’ll take it.
Posted by David at 4:20 PM