A Festival of Holidays

It’s been a busy week for holidays around these parts, even if you exclude Thanksgiving.

Except that the Saturday after Thanksgiving we were celebrating Kim’s birthday, which wasn’t actually that day either except that both Oliver and Lauren were still home from college that night and you should always celebrate holidays when you have the people there to celebrate with, so we had a lovely dinner and a homemade carrot cake (which was not intentionally meant to honor the Great British Bake Off final but we can just say it was anyway because it sounds good and we did stick a little Welsh flag on top of it somewhere just because we could) and there was a generally good time had by all. 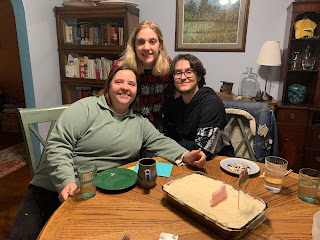 And thus the circle of life comes careening around to where it started, tires smoking and radio blaring.

The net result of all of this is that we have had several good meals, at least one homemade cake (to go with the leftover pies and pizzelles from Thanskgiving), and a few nice cards.

I did actually order a birthday present for Kim before her birthday, which is kind of a victory for me, but it did not arrive on Saturday or today but is expected to show up tomorrow which isn’t any of the aforementioned holidays at all but we’ll have a good time anyway because there will be a gift and that’s always a reason to celebrate. We’ve decided more or less what we want to get for ourselves for our anniversary, but we haven’t even gotten around to ordering it let alone having it show up. It will get here when it gets here, assuming we don’t change our minds first, and then we’ll celebrate all over again.

Sometimes having a Moveable Feast Tradition is more entertaining than just trying to get it all done on the exact days.

I'm gonna go out on a limb here and venture a guess that you're the type of people who, after having spent two weeks working on a 1,000 piece puzzle, would not be all that disappointed to discover that three pieces had been eaten by the cat.

Hippie Anniversary/Birthday/Turkeygiving/Moveable Feast Tradition™ Day(s)! (Belated though this may be.)

Flowers, Gifts, and Good Food all around - Can't wait to hear this year's version of Christmass ...

Well thanks! Never too late for good wishes. :)

The last time we did a 1000-piece puzzle that ended up with a missing piece, Kim made a piece to replace it with. Some weeks later we did locate the missing piece - in the cat's favorite sleeping spot, oddly enough - so now we have two.

Christmas is going to be interesting, as there may or may not be travel depending on the state of the world. We'll see.