1. Less than two full days before der Sturmtrumper is tossed out on his seditious ass and onto the trash heap of history. He leaves behind a diminished nation, a fragmented system of alliances, a faltering economy, a raging and deadly plague that he actively made worse, a treasonous and growing right-wing extremist movement that has already staged one failed coup and is eagerly working toward the next, the lowest job approval of any president since recordkeeping began, a desperate desire to destroy everything that is worthwhile about the United States that will have him actively sabotaging this nation’s future right up until the nuclear codes are ripped out of his palsied hands and replaced with subpoenas from half a dozen active criminal investigations, and a culture of slime and corruption that will take decades to remove. Naturally his base continues to worship him. It’s going to be a long few years coming up, yes indeed.

2. Now you know why companies escort fired workers from the premises immediately and don’t give them time to wreak havoc. We may need to amend the Constitution (again) to make the inauguration of the next president happen much, much faster.

4. The semester is about to start for at least one of the campuses where I teach. Another never stopped. The third one doesn’t start for two weeks. It has been very difficult to maintain a focus on class prep when there is treason in the air, I have to admit, but I have my nearest classes ready to go and my other class is just waiting for a bit of information that someone else needs to provide, so all in all it’s not a bad position to be in.

5. I’ve managed to get through about half of the bookshelves in my office for my weeding project. I have now conceded that I will never get a tenure-track position – that the adjunct life is for me, whether that was my goal or not – so a lot of books that “might be useful someday” have now lost their “someday” and can go to someone else. I’ve got eight boxes of books in the mudroom waiting to be donated to somewhere and honestly you can’t really tell. I consider that a sign of a life well lived, to be honest. I still need to go through the other half of the bookshelves, but as noted the semester is about to start and there will be precious little time for such projects.

6. Which is a shame because my computer has now reached the point where I must update the OS if I want any of the other programs to update. I had planned to make that change over break, but of course never did. So now I’m sitting here thinking about whether I want to go from macOS 10.13.6 to macOS 11 at the beginning of a term and what the odds are that this will convert my computer into a shiny paperweight. I threw this problem out to my Facebook friends and got some good advice, so perhaps I will follow it. We’ll see.

7. I did manage to get my email transferred over from Entourage (which hasn’t been supported since 2013 or so) over to something that will actually get updates for a while. I consider this a victory. Someday I will figure out how to archive these things, which will make me happy even if most people have no idea why anyone would want to do that.

8. While there were some very nice gifts exchanged among us this holiday season, perhaps the one that has gotten the most use so far is the pet heating pad that we got for our 16-year-old cat. It’s always on at a nice low temperature so it’s not a fire hazard, and the cat has barely moved from it in weeks – “sitting there like a gas station hot dog,” according to Oliver. I’m thinking of changing her name to Ballpark.

9. For several nights last week we had pretty thick fog and below freezing temperatures, which meant that you’d wake up and everything was rimed with ice. It was really beautiful. You need that these days. 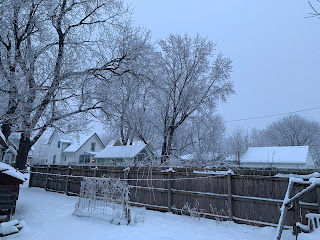 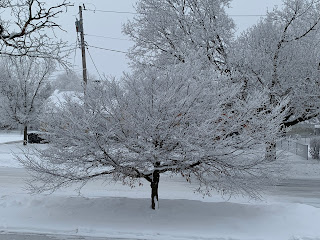 10. I took Oliver back to Small Liberal Arts College yesterday. On the one hand, it was nice to spend the time with him in the car, and he’s happy to be back with his group now. On the other hand, it means that we’re down a person here. Also, I had to stop in some tiny little town on the way back to get gas and use the restroom and there wasn’t a single person in that place wearing a mask and seriously what the hell, people? Oh well. I did get to see a bald eagle fly overhead – the second one in less than a week, in two different states – so that was cheering.

11. Now that Lauren is 18 she has officially reached the point where she can make some decisions without us, and the one that she had most been looking forward to making was getting her nose pierced. I realize that I am Old and Uncool but I think it looks nice, really. 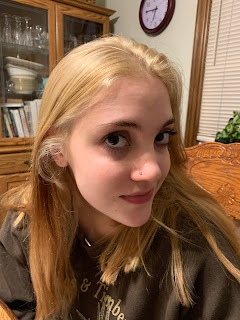 12. It’s amazing how many people still have their Christmas lights up. I think people need them more than usual these days.
Posted by David at 9:26 PM