It’s been an interesting week in technology here in Our Little Town, in the liberal arts sense of the term, the way three-headed frogs are … interesting.

Last week I was on the phone with our Internet Company trying to get a different question answered when, for some reason, the person on the other end of the line suggested I do a speed test on our service. “Huh,” he said. “You are paying for a lot more than that. We need to get a tech there to take a look at this.”

Say what you will about their billing department, but the tech support has always been top notch.

They also said they’d send a new modem, which never quite happened and eventually Kim had to go to the Internet Company’s office here in Our Little Town and pick one up directly. It turned out they had no record of this but cheerfully admitted that this did not mean that Kim was wrong and they gave her a new modem anyway, which it turned out did not actually solve the problem.

So last Friday an amiable tech fellow showed up at my door, took a thorough look at everything coming into the house and out of the splitters, replaced the modem again, and said that as far as the Internet Company was concerned everything was fine. He even had me download a speed test app for my phone which showed me getting exactly what I should be getting.

“The problem is somewhere between the router and your computers,” he said. “I think your router’s probably fine, but if you want to check without spending the money for a new one you can rent one from us for a month for $5, and if it solves things you can either keep it and keep paying rent or return it and buy your own. And if it doesn’t solve things you can return it and it’s probably the fact that your computers are So Old.”

Sometimes you can hear the capital letters.

Not that he was wrong, mind you.

So Kim took the old modem back to the Internet Company and the next day she went back and got a new router and we plugged that in and it solved things for Kim but not for me. So the problem was kind of both problems, and if we get a new router for ourselves we can return the Internet Company router and why does this begin to sound like an electronic version of three-card monte? Guess where the connection speed is! This machine? That one? Oooh, sorry, mate – maybe next time?

I do get enough speed to do what I need to do, though, so that’s good, even if my computer is objectively old. So am I, after all.

Which brings us to our second tech crisis, which is that for some time now I have been unable to update my Office software. Microsoft forces you to do that periodically, because if you don’t then you can’t actually use the programs to do anything. I can’t tell you how much I enjoy getting messages saying that I don’t have permission to access files I actually created. But for the last month or so I’ve been getting other messages saying that I can’t update these programs because my OS is too old.

It was, admittedly, three generations back from the current Mac iteration.

I did a little research on macOS11, which is the one that Apple is flogging now. It’s new! It’s wow! It’s shiny! It has no back compatibility with things that are 32-bit! Your bits must be 64 in number! 64 is the number of the bits, and the number of the bits shall be 64! 65 is right out!

I have a lot of older programs, much to nobody’s surprise. I’ve known for years that I need to upgrade my email program, for example, because it hasn’t been supported since 2013 or so, but it took until last week for me to figure out how to transfer all of the thousands of messages over to a different program that would be updated from time to time now. Format changes and all that. But I got it done! It works!

I can read my old emails and receive emails in one program, but I can’t figure out how to send them from there. So I have a different, also updating program, that sends them.

With this I have kicked the can of this problem down the road and can worry about it some other time, probably in 2026.

Also, half the meetings I go to these days are on Webex, which does not function with my old OS anymore. The crashing every 8 minutes or so thing kind of tipped me off about that, and it turns out that this was a known issue.

Why if something is known is it not fixed? I don’t know. Ask the IT guys.

I didn’t really want to upgrade to macOS11, since it is new and therefore not terribly well tested. But it turns out that when you go to Apple’s web page and click on the links to take you to either of the two OS versions between mine and 11 you get taken to either iTunes (if you click on it in Firefox) or the App Store (if you click on it in Safari) and in neither of those places are you actually allowed to download those OS programs that Apple insists are there.

I bit the bullet and downloaded it on Friday. I probably should have done this two weeks ago, prior to the semester starting, but so it goes. 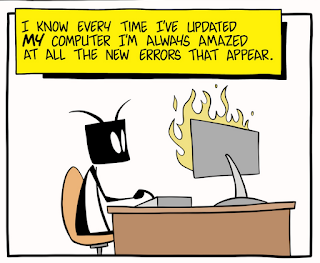 It downloaded and tried to install and kept getting hung up and I went to bed convinced that I had bricked my computer at the start of the semester and trying to figure out how to work around that. This is not a good place to be. Fortunately the next morning the computer had figured things out and was happily booting up just fine.

I’ve been using OS11 since Saturday, and so far it’s been okay. Not many changes that I can tell, which is a recommendation coming from me. The alert sounds are different and I’m sure there are all sorts of features that I am pointedly ignoring, but otherwise it looks and acts mostly like my old computer, which is really what I wanted.

Except that every video chat software program I own (and I have to use three different ones for my various jobs) forgot how to access my mic and camera and screen and required a restart to fix that, including once in the middle of a class I was teaching.

And the program that the Mother Ship Campus uses to allow us to get access to work files from home is incompatible with OS11 – another “known issue” that somehow hasn’t been fixed. So that has been entertaining.

All I want is for it to do what I want. I don’t need it to do everything. Just certain things.

Every time I upgrade, it is a constant struggle to get back to where I was.

I'm currently running 10.15.7 - so I have a while before having to dive off the high board hoping there is water in the pool again.

Safari has developed an annoyingly peculiar twitch, so I'm trying to figure out Chrome and attempting to transfer all of my bookmarks to there. It's a genuine PITA. I can't say that I actually hate Chrome, but ... the difference in definition between the word hate and the word loath is a difference I wouldn't want to try to live on.

My favorite new system message is that my Sophos security software is incompatible with future versions of OSX - (favorite only because I get to see that message more often than I see my wife.)

Wishing you 'LUCK' in your new somewhat self-selected endeavor. It is my sincere hope you don't actually need it.

The problem with 10.15 is that it has the same back-compatibility issues with 32-bit programs that 11.0 does, though it's probably more tested and stable. So far, so good, though. The only major issue I've had so far has been the VPN issue with the Mother Ship Campus, and IT finally figured out a patch for that yesterday.

I keep thinking I should switch from Firefox to Safari, but I just don't find Safari's interface as comfortable. We'll see. It does a better job of printing online articles to pdf, which is a function I use a lot, though.

The next iteration of my US2 class will run through the Trump Coup, and it will be fantastically cited. :)

The Apple folks recommended Malwarebytes for a security program and it seems to work well - and its free. I suppose I could upgrade to something else, but so far so good. I've had it for about two years now and it's worked just fine.

I hope I'm not jinxing anything, but I may have gotten through the upgrade with all of the problems I'll have for it. Maybe. Perhaps. We'll see.