Our Trip to Europe: We Walk Around Gamla Stan

Our first full day in Sweden started with this sight: 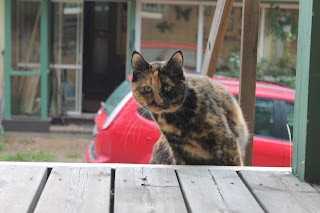 This was to be a running story, as the cats (there were two) were very intrigued by the fact that Kim and I ended up in a little outbuilding that usually serves as Sara’s office.  It was a comfortable place to sleep, though we did end up locking ourselves in the first time we tried to keep the door from swaying open.  I ended up having to slither out of one of the windows and fetch someone with a key to free Kim and let me tell you my slithering days are mostly long past now.

We had a nice leisurely breakfast and spent some time hanging out on their porch before we headed out to Gamla Stan.

Gamla Stan is the old part of Stockholm, the original city from the medieval period.  We have been to Stockholm three times now and it’s one of the things we always try to do.  We had a list of places we were hoping to get to and we made it to most of them.  The only one that we couldn’t get to, in fact, was the polkagriskokeri, the candy shop where they make polkagris – what are, essentially, Swedish candy canes.  They’re straight instead of curved, about as thick as your thumb and as long as a paperback book, and come in a wide variety of flavors from the delightful (raspberry, peppermint, apple, and so on) to the inexplicably popular yet entirely inedible salt licorice (and yes, I tried one last time – it was “run out and chew on the asphalt to get the taste out of your mouth” ugly, but a very popular flavor in Sweden nonetheless).  The shop in Stockholm is closed for renovations and won’t be open until this fall, unfortunately, but that just means we’ll have to go back.

We’ve reached the stage of our lives where our children can now ferry us about, so Maria actually drove one of the cars down to Gamla Stan.  Tabitha drives.  Lauren is learning.  We’re getting old.  It has its benefits, to be honest.

While Mats, Sara, and Maria went off to find parking, the rest of us – me, Kim, Tabitha, Lauren, and Helena – began wandering around the old city.

It’s a lovely place, full of narrow streets and tall, brightly colored buildings (and tourists like us, but there you go), and every so often you hit a cross street and you can see the water that surrounds everything.  Gamla Stan is, quite literally, an island in the middle of the harbor and when the sightlines open up it really is kind of surprising. 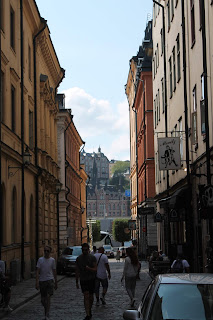 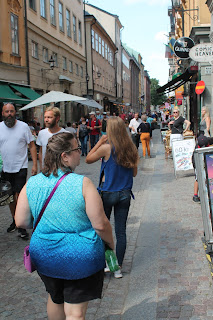 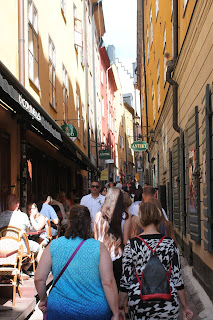 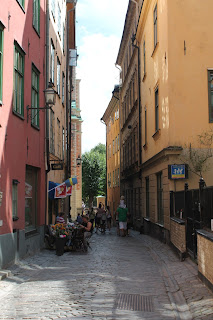 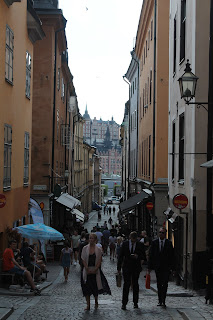 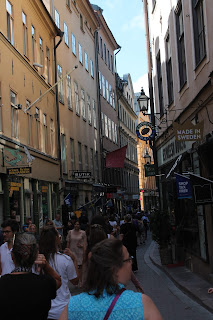 We went in and out of any number of little shops.  There was a glass knick-knackery that had all sorts of nice lamps, as I recall, and a few souvenir shops, in one of which I managed to find my keychain for this part of the trip.  We also found the rune stone building – somehow a centuries-old rune stone got put into a building in Gamla Stan, and now people like us stand next to it and take photos and really that’s about as good a life as a rock could expect, I think. 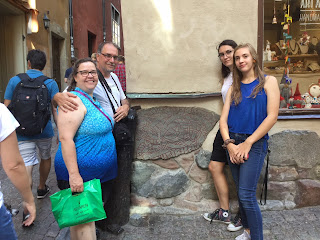 There were narrow alleys full of stairs, stickers and graffiti for us to pose in front of. 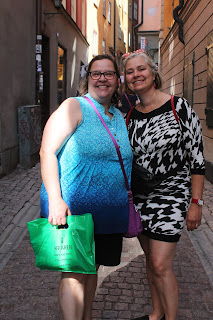 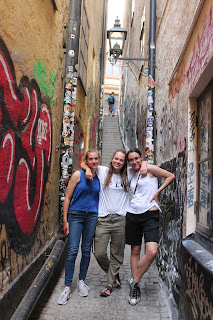 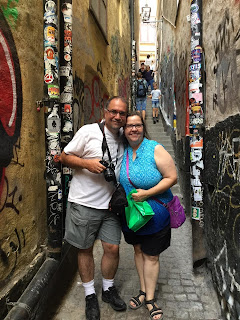 And sometimes there were just little side streets. 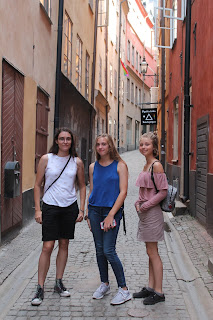 Eventually we found a place to eat lunch – you went in, placed your order, dished up the side dishes from a table in the middle of the restaurant, and then went back outside and waited for your actual meal to arrive. 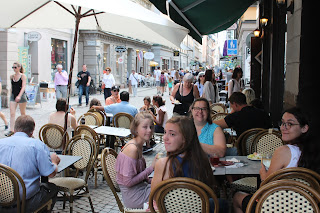 Mats, Sara, and Maria caught up with us at lunch, and we ventured forth from there to other places in Gamla Stan.  Did you know there is a red building with white stones in the facade, one stone for each victim of the massacre committed by a Danish king right there in the main square?  It’s next to another couple of buildings with cannonballs embedded in them and the place where they used to give out the Nobel prizes, which I suppose makes a kind of sense. 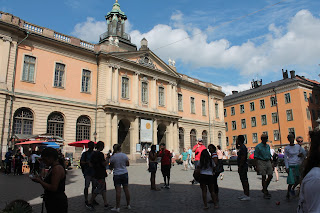 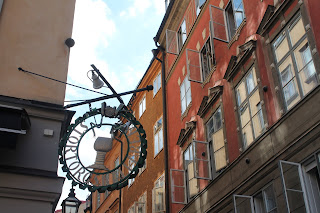 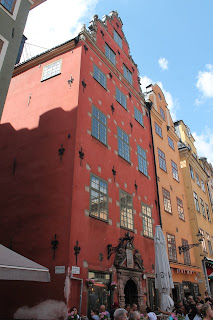 There was also an ice cream run, because of course there was. We wandered past the German Church – really, that’s pretty much what it’s called – which we thought to go into except that it was actually being used for a wedding at the time and we weren’t going to get in dressed as the tourists we were.  We also walked past this store – an antique shop – which made me think that perhaps the Swedish grasp of English was not as good as we’d thought.  Or perhaps it was better than we thought.  Whichever. 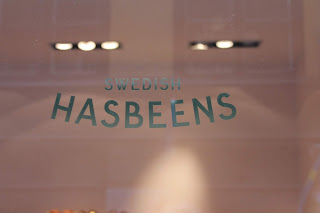 Perhaps our favorite shop, though was the Science Fiction Bookstore, which is exactly what it says it is.  Two stories of glorious fiction, mixed with games, dice, and other nerd accessories, it is a glorious and dreamlike wonderland for people like us, SF/F folks to a person.  I will admit that this had its downside, as every time I picked up a book I’d think, “Do I really want to schlep this across the Atlantic?” and then put it down.  Kim was more adventurous and did get something though.  I had fun talking about books with Helena and Maria – there is nothing so rewarding to a bookhound like me as recommending books to others – and eventually we moved on.

Mats and Helena left after that to pick up David, who was returning from camp, but the rest of us continued on.

We walked across one of the bridges through the old Parliament area and into the more modern part of Stockholm. 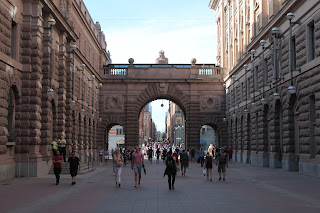 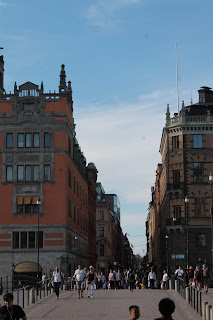 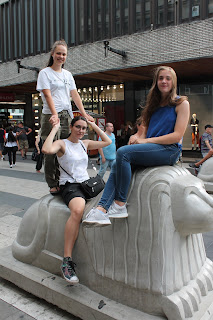 It always amazes me how colorful Swedish cities are.  American cities are fairly monochrome, but in other parts of the world they are red and yellow and any number of interesting textures and shades.  This is a nice thing. 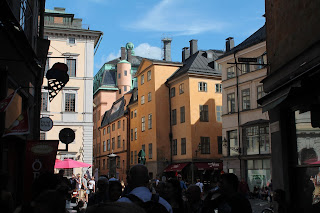 When we got into the newer part the teenagers decided to hare off on their own for a while.  It always amazes me that they’re old enough to do that, even though it shouldn’t – they have been for some time now, after all.  You forget that as a parent, sometimes, and it’s especially strange to be reminded of that in a foreign country.  But it’s a good thing too.  So Sara, Kim, and I found a little coffee shop and hung out for a bit, resting our old bones while the young’ns wandered about unsupervised.

And here I have to put in a word for portable wifi hotspots, which I had never used before.  Sara had one – a little thing that fit neatly into a pocket, but which you could log into and suddenly your phone could actually make and receive text messages.  Messages such as “we’re in the coffee shop” and “what coffee shop again?” and “no, this one, not that one,” and so on.  Immensely useful thing.  I will have to look further into this, said the man whose grasp on technology pretty much ended in 2009.

One of the other places we wanted to go back to from our last visit was the pizza shop where we ate in 2012.  Turns out it’s still there!  We got on the subway and found our way back to clear on the other side of Gamla Stan and had a wonderful lunch. 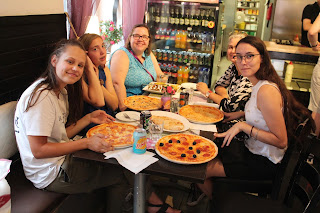 After that it was time to go back, so we made our way around the various islands and waterways until we found the car.

I spent much of the evening grading exams for my summer class, which my colleagues were kind enough to scan and email over to me, but everyone else did more entertaining things until it was time to call it another day.
Posted by David at 10:11 PM

Hasbeens is a PERFECT name for an antique shop! I love it.

I thought so, but there is a negative connotation to the English phrase "has been" that I'm not sure they really want. :)

Now that is a capital idea! I wonder if my local library does that. I will have to check.