Our Trip to Europe: We Spend a Day Relaxing in Wevelgem, and Kim Arrives!

When we started planning this trip across the water we quickly realized that it was going to take some thinking to make it all work out.  We knew it had to be in August, but fitting it into August was a delicate operation.

I was fortunate enough to have the opportunity to teach a summer class – the Atomic Bomb class that two of my colleagues and I developed a couple of decades ago and which has been offered irregularly ever since.  It’s a great class, but since there’s three of us teaching it they don’t let us teach it very often.  It’s expensive, even if we do divide two salaries among the three of us rather than push for one each.  And given that the physics guy officially retired more than a dozen years ago we’re never sure if we’ll do it again.  Someday he may retire for real.  But we were up and running with more than two dozen students, and if it made vacation planning trickier it was a nice problem to have.

Similarly Kim had work commitments of her own, with an online chemistry class that required its students to meet up at Home Campus for a couple of weekends of intense lab work.  Her last lab weekend came a couple of days after my last lecture for the Atomic Bomb class.

On the other end of the month, Lauren had band camp up at Local Businessman High to attend and Tabitha had to move into her dorm room at Small Liberal Arts College a day after that, so there was a very definite cutoff date by which we had to be back and relatively functional in our home time zone.

Eventually it worked out that the girls and I would head out on the evening of August 2 – my Atomic Bomb colleagues agreed to proctor the final exam and send me my part to grade in addition to the papers that I took with me on the flight – and arrive on the 3rd.  We would then get to spend a few days in Belgium with Fran and her family.  Kim would do her last lab weekend and arrive on the 7th, where she would at least get to meet them before we left for the rest of the trip.

Given that setup, our original plan for that Tuesday was to spend the morning exploring Brussels since we had to pick up Kim from the airport that afternoon anyway.  That plan kind of fell by the wayside once we realized how long of a day Monday in Paris would be, so rather than run ourselves ragged we decided that we’d have a nice low-key sort of day in Wevelgem, hanging out and generally enjoying the company we were with.

It was the right call, most definitely.

Fran, Roeland, and Veerle came by the B&B at a much more reasonable hour than we’d gotten up the previous day, and we had a nice breakfast out on the picnic table with them and Ilse and Wim.  The sun was up, the morning was still cool, and the food and company were marvelous – seriously, days don’t start any better than that. 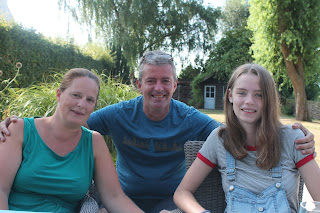 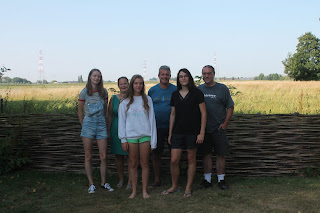 Roeland rode his bike home, since we were too many for the car otherwise, and we met him back there at a relaxed time of the midmorning.  Again, food and conversation were the order of the day, though Veerle did graciously volunteer to throw our clothes in the laundry so they’d be clean for the next stage of our travels.

Eventually Roeland and I got in the car and headed off to Brussels to pick up Kim while Tabitha and Lauren stayed in Wevelgem to spend time with Fran.  There’s an app that Roeland had on his phone that allows you to track pretty much any flight anywhere on earth, so as we approached the airport we could see Kim’s plane nearing Brussels, swinging around it in a kind of a loop, and then descending for a landing.  By then we’d parked and established ourselves at the cafe across from the doors where people exit the airport, which was a great place to be.  We waited there for Kim to clear passport control.

When Tabitha, Lauren, and I arrived on the 3rd we had a pretty quick trip through that process, but whoever staffs the passport control booths had clearly underestimated the need this time.  When Kim got into the line there was exactly one booth open, and by the time they figured out that perhaps they needed more staff the serpentine line was out the door.  It took her an hour to get her passport stamped.  Fortunately the cafe was happy to let us sit there, even if I did bob up and down to check the door every few minutes.

I still managed to miss her as she walked out, but we connected over by the little convenience shop near the restrooms.

The ride back went well, and eventually both families were united in full at the table!  We of course had to commemorate this. 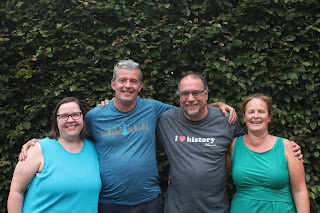 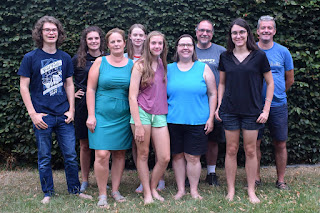 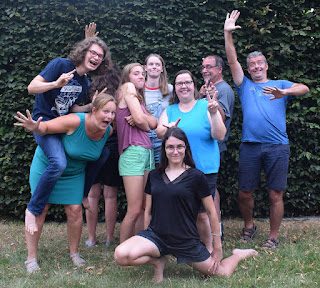 For dinner we had “gourmet,” which is a very Belgian thing to do though generally not in the summer.  It’s more of a winter thing, and once you try it you’ll see why a 35C (92F) day is probably not what it was designed for, but you know what?  We were there on a hot summer day and we had gourmet and it was really, really good.

Basically it’s a tabletop grill sort of thing where everyone gets a miniature pan and you put meats, potatoes, veggies, and cream in your pan – or whatever you want, really – and cook it until it’s ready.  It’s a fun meal in that it involves a lot of cooperation and commentary on everyone’s choices, and it’s the sort of thing we should try to make catch on back here in the US.  You can find the cookers here under the general heading of “raclette,” apparently, so we’re halfway there! 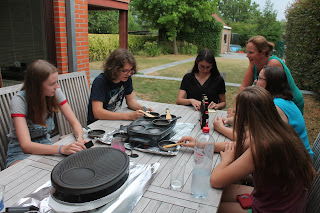 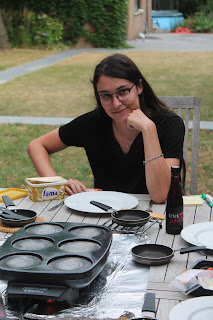 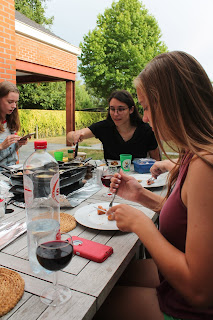 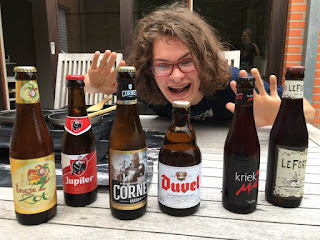 Most things go well with Belgian beer if you like beer – as with chocolate, it’s hard to find a better place for it than Belgium.  I’m not a beer drinker, but Kim enjoys it.  The drinking age is also much lower in Belgium – low enough that Tabitha could try it legally.  She liked the Kriek lambic (second from the right in the photo above), which is made with cherries.  For my part, I was very happy with a South African red wine that Roeland and Veerle had.  I need to find it here.  It was a lovely evening all around.

We didn’t stay too late because the next morning would also be an early one, plus Kim was any number of time zones away from where she’d gotten out of bed to start her travels.

That night it rained, for the first time in two months – thunder, lightning, and everything.  It seemed a nice sort of sendoff, really.
Posted by David at 10:47 PM