Our Trip to Europe: We Do the Tom Tits Experiment

Have you ever done something just because you couldn’t imagine not doing it?

When we were in Sweden in 2012 we passed by this sign by the side of the highway. 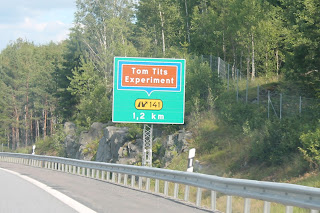 You can imagine the conversation the rest of the way home.

This year we decided that we’d actually go and see what it was like over at the Tom Tits Experiment.  And we took the children!  Because that’s how we roll, yo.

The day started out slowly, which is how good vacation days should start.  I’ve never believed that a person should need a vacation to recover from a vacation, and we try not to run ourselves too ragged.  When opportunities arise, well, sometimes that’s what you do, but not always.  So we had a nice Swedish breakfast of cheese and salami and crackers and assorted similar items, and then hung out for a while, easing into the day in good company.

It was cooler by this point in our trip – the body-temperature highs were a thing of the past, and while it was warmer than it was last time we were there (and much warmer than average for Sweden in general this time of year) it was comfortable enough for me and Mats to wear our matching hats. 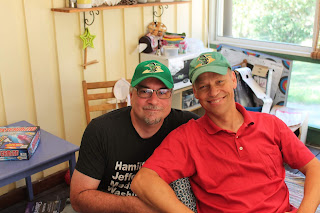 Eventually we headed out to see about the Tom Tits Experiment.  Since I do not drive a manual transmission car I could sit back and watch the scenery go by – Swedish highway signs look a lot like Belgian highway signs, it turns out – and it was a pleasant trip.  It took a bit of maneuvering to get the final few hundred meters at the end, given the construction, but we were soon there, ready for action. 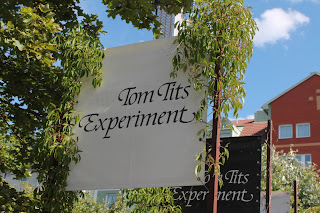 The Tom Tits Experiment is actually a science museum.  It’s kind of a cross between the Exploratorium in San Francisco, the Franklin Institute in Philadelphia, and the City Museum in St. Louis, except with dinosaurs because dinosaurs are cool.  There are several floors of exhibits inside, almost all of which have hands-on components (or belly-on, in the case of the “pregnancy jacket” that you strapped on to give yourself the feeling that you were not all that far from a trip to the delivery room), a few side hallways that led to more exhibits and such, and a large area outside with a stream running through it and various rides, exhibits, and activities for you to try. 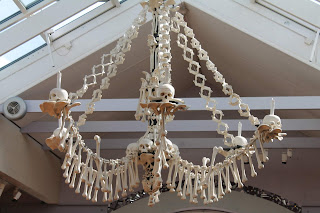 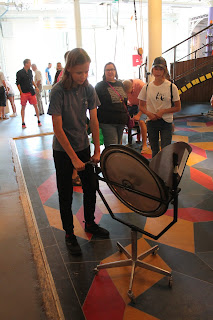 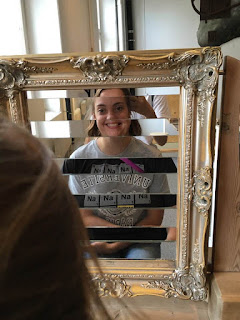 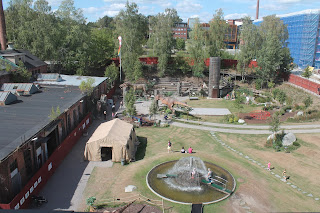 And dinosaurs.  Don’t forget the dinosaurs.  No matter how old you get, dinosaurs will always be cool. 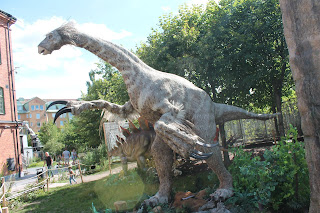 The activity that got the most use from us was the flywheel, a sort of anti-gravity training device where you strapped yourself in and spent several minutes rotating along all three axes.  This is something that you should definitely do before lunch rather than after. 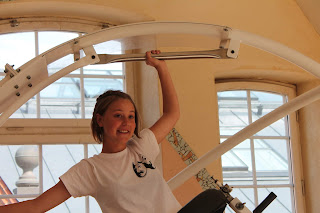 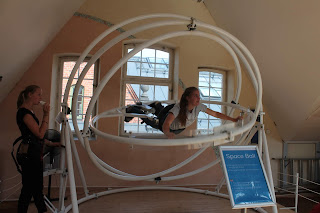 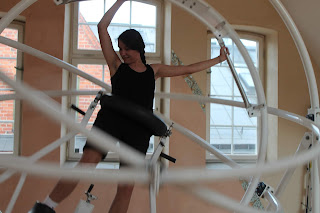 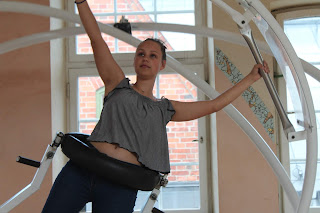 At one point we also found an exhibit that was basically a Zen Contest, which sort of misses the point but was entertaining anyway.  There was a small sunken area surrounded by a low wall wide enough for the peanut gallery to sit on and kibbitz, inside of which was a table and two chairs that faced each other.  In the middle of the table was a ball.  You put on a headset and sat down at one of the chairs to face your opponent and somehow – and you’ll have to take my word for it because you certainly don’t want me to try to explain it for real – they’d hooked up the headset to measure brainwaves and then to use that information to move the ball.  The more active your brain, the closer the ball got to you until finally it crossed some threshold and a buzzer went off and the other person won.

We played it as a round robin, more or less, and it turned out that I was the most brain-dead person there, so, win?  Maybe?  It certainly explains a lot, anyway.

We had a very nice lunch there as well – museum food has improved vastly since when I was a kid.  My dad used to take me and my brother to the Franklin Institute every so often when I was growing up, and we just loved the place – you can’t not love it, really, with all the exhibits and activities.  Kim and I took the girls there a few times as well when they were younger, and they had the same reaction.  But when I was a kid there was exactly one place to get a meal in the museum: the world’s dingiest McDonalds, literally in a dimly lit corner of the basement.  If you’ve ever wondered how McDonalds could get worse, you had only to visit the one in the Franklin Institute.  Eventually they must have dynamited it and replaced it with a storage closet, because now they have a nice food court that serves real food that you can’t actually get to because the lines are far too long.  We usually go outside to a nearby corner restaurant and have cheesesteaks because that’s what you should do in Philadelphia.  But the point is that we could have good food there if we wanted.

The food at the Tom Tits Experiment was in fact good, a tasty buffet of things that were a bit different from what I’m used to (which is kind of the point of eating in a foreign country, really), and you could get refills on your drinks and that honestly is all it takes to make this American happy.  I like this trend in museum accommodations, truly I do.

Toward the end of our stay there Lauren and Maria found the robot arm.  I don’t know what it’s called officially, but it’s basically a giant robot arm that zings you around for a while in an attempt to finish whatever the anti-gravity flywheel started.  It’s a bit of a wait to get on, but they seemed to have a good time once they got there. 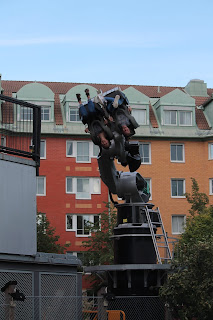 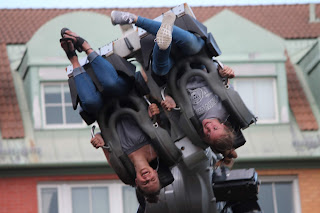 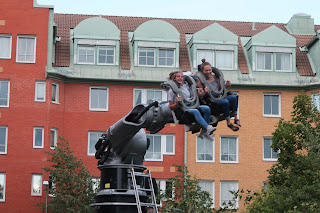 Mats and David also found the bottle rocket exhibit.  Most of us kind of sat there and watched, but they spent a fair amount of time pumping up a bottle full of air and then firing it at the museum itself.  It made a satisfying FWOOSH when it finally went off. 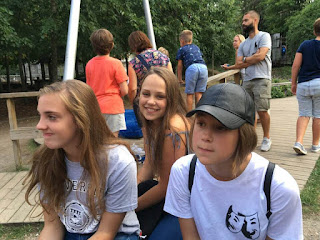 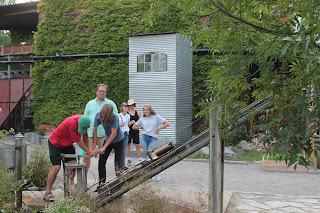 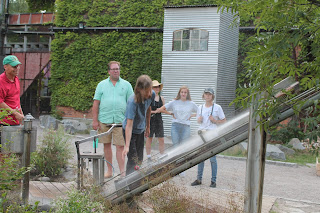 Fully scienced, we headed off, stopping briefly at a nearby supermarket to raid the place for ice cream and assorted junk food because that’s also how we roll, yo.  In fact, the more we do that, the more we roll.  Physics for the win!

Dinner was a traditional Swedish cheese pie, something that Sara said was a dish from her childhood in northern Sweden.  It was good, and we accompanied it with a bottle of wine from the Puglia region of Italy – something that probably was only exciting to me.  My grandmother’s side of the family came from that part of Italy, and it was kind of cool to have that connection.  It was pretty good wine, too. 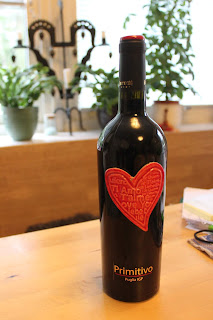 After dinner we sat around the kitchen table and played games.  We like games, though in our normal lives we don’t get to play them very much.

Tabitha took this opportunity to introduce us to something she called “paper telephone,” which is apparently a game they play at the museum where she works when things get quiet or they have staff evenings.  It’s pretty simple.  You all sit around a table, and everyone gets a small stapled packet of paper with the same number of sheets as there are people.  Both sides must be blank, and you never write on the back side of a piece of paper (that’s important, for logistical reasons mostly).  To start, you write down a prompt of some kind (for one round my starting prompt was “the gates of Hell”).  Then you pass it to the person on your left and they get 60 seconds to draw it.  Then they pass it to the person on their left and they get 60 seconds to write down what they think that drawing actually is, and the process repeats until you get all the way around.

You would be amazed at what the end product comes out to be, after a few people have had their hand at drawing it and guessing at those drawings.  The best part of the game is that once your packet gets back to you, everyone takes turns showing the group the process that their original prompt went through to get to the finished product. 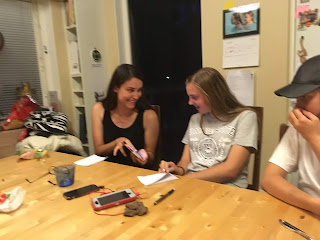 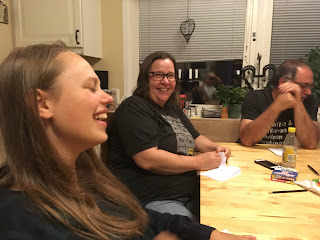 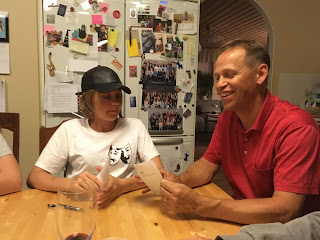 Lack of artistic talent is actually kind of a plus.

We also played a round of Phase 10, and we were all kind of relieved when somebody finally won.  The whole point of such games is to hang out with friends, of course, but eventually it’s bedtime and you have to call it a night.
Posted by David at 9:46 PM

You can actually purchase the paper telephone game as "Telestrations". Except instead of paper, it uses a "booklet" of erasable pages.
Really fun!

Huh - I suppose that shouldn't surprise me. It is a great game and it kept us entertained for most of the rest of the trip. :)