Our Trip to Europe: We Arrive in Sweden

One of the nice things about the hotel in Riga is that it provided us with breakfast.  You had to take the elevator down to the basement level and squeeze your way through the Croats, but your reward for doing so was a nice array of interesting fruits, meats and cheeses – and not the usual varieties one finds at the Hampton Inn in Maumee, Ohio (fine hotel though it may be) either.  It was kind of entertaining in a low-key sort of way.

The other thing that I found entertaining about Riga in general was the strident insistence on being categorized as Northern European rather than Eastern European.  The Baltic republics in general seem to regard this as an important distinction and would much rather be lumped in with the Finns, Swedes, and Norwegians than with the Poles, Russians, and Ukrainians.  I’m not sure why this is, though I suspect that the Cold War has a lot to do with it.  Many of the little pocket guides that you’d find lying about the hotel or pick up from random places in the street went out of their way to make this case, and you know what?  Fine.  If they want to be Northern instead of Eastern, so be it.  Northern Europe it is.

I suppose Northeastern is out of the question.

We checked out of the hotel and schlepped our bags down to the bus stop, where the 322 express was not long in coming.  We piled into the back and squeezed in among the crowd – again, far too crowded to make use of the bus pass, though since we’d paid for the ride I didn’t feel too bad about it.  It took a slightly different route to the airport – more residential than the ride out, and pleasant in a leafy sort of way – and eventually we arrived.

There’s not much to do in the Riga airport except spend down your money as you leave the eurozone on random souvenirs and candy, so we did our best before making our way to the gate.  The flight to Stockholm was short, so Air Baltic assigned us an actual propeller-driven plane that we entered through the stairs from the tarmac.

We got off that way too, when we landed at Arlanda in Sweden.  Once again we faced no passport controls or other bureaucracy, but a friend of mine recently pointed out that this was not because we were in the EU so much as it was because we were in something called the Schengen Area, which is a set of countries that have formally agreed to free movement of people within their borders.  It’s more or less the EU in practice – there’s something like a 90% overlap, with some non-EU countries included and the UK and Ireland on the outside looking in – but it is slightly different and this is why getting into the UK is more of a challenge.

Our friend Sara was delayed coming to pick us up so we had some time to spend in the airport in Stockholm.  Arlanda is a nice airport, really, so we collected our baggage (the one suitcase we’d checked in when we left Brussels) and then accomplished two missions: cash, and lunch.

The cash part was easy – Arlanda is festooned with ATMs all happy to take your debit card and spit out Swedish crowns.  And since I’d warned my bank that we’d be out of the country and please please please do not cancel my card while I’m away, it all went smoothly and I ended up with a small pile of Swedish money.

There were two things wrong with this situation, however.

First, unlike the ATMs in Belgium, which allow you to choose the denomination of euro notes that you receive, the Swedish ATMs are set up to give you the largest possible notes to fulfill your request.  I ended up with notes that looked imposingly vast until I did some exchange math and realized that they were simply unwieldy rather than excessive.  Still hard to get someone to take them, though.  It’s like walking through New York with a wad of $50 bills.

And second, getting cash in Sweden turned out to be one of the most useless things I did on this trip.  Sweden has effectively become a cashless nation.  Everything is done electronically, though credit cards, debit cards, or more often (for those who have it set up that way), through your phone.  There’s even a specifically Swedish app that allows you to move money from one place to another.  So in five days of running around the Stockholm area I never did have to get out any more cash.  I barely used the stuff I had.

What makes that even stranger is that Sweden redesigned all of its coins since the last time we were there in 2012.  The lower denomination ones are now bright copper rather than nickel – which I thought was actually quite handsome – and they are different sizes too.  It seems a lot of effort for something that people don’t use anymore, but then the US recently redesigned the penny so I suppose that’s just how it works all over.

You should know that Swedish 7/11s are not like American 7/11s.  For one thing they have salad bars – big, fresh salad bars, full of enticing things – even in the airport.  They also have sandwiches and sausages and in general actual food that you don’t need a Master’s Degree in experimental chemistry to produce.  Although Swedish hot dogs are unfathomably long, particularly in relation to the bun, which is surprisingly short.  There’s a marketing opportunity there somewhere.  For another thing, there is a refreshing lack of the usual American 7/11 ambiance of despair.  It was actually a cheery little place.  You have to like that.

When Sara arrived we piled into the car and drove to our friends’ house outside of Stockholm, where we sat outside and caught up with each other. 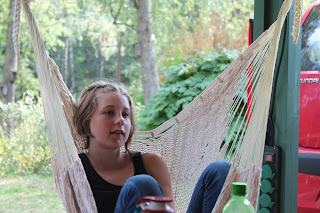 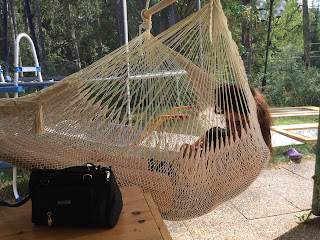 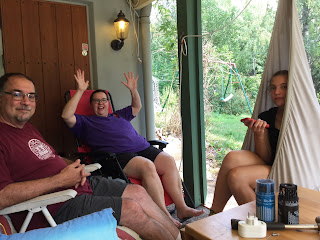 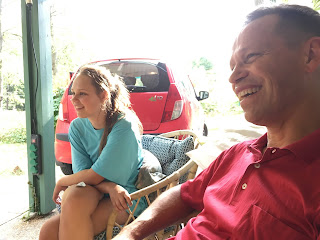 After a while Mats, Helena, Tabitha, Lauren and I went down to the nearby lake while Sara and Kim went swimsuit shopping.  It’s a lovely spot, and eventually everyone regrouped there, paddling about. 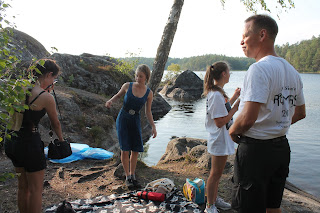 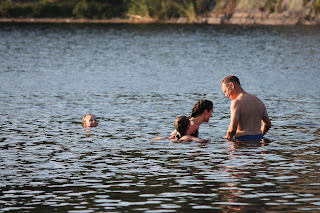 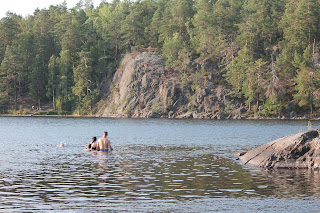 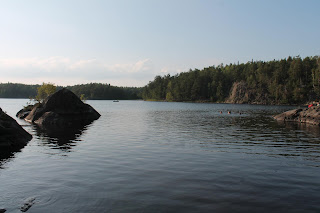 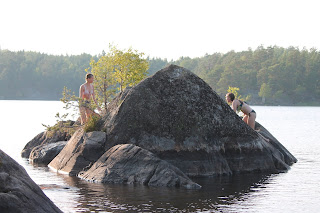 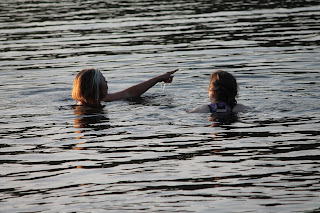 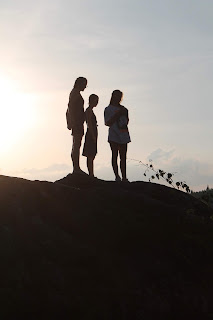 At some point the teenagers found a small snake and spent some time examining it, much to the consternation of the snake, who was finally allowed to go on his way with no harm done and an exciting story to tell all of his snake buddies the next time he saw them.

When we got hungry we went back to the house and had a lovely dinner.

Afterward Sara and I went to the grocery store to stock up on various things.  I enjoy going to grocery stores in foreign countries and seeing the different things that people eat, and Sara and I make a very good Grocery Team.  We got there only a few minutes before it closed and we had that place cased and looted long before the lights went out.  If you need your groceries professionally obtained, we’re available for hire, at reasonable rates.

The rest of the night we spent on the porch, munching on the varieties of potato chips that you cannot find in the US – one of my side-quests – and planning for the next day’s activities.
Posted by David at 9:44 PM