We spent this morning watching a radio show.

One of the weirder things in broadcast media is the fact that radio shows have live audiences.  The whole point of radio, after all, is that you can’t see any of it – it’s medium entirely dependent on sound and really you could do the whole thing from a dark closet if you had the proper microphones and transmitters.  And yet, for the second time, we were in the audience for Michael Feldman’s Whad’ya Know?  It was brightly lit. 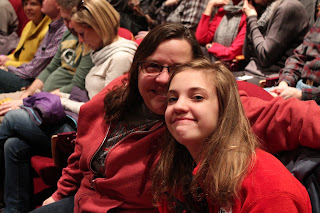 If you’ve never run into this show, you’re missing out.

It’s a quiz show, in roughly the same sense that Groucho Marx’s old You Bet Your Life was a quiz show, where the quiz definitely happens but really isn’t the point of the show.  At some point an audience member (not me, though I did raise my hand) will be called up to the stage to answer questions – assisted by someone who calls in and answers a qualifying question – and prizes will be awarded.  And that part is fun.  But getting to that point is more fun.

There are a number of recurring features, my favorite of which is called Thanks For The Memos, where Feldman reads “actual memos sent in by actual listeners” from their workplaces.  There is one that I heard nearly two decades ago that I still use in my US2 course.  It read, almost in its entirety, “To honor the passing of former President Richard M. Nixon, the Washington DC branch of the American Civil Liberties Union will be closed for exactly eighteen and one-half minutes.”

It takes artistry to twist the knife like that.

We got to the Monona Terrace in Madison in plenty of time, which was a pretty good achievement considering how many short errands we had to run on the way and how many health checks took place before we left.  It’s that time of year, when the colds rear up and make their presence felt.  I’d never been to the Monona Terrace before.  It was designed by Frank Lloyd Wright but turned out to be a pretty good building anyway, since it was built long after he died and my guess is that they softened some of his more strident demands.

They check you in by the auditorium, and then you can help yourself to the coffee and donuts in the lobby before you head in.

There is always jazz.  Apparently Michael Feldman likes jazz.  There is a pianist who has been with him forever, as well as a rotating cast of supporting musicians – today there was a bass player.  They’re quite good. 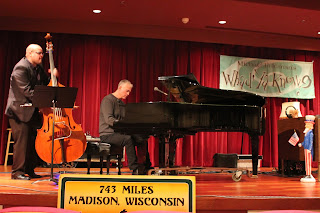 The guest today was Bill Bryson, whose books I enjoy immensely.  I even brought my copy of his most recent book – The Road to Little Dribbling – on the theory that he would be there in the auditorium as part of a promotional tour and might autograph it.  But he just called in from England, which was disappointing, although the interview itself was a lot of fun.

Feldman specializes in back-and-forth with his audience and guests, and he was in good form today.  I’m going to miss this show when they cancel it this summer.  I’m not sure why, after 31 years, that is happening, but there doesn’t seem to be much to be done about it at this point. 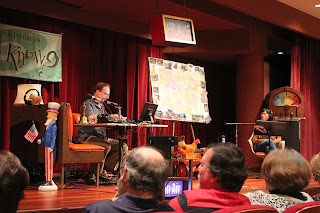 Kim and I went to the 10th Anniversary show back in the mid-90s, and we were glad to get back one more time before it all came to an end.

My wife and her parents and I went to a taping of "Wait, Wait, Don't Tell Me!" many years ago, it too was a blast!