A Wedding in Wisconsin

I stopped by the courthouse today and dropped off the paperwork, so it’s all official now.

One of the odder things that has happened over the course of my life is that I have become an ordained minister in two different offbeat churches.  The first one, which I joined on a whim one day back in 2007, is the Church of the Latter Day Dude, based on The Big Lebowski.  That one doesn’t actually qualify me to perform weddings in Wisconsin, as I discovered when a friend of mine asked me to do that a couple of years ago.  But the Universal Life Church does, so I joined that.  The ULC is fine with Dudeist ceremonies, so win all around.

And since the basic theology of both of these churches essentially boils down to “don’t be a dick,” I saw no conflict between them and my own actual faith.  Much of Christianity falls under that rubric, really, and I wish more people who call themselves Christians would remember that.  But that is another blog post for another day.

So I can perform weddings here in Wisconsin, is what I’m saying.

My friend John found this out recently.  He and his partner were looking for a quick and quiet ceremony and asked if I would be willing to do it – either that or Kim volunteered me to do it when she found out what John was looking for.  The line is somewhat blurry.  But in any event I said I would, and we met a couple of weeks ago to figure out what they wanted.

It turned out that Mark is a fan of The Big Lebowski.  So that was settled.

The ceremony was Monday night at John and Mark’s home.  It was just the three of us, plus two of their friends to serve as witnesses.  We stood there in the living room as I gave my homily – a proper Dudeist invocation centered on the idea of Abiding with each other – and then, as I am legally empowered to do (a fact which still amazes me somewhat), I pronounced them married.

They’re legally empowered to do that now too, even here in Wisconsin, thanks to the Supreme Court’s recent recognition that the Constitution’s guarantee of equal protection under the laws makes the bigotry of the small-minded irrelevant.  Sometimes the Court gets things right, and for that I am glad.

I’ve always loved weddings – small ones, big ones, fancy ones, plain ones, all of them – because at the center of a wedding are two people pledging their lives and hearts to one another, and that is one of the most astonishing things that human beings can do.  Things don’t always work out, of course, but at that moment magic still exists and everything is possible.

And sometimes things do work out.

Congratulations to John and Mark.  I wish you a lifetime together. 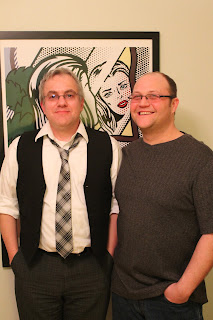 Mazel tov! Congratulations! All the wonderful things to John and Mark!

And hooray for happy things!