Return of the Turkeys

I had a poultry-free living room for nearly 72 hours earlier this week.

And then the turkeys arrived.

As part of Lauren’s campaign to enter all of the animal divisions in the 4H premium book, one category at a time, she talked us into raising turkeys last year.  And it went pretty well if you overlook the 67% attrition rate caused in large part by the fact that domestic turkeys make chickens look smart.  The two who survived did us proud.  Regular readers of this space (I know you’re out there!) will no doubt recall the triumph of Norman at the County Fair last year – the Reserve Grand Champion – and, not far behind, Maica’s blue ribbon as well.

They were sweetly amiable birds, and honestly I still kind of miss them.

I don’t miss the roosters.  We sold four roosters to a friend of a friend last fall and they ended up as soup – apparently that particular ethnic group believes that rooster soup is lucky, or something like that.  I never did get the full story.  But the roosters had to go, and they were there one day and gone the next and the world healed over that space like it never happened.  The turkeys left a mark, though.

Naturally we have more turkeys this year.  Lauren is also angling to get into the swine project, but so far the logistical difficulties of that are proving a bit daunting.  We’ll see.

The turkeys arrived on Tuesday.  There should have been seven of them, but thanks to the fact that both Kim and Lauren believed the other had put that last one in the box we ended up with six, just like last year. 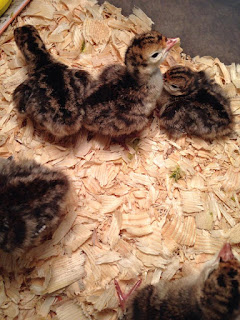 This year’s birds seem marginally less bone-ignorant than last year’s, so we’re cautiously optimistic regarding their survival into county fair season.  For example, they have all figured out how to eat.  Seriously – this counts as intelligence in the turkey world.  Last year we lost two of them because they were literally too stupid to eat.  This year Kim and Lauren put bright green marbles in their food dish and gold-colored Mardi Gras beads in their water dish, and – ooh! shiny! – the turkeys came over and began to eat and drink and you take your victories where you can get them these days is what I’m saying.

We’ll keep them in the living room until they get big enough and the weather gets warm enough so they can go out to the barn as well.  The turkey stall is still in pretty good shape, and the outdoor run is mostly still covered.  We’ll have to get in there and fix up the fencing and do some serious clearing of weeds (I’m not sure what species of weeds lives in that turkey run but whatever it is grows nearly as tall as me) in the meantime, but the hard part was done last year.

Right now they just chirp away and stagger around their little bin like tiny feathered drunks, mindlessly running into each other and the walls.  Apparently earlier this evening three of them fell asleep beak-first into their food dish.  It’s like having a clear plastic box full of miniature conventioneers, except without the tiny little fezzes.

Although fezzes are cool.

There are herds (or one very big herd) of turkeys running through our mountainy neighborhood. They (the turkeys) keep getting larger and larger. I find it intimidating, particularly since I was in a standoff with a hostile turkey last year that didn't want to allow me out of the car. Do you think wild turkeys might be smarter than domestic turkeys? Else how do the little ones grow into big ones in the wild.

Wild turkeys are almost an entirely separate species from domestic turkeys. They haven't had the brains bred out of them, and they're less friendly. Domestic turkeys have been bred to be meat on feet, and they don't last very long even if you let them live out their lives to a natural death. But they're amiable things, and that has to count for something.