I’m still catching up on a week’s worth of life.  This story is why I am so far behind, as I try not to write when I am on vacation.  There is a subtle difference between that and not writing because I’m being lazy, or because I’m too busy with work, or because I just don’t feel like writing or have anything really to say, but it’s an important difference.  It is to me, anyway.

The day after the County Fair ended, Lauren and I headed out for Philadelphia.

Regular readers of this space will of course recall that Milkshake had already been to the vet not a week earlier due to the vicious eye infection that he seemed to have contracted the weekend before the Fair officially opened, and the Crisis that this had entailed.  That visit went fairly well, and the vet had simply advised us to keep giving him his antibiotics and putting oils and unguents on both the surrounding tissue and the eye itself, a task that mostly fell to Kim since she has the veterinary training in the house.  Ask any chemist, and the odds are you will find someone who once thought they would become a veterinarian and then ran into college-level biology and switched over to something more congenial to their tastes, like high-powered chemistry.

Milkshake stabilized under this treatment plan, but did not really improve.  By that Monday morning we were pretty much convinced that the second option recommended by the vet – surgery – was the way to go.  So at 8am Lauren and I found ourselves at the vet’s office, where we learned a new word (“enucleation” – look it up) and consented on Milkshake’s behalf.  The surgery was scheduled for later that morning, when we would be on the road.

Well, that’s not entirely true either.  First we gave all of Lauren’s chickens a bath.

The reason Kim had not accompanied us with the rabbit was that she was getting the chickens ready for their cleansing, so they could go back to the barn without infecting any of the various other critters there with nasties picked up at the Fair.  The Fair had been a pretty uneventful one from a chicken mortality perspective – rather a surprise, in this summer of avian flu – so mostly we were concerned with mites and other similar stowaways.  So a quick bath in Poultry Protector seemed to be the answer.

There is still nothing quite so ridiculous as a wet chicken.  No, not even that.  Nice try, though.

Eventually they dried off and we got them set up in the barn.  The big roosters we enclosed in spaces of their own, since they have reached the age where they are getting their rooster on and can’t be left together, and then we went back home and filled up the van with our gear.

For real, this time.

It was a fairly short trip, designed entirely to visit my parents.  We are all getting older now, and when opportunities to visit come up we try to take them.  Kim and Tabitha both had to work that week, unfortunately, so it was just myself and my youngest daughter for a thousand miles across the American landscape, if Ohio and Indiana can be considered landscape.

We stopped on the outskirts of Our Little Town and raided the supermarket for road food, none of which had any nutritional value whatsoever.  We filled up the van with gas.  We settled in.  And then – the open road!  Or as open as it gets during Construction Season, anyway.

We spent a night in our usual hotel in the outskirts of Cleveland, dodging the storm that blew in just after we checked in.  Lauren spent the evening in the pool while I read my book.  Kim called with the news from Milkshake, whose surgery had gone well.  It turned out not to be an infection, though if you ever want to eat again you will not ask what it actually was.  We’re thinking of getting Milkshake a tiny little eyepatch and a sword and renaming him The Dread Pirate Milkshake (at least I’m thinking of that – I can’t vouch for any of the others).  He has spent the last two weeks recuperating and is now back to his old bunny self, if rather lacking in the depth-perception department, which is more than I can say for our checking account as bunny surgeons are apparently a rare and precious commodity and their time is measured in platinum ingots.  Oh well.

But we slept well knowing that all was resolved, and the next morning we headed out for the final leg of our journey.

It was a lovely visit.

We did our level best to overdose on cheesesteaks.  Uncle Keith came down from New York for an overnight and we took Lauren to the Giant Oversized Mall for a brief expedition before returning home to a four-person Phase 10 game (Lauren beat all of us).  She and I even went to Center City and hit both the Reading Terminal Market and Chinatown. 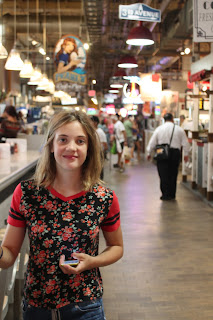 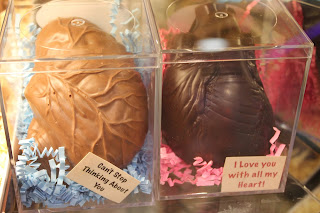 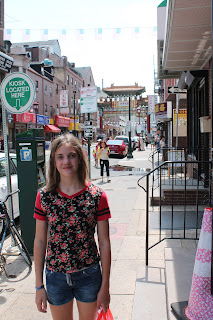 I’m not really sure why anatomically correct organs made of chocolate are a thing, but I’m glad that they limited themselves to internal ones.  They also had lungs.  And this was at the Reading Terminal Market.  The shops in Chinatown had more straightforward oddities, though since the signs were in Mandarin we mostly had to guess at what they were.

We all went out to eat a couple of times: to the local Mexican place for dinner on Wednesday – word of advice: never get an order of nachos if you will be the only one going to eat it, as it will be tasty enough to try but far too big to succeed and this will be suboptimal if you are not a teenage male who can eat anything in any quantity and not feel it the next day – and another lunch on Friday, before we left.

But mostly the point of the visit was simply to visit – to catch up and talk in person with family.  I have a great many friends who do not enjoy spending time their family, and I have therefore always treasured the fact that I do.  We are good people with each other, and there isn’t enough time in the world to spend with them.  We take what time we can.

Friday afternoon we headed back west, stopping in Pittsburgh to visit Mike and Eli (Krista being out of town, unfortunately).  Mike made a wonderful dinner for us, and then we worked most of it off walking to get frozen yogurt.  If you’ve never been to Pittsburgh, just know that there is exactly one stretch of level ground in the entire metro area.  It is six yards long and someday they will declare it a local monument and schoolchildren will take field trips to see it.  You get your exercise walking in Pittsburgh.

But again, the point was to visit, and visit we did.

We live too far away from too many people.

Lauren and I got home Saturday night, and if you think that meant we could relax then you don’t know us very well.

But that’s another story.

When Issam saw Reading Terminal Market, he thought he died and went to heaven. We have happy memories of hotdogs and chocolate chip cookies from there.

It's just the most amazing place ever, isn't it? :)