Our Trip Out West, Part 2: Settling In

We got to the YMCA of the Rockies late Tuesday night and settled into our cabin.

When I think of the YMCA, mostly I think of a large rectangular building with a pool on one end and a gym on the other.  It’s kind of drab and filled with serious people trying to get healthy or achieve exercise levels that I have no interest in reaching.  There are also large groups of buff young men - some of them wearing Native American headdresses - singing in harmony.  The YMCA of the Rockies is not that.

Oh, you can do all those things, of course.  I'm sure singing is allowed.  There is a pool.  They may even have a gym somewhere, though why they would do that is something of a mystery to me since the whole place is a) on a 45-degree angle, which makes walking from building to building exercise enough, and b) huge, which means you get a lot of exercise just walking.  It would be kind of recursive that way.

And they have all kinds of things to do, most of which I will get to later.

Mostly though, from my perspective, it had cabins.  Nice cabins.  Cabins with actual beds, full kitchens, and showers.  Yes, it is in a non-urban setting, and that makes it camping to me.  But this is my kind of camping.

This is what the cabin looked like when we got there. 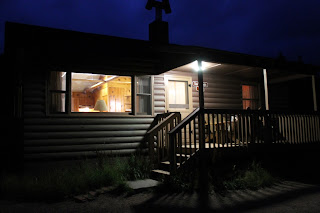 And the next morning, when you could see it, it looked like this.  We're in the one on the left. 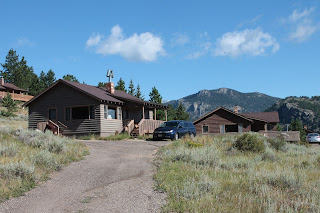 It had two bedrooms, one with a queen bed and one with three singles (two in a bunk-bed arrangement).  It had a small but functional kitchen, and room for a table.  It even had a nice living room with two couches for hanging around in, and a fireplace if you bought the wood for it.  We did that on our first night and it was cozy, especially since that night it got down into the 30s, Fahrenheit.  Apparently it snowed in the higher elevations that night, though not where we were - the staff was all abuzz with that, since that doesn't happen that early in the year usually.  The next night we discovered that the cabin also came with a thermostat and built in heat, which was a pleasing discovery even though it didn’t get that cold again the rest of our trip.  We had lovely weather the whole time, in fact – highs in the 70s, lows in the 40s and 50s.  I can handle summers like that.

The bear-proof trashcans were a bit of a revelation, though.  They’re everywhere.  They’re very serious about bears up in the YMCA of the Rockies, to the point where they warn you against leaving food out on the kitchen counter lest you have unwanted houseguests.  It’s like living in a city, only with food instead of wallets.

Once we got everything unpacked from the van on our first night there – and got the van cleared out of potato chip shrapnel so as to avoid any visits from the bears – this is what the night view looked like. 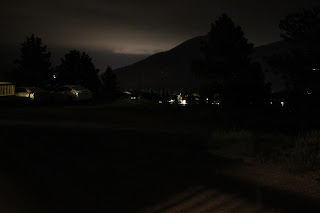 I’m not sure why, but I really like this photo.  It’s not a great photo, really - it's not even the best one I took that night, from a compositional perspective - but there is something about the way the light works that pleases me.  So that’s the one I chose.  It’s my blog.

The next morning I went out to the little deck and this is the view I got from our door. 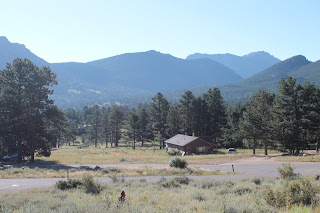 Even a city boy like me has to appreciate a view like this.  Kim and I spent a fair amount of time just sitting out there reading in front of the mountains, and it was marvelously relaxing.  I couldn’t live in a place like that – the lack of city would drive me crazy fairly quickly – but for a week it was lovely. 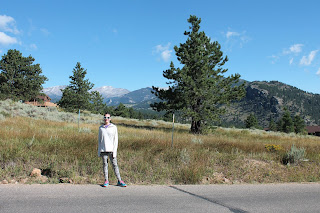 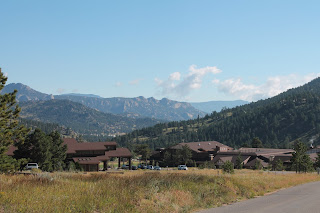 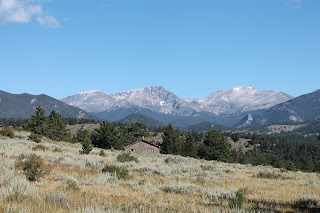 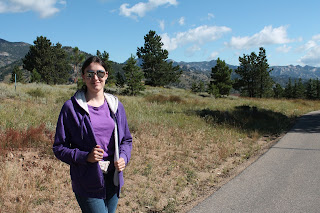 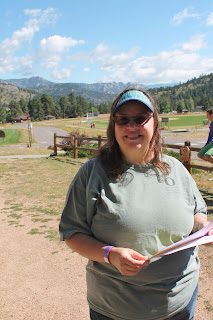 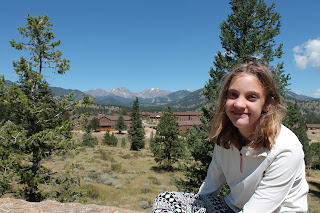 1. Don't you love a guy who uses "recursive" in daily writing? (I do!)
2. Two other cool things about the YMCA of the Rockies: it's the largest YMCA site in the world, and it's older than Rocky Mountain National Park, with which it shares a border. Highly recommended!

That YMCA looks a helluvalot better than the one I stayed at in Manhattan. I think I'd sleep on the floor at Grand Central before I slept at that place again!